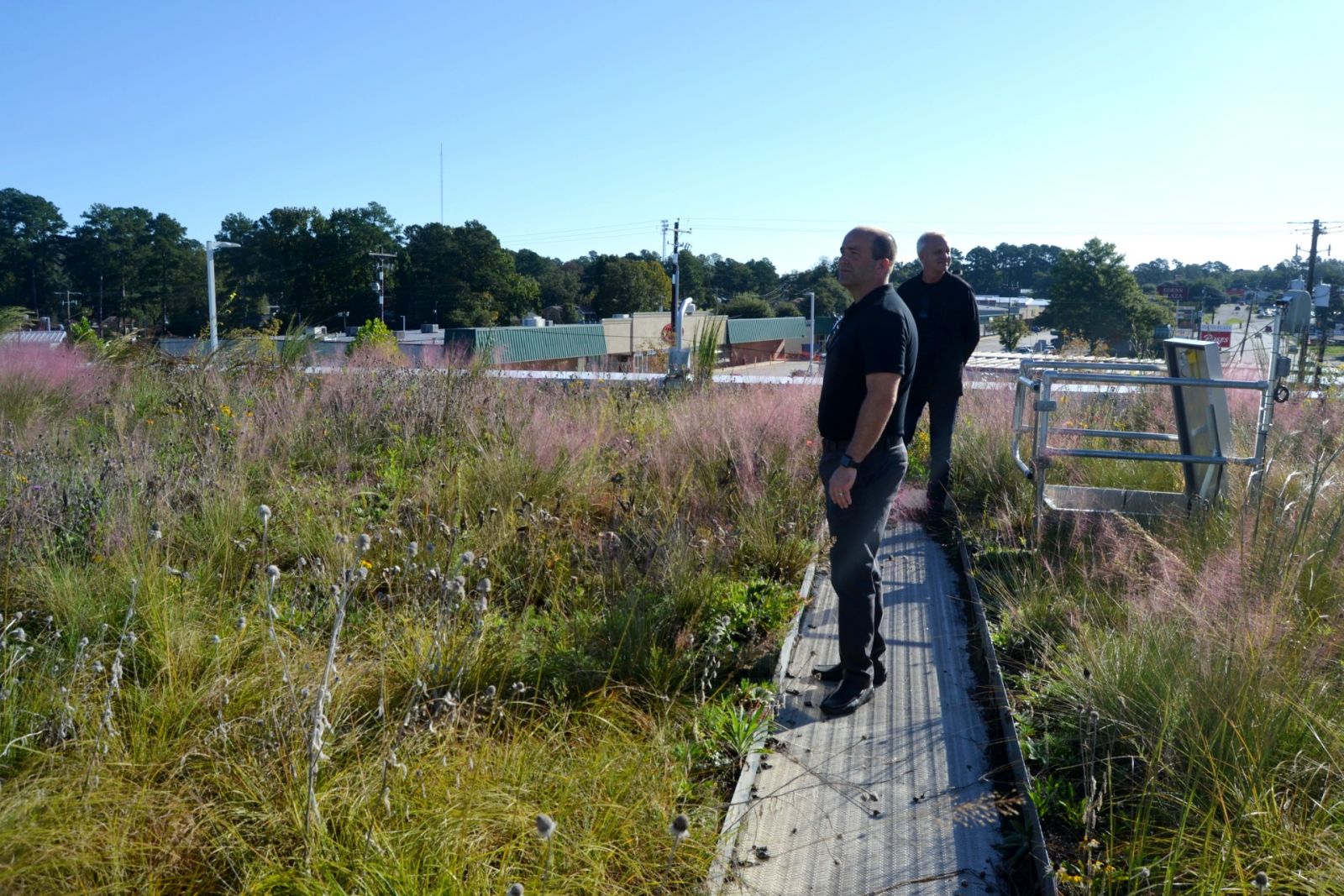 Motorists heading down Beltline Boulevard just before it intersects with Two Notch Road may do a double-take if they glance to the side, but not to worry.

That really is a garden growing out of the roof of the city of Columbia’s water and wastewater management building.

Once the site of an automobile dealership, the building is now a sustainable green oasis and the recipient of the American Institute of Architects’ South Atlantic Region merit award for adaptive reuse. Columbia architectural firm Watson Tate Savory received one of 29 awards in the region, which includes South Carolina, North Carolina, Tennessee and Georgia, for the Leadership in Energy and Environmental Design certified gold project on Sept. 16.

“One of the things the director at the time told us was, ‘I just want everyone to have a window,’ ” said Gene Bell, project manager and principal at Watson Tate Savory. “This was our response.”

The new construction includes a rooftop garden for water filtration, seven rain gardens sprinkled throughout the property to help funnel rainwater into the aquifer, and reconfigurable walls made from recycled materials.

Environmental assessments and cleanup had to be done before construction began on the site, which also features a repurposed body and maintenance shop.

“This was also a brownfield site,” Bell said. “We had contamination from motor oil. Longtime hydraulic pumps were in there. We had tanks we had to dig up and dispose of.”

The result is a far cry from the blighted building abandoned after its time as a car showroom. Inside the sleek, 60,000-square-foot glass-and-steel building, an overhead linear light monitor collects and reflects sunlight throughout the north-facing entrance and onto tile made of beeswax and linseed, while sunshades raise and lower in response to the rising sun and office sensors automatically dim lights.

“This building was conceived as a glass prism,” Bell said. “All the offices and personnel spaces are pushed to the perimeter, and where you would normally have mechanical units and stuff on the outside, we put that on the inside to give people as much light as possible.”

The building houses administrative staff for the city’s water distribution and wastewater programs as well as technicians and a fleet of vehicles, from cars to dump trucks, which make another project achievement all the more remarkable. The site was previously covered in 100% impenetrable asphalt, which created erosion and flooding due to stormwater runoff.

The existing asphalt was re-milled to make it more porous, reducing its imperviousness by more than 30%.  Overall, 83% of project construction waste was recycled, and water use was reduced by 40%.

“What sustainable really means is that it’s gentle on the earth, it uses fewer resources, and it’s gentler on the people who use the building, so it increases productivity,” said Tom Savory, principal at the firm and project lead designer. “The primary goal ultimately with sustainability was to get to net zero, which means you don’t use any resources. … That’s really the goal, to produce energy and use less water, or no water. It’s having less of a footprint.”

Previously, staff members were housed in a circuitous, windowless building that Savory called a “rabbit warren.” The expansive, light-filled space and streamlined design of its replacement has been a welcome contrast.

“It’s great. We don’t have any issues,” said James Johnson, water distribution and maintenance superintendent. “There’s a lot of light, compared to where we were. … You work where you have to, but this is definitely a change.” 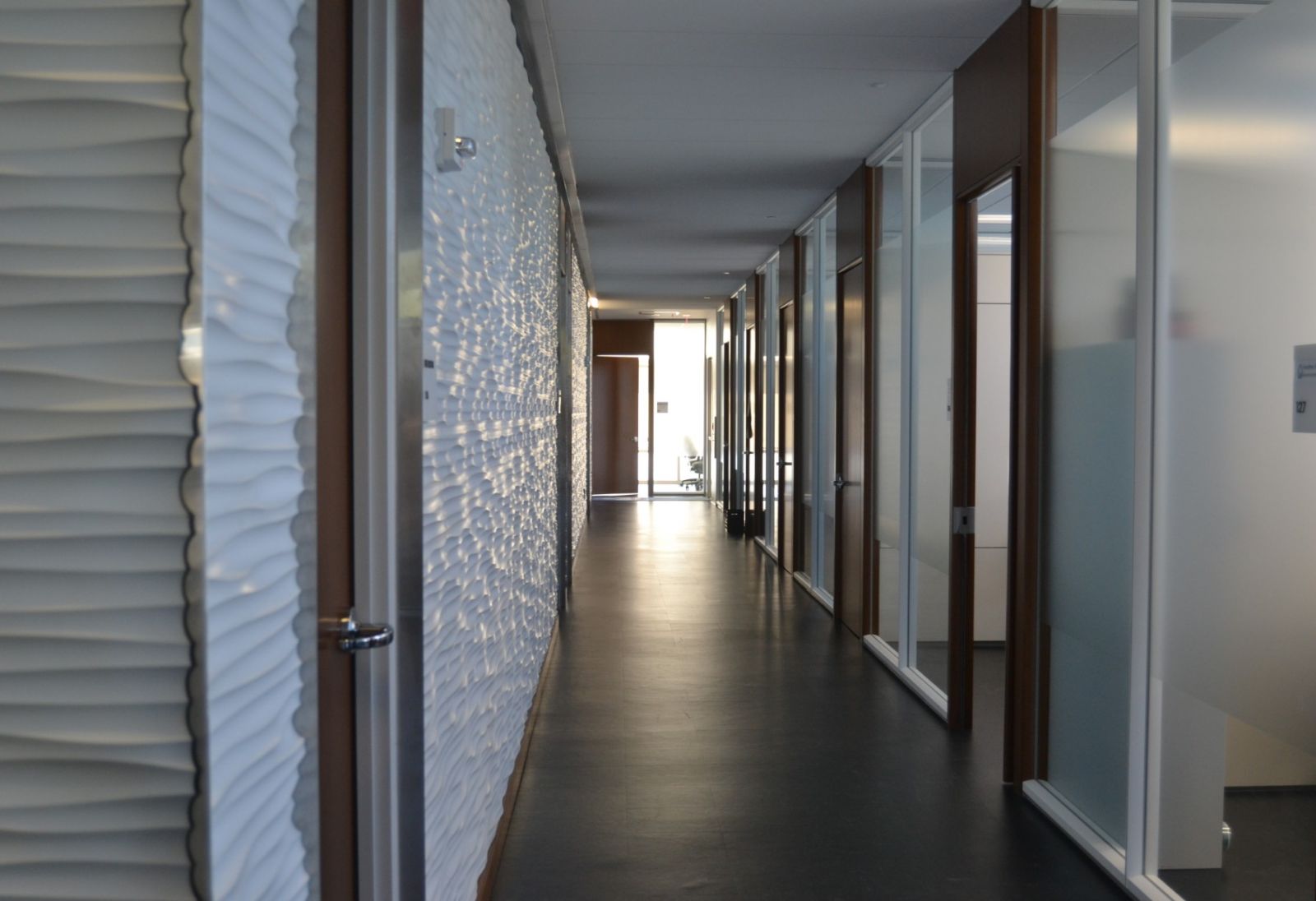 The crown jewel of the project is a rooftop garden that slows the absorption of rainwater, filters it of pollutants and reduces the containments it picks up on its way through the soil. Accessible by a ladder affixed to the wall in a janitor’s closet, the garden is an unexpected pop of wildflowers, grass and butterflies in the middle of an urban thoroughfare.

“It’s really cool to see the juxtaposition between the grass and the modern building,” said Bell, who  lives nearby and has fielded calls from friends and neighbors concerned that his firm’s fancy project appeared to be covered in green stuff.

The green roof is one of a handful in Columbia, Bell said. The University of South Carolina’s Darla Moore School of Business has another, as do two other USC buildings with projects designed by The Boudreaux Group: the Green Quad student dorm learning center and the School of Journalism and Mass Communications.

“It also increases the life of the roof itself, because the roof is completely covered,” Bell said. “The sun doesn’t hit it and it’ll last 50 years longer than typical roof.”

Equipped with a sprinkler system as it was being installed, the rooftop garden now receives drip irrigation that measures rainfall so it “only comes on when it absolutely has to to maintain plant growth,” Bell said.

“It’s pretty proactive for the city of Columbia to have done this,” Savory said. “It’s unusual here.”

The project, completed in 2017, has also received a 2018 AIA South Carolina award for adaptive reuse as well as a 2018 merit award for new construction from the state organization. It also got a 2015 nod from AIASC in 2015 for unbuilt work as logistical planning delayed its start before Columbia Mayor Steve Benjamin became a vocal cheerleader, Savory said.

“Somewhere in that period of time is when the mayor really got on board with the idea of getting this thing done, and he really championed sustainability,” Savory said. “At that point, everybody had already agreed it was a good idea, and we had gone through the process of designing it that way. (Then) it was full-speed ahead.”

“Each of us probably has a different level of passion about (environmental issues), but it’s just part of the firm culture,” Savory said. “The awards are a byproduct. The awards are an indication to us that we’ve done something right, but we don’t design to get awards. If we do it with integrity, the awards will follow, usually.”