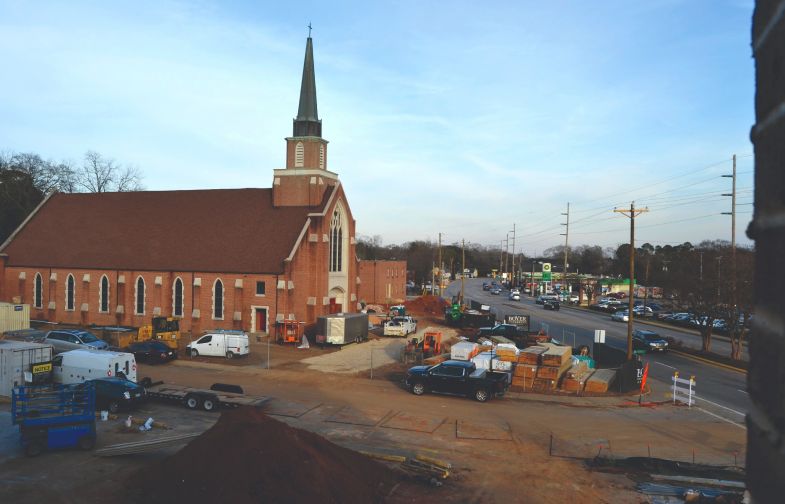 The former Rosewood Church is being transformed into luxury apartments in a project that will also include a mixed-use retail building. (Photo/Melinda Waldrop) 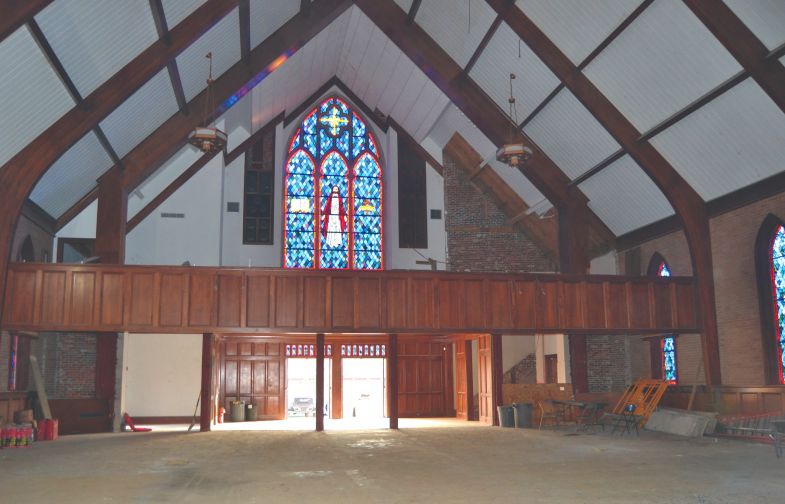 The occupant of the large front apartment in the former Rosewood Church will have this singular view in the form of the stained glass window being left in its original form. (Photo/Melinda Waldrop) 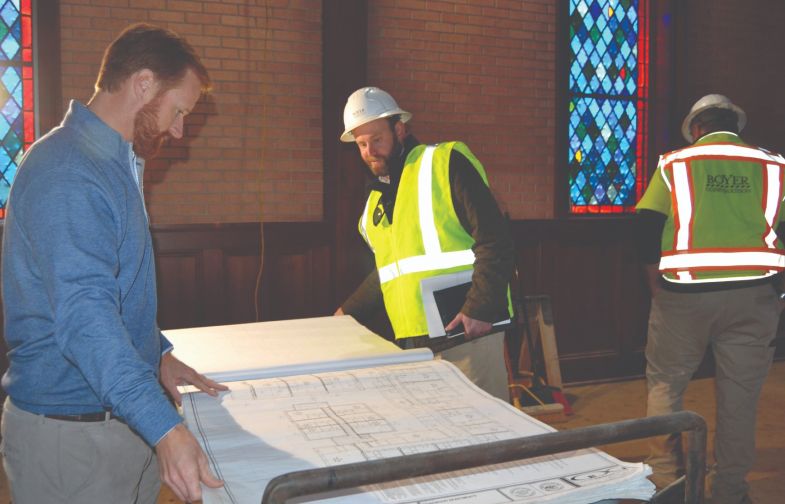 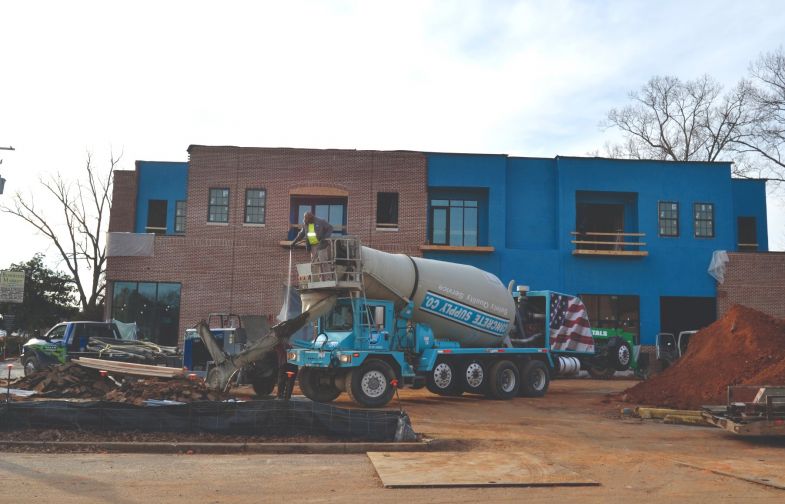 A mixed-use retail building will include three large apartments and a Starbucks along with a yet-to-be-named retail tenant. (Photo/Melinda Waldrop) 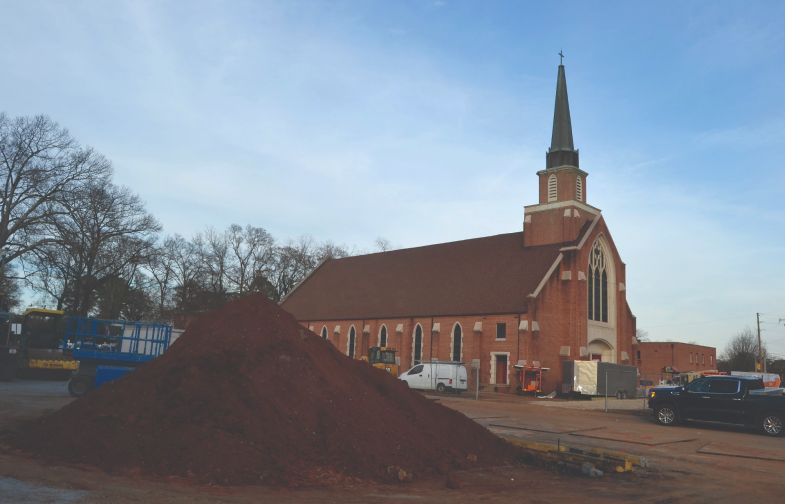 The apartments in the mixed-use building could be ready for occupancy in late spring, while the ones in the sanctuary will be ready later this year. (Photo/Melinda Waldrop)

Most churchgoing children of a certain age no doubt once sat in Sunday school class, hands laced together, index fingers pointed skyward and thumbs touching, while reciting: “Here’s the church and here’s the steeple. Open the doors and there’s the people.”

That child’s game is more or less the challenge faced in an ambitious collaboration between Garvin Design Group, Cason Development Group and Boyer Construction that is transforming a central section of Columbia’s Rosewood neighborhood.

The Columbia-based architecture firm, real estate development group and contractor are renovating the former Rosewood Church into a mix of 52 apartments, retail property and a restaurant spanning more than 57,000 square feet on Rosewood Drive in the heart of the downtown enclave.

Scott Garvin, president of Garvin Design Group, has fielded many phone calls from Frank Cason, president of Cason Development Group. When his phone rang around a year ago, Garvin listened to a proposal that struck him as “radical” but also “a really cool idea,” he said. “It’s a trend around the country, especially in bigger cities or metropolitan areas where some of these older churches that have been around for a while have not transitioned to the new demographic. We’re seeing more and more of these big, empty churches that can’t afford their real estate.”

Rosewood Church, which had occupied 2901 Rosewood Drive home since 1937, put the property up for sale in 2019. Soon after, the site landed on Cason’s radar.

“We had a local broker call about two years ago now,” Cason said. “He said, ‘Hey, this old Rosewood Baptist Church property is coming available. Would you be interested?’ I pulled it up on Google Earth and was like ‘Yes. When can we go? Can we go tomorrow?’ … I don’t know why, but immediately I thought, that’s an apartment project. It looks like an apartment building and mixed-use in some way, shape or form.”

That vision went a different direction from those who told him the towering sanctuary, built in 1970, would make a great brewery or event venue. Cason wasn’t interested in building a brewery in a sanctuary or running an event venue, but he did want to bring more density to Columbia.

“Adding residential and retail density is really important for Columbia to grow,” he said.

Once Garvin was on board, Cason’s next call was Boyer vice president Clay Sharpe, who also saw the project’s potential.

“It’s definitely a unique structure for us, but just like anything, you kind of just fit the puzzle together,” Sharpe said. “Garvin did a heck of job utilizing the space, figuring out how to get what we needed to do to get firewalls and all of that in there to meet code. What you’ll end up with are some really nice, high-end loft apartments when it’s all said and done.”

Devil in the details

The first unexpected discovery was a sanctuary constructed with a great deal of “structural integrity,” Sharpe said. In other words, unlike at Jericho, these walls were not tumbling down.

“There had to be a church member that owned a steel mill because there was a lot of steel in it, a lot of heavy structural steel,” Garvin said. “The way the balcony was framed – I’ve never seen a church balcony framed that way. It’s built like a fort. The plan was to rip the balcony down and frame the floor for the apartments, so that was a surprise. … We had to regroup a little bit on the layouts.”

There were also floor leveling issues in fashioning the sanctuary apartments, one- to two-bedroom units averaging around 1,000 square feet. They will ring a common area with two larger apartments at the front and back. Forty-nine units will utilize 45,000 square feet of existing sanctuary and classroom space, as well as a 13,000-square-foot new addition replacing an old educational building.

One of those windows may be the property’s most striking feature: the huge stained glass window rising above the balcony, depicting Jesus flanked by a Bible and a crown.

While smaller stained glass windows lining the sanctuary will be replaced to allow more natural lighting, this will be the window on the world for the occupant of the large front apartment.

“That was a subject of great debate, even in my office: ‘Do you really want that there?’ … I keep saying, ‘There’s somebody out there that would love this,’” Garvin said.

Another hot topic was what to do with the steeple, topped with a cross, that stretches into the sky at the roof’s pinnacle.

“It just seemed to make sense to leave it,” Garvin said. “It’s a homage to a church that’s been in Rosewood for a very long time. Why try to pretend that that’s not what it was? … We had that conversation for a while — how far do you go to make it not look like a church? The reality is, it is a church, it’s always going to look like a church. You can take the cross off the steeple, you could chop the steeple off, but it’s still going to look like a church, and you’re going to make it look worse. So we just decided to work with what was there and make the best of it.

“That’s kind of the roadmap for any historic project. You figure out what it was used for, what it looked like, uncover all that and try to restore it to its original condition.”

Across Sloan Street, three larger apartments totaling 3,963 square feet will top a 4,382-square-foot, mixed-use building that will be home to a new Starbucks. An additional retail suite remains available, as does another retail building at the back of the property that Cason hopes to recruit a local restaurant to fill.

That building, though new construction, provided challenges of its own, Cason said.

“Honestly, it was a struggle, because we could’ve just torn all that down and done a free-standing Starbucks,” he said. “That would’ve been a lot easier, but this is what we wanted to do. We wanted to add density.”

Upfitting for Starbucks will begin in March, Sharpe said, with an opening slated for May or June.

While the sanctuary apartments aren’t slated to be ready for occupancy until this fall, Cason said he’s received 15-20 calls inquiring about a waiting list. Prices have yet to be set, he said, but will be in line with area high-end apartments.

“That’s exciting for sure, to be able to energize this corridor. We’re hopeful that it will be a catalyst for other developments on Rosewood.”