Standing in the glass-fronted lobby of the soon-to-be-christened Optus Bank on Main Street in downtown Columbia, Mjartan can see it clearly: bank staffers — so-called universal bankers, not tellers — positioned in key spots, ready to help but not needed to open an account at computers stationed at the entrance; businesspeople seated at a cluster of booths, sketching out plans and making deals while sipping fresh coffee purchased from the barista manning the caffeine controls just steps away; the space crackling with energy. 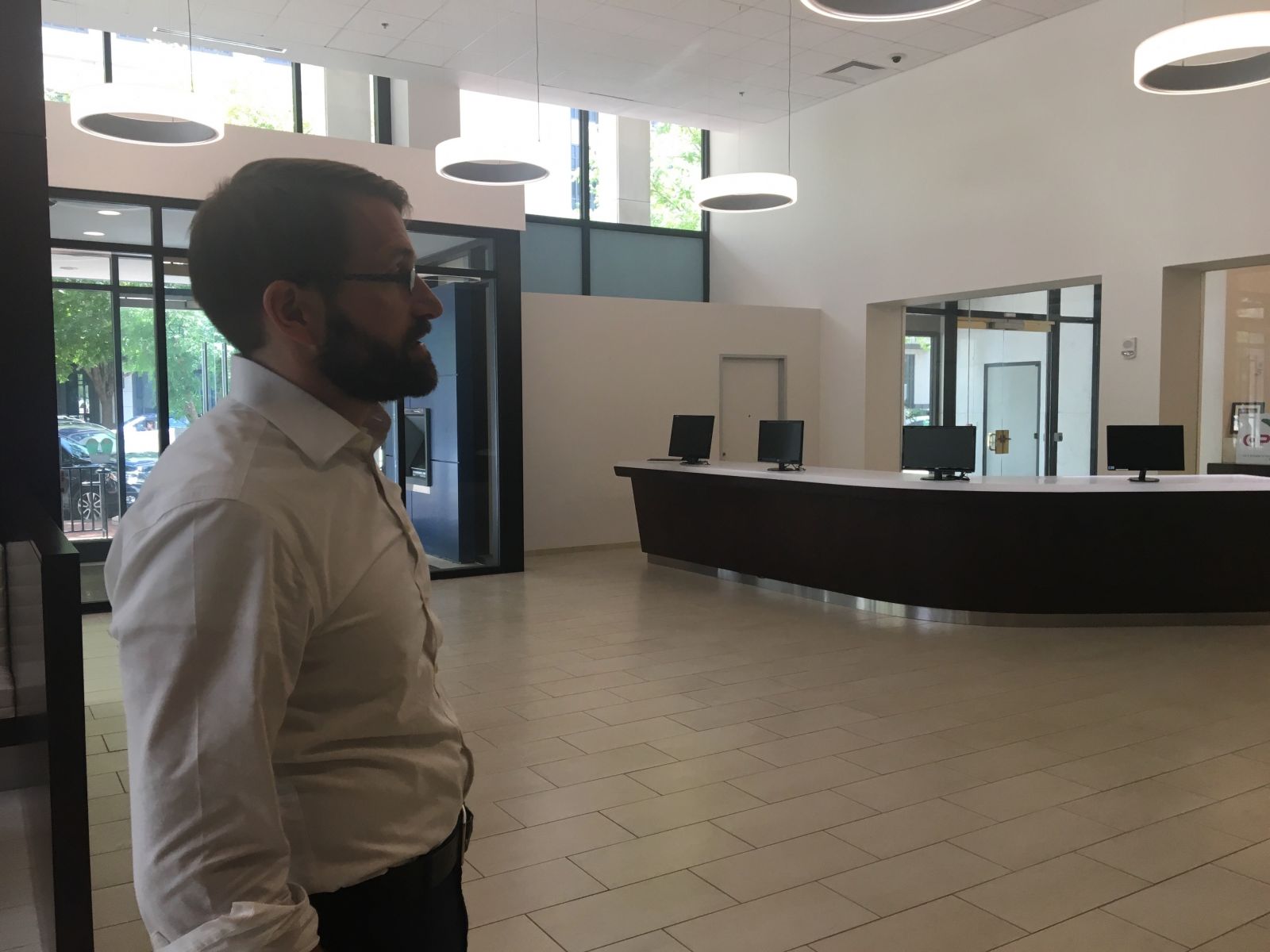 “Think Apple Store and Starbucks hybrid,” said Mjartan, president and CEO of what is still, for now, known as S.C. Community Bank. “You have the high technology. You have the exceptional customer experience, with financial empowerment at your fingertips. But you can also get a good cup of coffee.”

But the new headquarters of S.C. Community Bank, in the process of relocating from the corner of Sumter and Taylor streets to 1241 Main St., will be more than surface trappings. Mjartan sees the building as the embodiment of a rebranding that involves changing the bank’s name to Optus Bank and reimagining the way it engages with customers — even as changing industry forces drive more of that engagement outside brick-and-mortar walls.

“The reality is, most of the banking services are not going to be delivered in the bank anymore,” said Mjartan, who took over S.C. Community Bank in September 2017, inheriting an organization with a historic past mired in present-day problems. “One of the things we’re trying to do is reinvent the way that we deliver those services.”

The bank also is reinventing itself.

The organization’s roots date back to the 1921 formation of Victory Savings Bank, the first black-owned bank in South Carolina. The bank’s mission, then and now, was to help those in the community underserved by traditional banking models establish and build wealth, but that road hasn’t always been smooth.

After running into financial trouble in 1999, the bank re-emerged as S.C. Community Bank, which struggled with problem loans during the economic crisis of 2008. Mjartan, who came to Columbia after 12 years as a senior executive officer at Arkansas-based Southern Bancorp, and bank chairman Paul Mitchell have overseen a turnaround in its fortunes.

For the first six months of 2018, the bank has lost $132,000 — after losing $1.6 million in 2017. And in March, it was removed from the FDIC’s troubled bank list. A letter from the regional director of the FDIC dated March 8 informed the bank that a consent order issued on April 28, 2010, had been terminated.

The bank’s new name — Latin for “to choose” — is meant to celebrate that progress and to illustrate “the whole idea of becoming the bank of choice for people versus the old way we were positioned, as kind of the bank of last resort,” Mjartan said.

The new name will become official later this year, Mjartan said, along with a new website and other changes — including eventual investments in the blockchain technology fueling cryptocurrency and driving cutting-edge apps — that he hopes will help the bank keep growing while also enabling it to better serve its traditional customer base.

People who either do not use banking services or do not use them often can find themselves reliant on predatory lenders or less-than-ethical finance companies, Mjartan said. Easily accessible banking services, with quick turnaround, clear fee structures and fast access to cash and short-term credit can help reach that population, he said.

“Folks that are working two or three jobs and have a car broken or have a washing machine in their house that is broken and needs to be replaced, they don’t have the luxury to go shop around for the best deal,” Mjartan said. “They don’t have the luxury to wait for a decision from a bank for two or three days. They have the immediate need. How do we meet that need in a responsible way, where we don’t trap them but enable them to build wealth? ... It’s all about access.”

The new building, close to hustle and bustle of the city’s heart, signifies connectivity but also flexibility in the approach to banking. The whole idea, Mjartan said, is to give customers instant access to and the ability to move their money.

A new customer opening an account may soon be able to get a debit card printed that day or immediately synced with their mobile payment app, Mjartan said. Another customer applying for a mortgage loan won’t face a sea of paperwork or a nerve-wracking wait for a decision.

“The entire process needs to be a little more seamless,” Mjartan said. “The technology has not kept up with the demands of the consumers. One of the things we’re very sensitive to is making sure that people have control over their money on their own terms, not on the terms that the 50- or 60-year-old legacy bank system enables.”

The bank has added five employees in recent weeks to help speed that transition and is two to three months away from launching the future Mjartan can see. When everything is up and running, Mjartan pictures a customer walking into the bank and up to a computer. Using a drop-down menu, the customer will design his or her “transaction” account — they’re not going to call it a “checking account,” he said — checking boxes selecting debit cards, credit cards, overdraft protection or other details. Clearly defined parameters, such as any account fees, will be spelled out when the customer hits the checkout button.

“The future of banking needs to be not bank-centric but instead customer-centric,” Mjartan said.

The renovations necessary to make his vision a reality are underway. The building’s owner has given initial approval to interior design changes, he said, while Columbia architectural firm The Boudreaux Group has provided drawings and estimates.

Mjartan, who pointed out that the 12-story office building brings a built-in customer base for the coffee brewed at Optus Cafe, said Optus Bank plans to be open from 7 a.m. to 7 p.m. during the week with Saturday hours available.

“We want to be a bank that serves the entire community, even though we don’t have community in our name anymore,” he said. “That’s our hope, to make it a community hub downtown that folks enjoy, and if they happen to do some banking ... But no banking is required to hang out.”

This story first appeared in the Aug. 13, 2018, print edition of the Columbia Regional Business Report.