Against the backdrop of a controversy over the Transportation Penny Tax program fueled by a state Revenue Department investigation, Richland County Council members today broke ground for a project designed to improve a busy intersection in the Summit neighborhood.

“These are our tax dollars at work,” said Council Chairman Torrey Rush, reacting to reports of a state investigation into corruption and mismanagement of program funds. “I’m excited about the progress we’re making and I just want the citizens to know that their taxpayer dollars are being used the way they’re supposed to be used.” 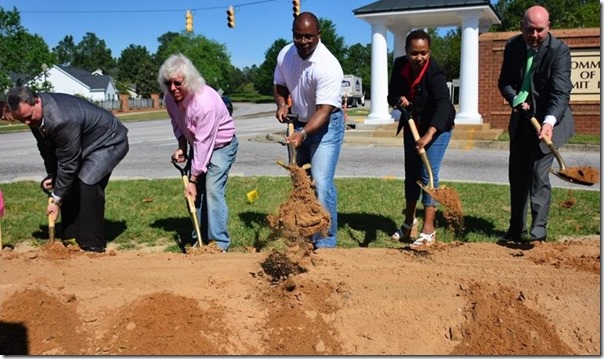 Rush, along with Council members Julia-Ann Dixon and Jim Manning, celebrated the start of the Penny Tax-funded project at the corner of Summit Ridge and Summit Parkway that’s negotiated daily by up to 20,000 vehicles, from school buses to commuters.

The intersection improvement is the first of six design-build projects packaged under a $9 million contract awarded to Columbia-based C.R. Jackson Inc. The projects are scheduled to be completed within 18 months.

On Wednesday, Rick Reames, director of the S.C. Department of Revenue, said in a letter to the council that his agency would stop making allocations into the Penny Tax fund because the county has not implemented a “common uniform standard” to ensure tax money is being spent solely on transportation projects.

The council plans to hold a special meeting this afternoon to hash out a response to Reames. Meanwhile, Rush said he’s optimistic that the council and Revenue Department can work out an agreement that keeps the program going.

Current construction projects will continue to move forward, Rush said. “There will be no suspension of contracts to date,” he said.

He added that about $100 million worth of projects have been approved for this year, and those will continue.

The Penny Tax program, which went into effect in May 2013 after being approved by Richland County voters in November 2012, is projected to generate $1.07 billion for some 40 road projects and add 17,000 jobs. Proceeds from the Penny Tax also are being used to help fund public transit.

Through March, the program’s revenue totaled $191.6 million, including $141.3 million in sales tax revenue, and $83.1 million has been spent, according to monthly updates posted on the county website.

While progress has been made in resolving problems that the Revenue Department has with the program, Reames said in Wednesday’s letter that there’s an “absence of a uniform standard for determining qualifying expenditures to ensure all Penny Tax revenue is spent specifically on transportation-related projects.”

In December, the Revenue Department first notified the county that it had turned up evidence of mismanagement of funds and “illegal activity by individuals and/or companies.”

Both men pleaded guilty to charges and Washington was later removed from office by Gov. Nikki Haley.

Revenue Department investigators also have turned over information to SLED to determine if criminal laws have been broken. Rush said the county has not heard anything about how the SLED probe is progressing.