From the March 27-April 9, 2017 print issue of the Columbia Regional Business Report

But when he got an opportunity to shadow home builder John Covert, Boring found he had to spend some time in the office before heading to a construction site to watch workers put the finishing touches on a four-bedroom house. 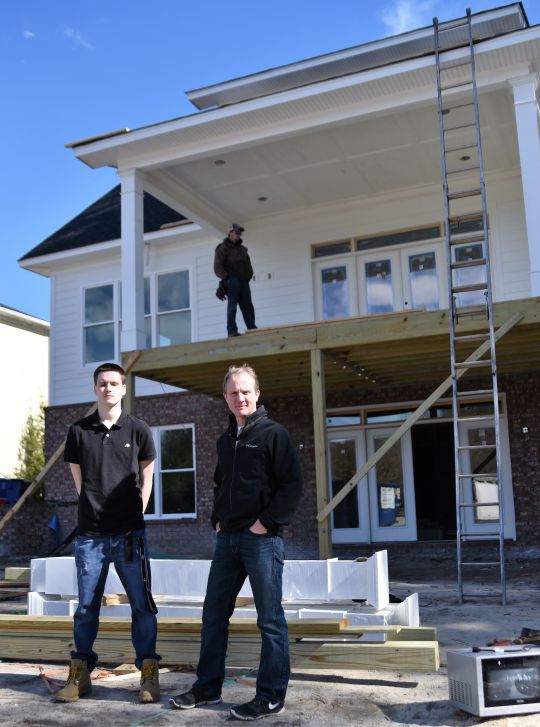 “We started the morning talking the business part of it,” said Covert, founder of Covert Homes, a custom-home builder based in Blythewood. “There are a lot of sharp, smart contractors out there who really don’t know how to run a business.”

Learning how to run the business was something Boring and 20 other Midlands high school students did while participating in the Feb. 9 Construction Industry Job Shadowing Day sponsored by the Midlands Education and Business Alliance (MEBA) and Building Industries Association of Central South Carolina.

The students explored a range of interests such as project management, masonry, site superintendent, electrician, architecture, general construction and civil and mechanical engineering.

In addition, students learned about current and future workforce needs, industry salaries, required skills and education, and how to prepare for a career in the construction industry.

“Job shadowing is a great opportunity for a student to explore their career interests and make informed decisions about their college and career goals,” Samantha Turner, workforce development manager for MEBA, said in a statement. “Collaboration and partnership are vital to the success of building a prepared workforce for the future.”

Besides the shadowing program, MEBA and the builders group earlier this month joined the South Carolina Department of Commerce to host 60 students and educators from Midlands school districts who participated in the “Blueprint for Your Future” program at the 51st Carolina Classic Home and Garden Show.

The program is designed for students interested in architecture and construction careers and assists them in planning career paths.

The need to find more construction workers is critical, according to a recent study by the Associated General Contractors. The trade group reported last fall that 83% of South Carolina contractors can’t find enough craft workers, compared to 69% nationwide. The shortage will likely remain as 70% of S.C. contractors plan to increase hires over the next year, the report added.

“These are jobs that are really paying good money that need to be filled, but there’s not the labor force able to support it,” said Mike Cancilla, division president of Essex Homes, and advocate of the job shadowing program.

Not all construction jobs involve skilled trades like carpentry or bricklaying, Cancilla added.

“When I started, I couldn’t tell you what a two-by-four was,” said Cancilla, who has a marketing degree. “There’s a whole variety of folks from all walks of life who get involved in the construction industry.”

Supervisory jobs require people who understand how to schedule contracts, work with homeowners and craftsmen, and keep multimillion-dollar projects on track, Cancilla said.

“You have to be able to be a good leader, a good communicator and able to work with a variety of personalities,” Cancilla said. “We look for folks who have a hard work ethic, who have a good moral compass, and who are team players.”

Covert, who has been building homes for the last 15 years, said job shadowing is one approach the industry can use to introduce “our many career paths to young folks.”

Boring said he was still exploring career paths in construction. “Whatever I could find would be fine with me,” he said.

Covert entered the construction industry as a “side gig” when he was a Highway Patrol trooper. The part-time job eventually led him to leave law enforcement, Covert said..

“I loved that job and it was hard for me to leave, but I’m passionate about this.”