BullStreet: Preserving the past, embracing the future

The transformation of the historic South Carolina state hospital on Bull Street is a blend of century-old buildings and technology of the future.

With tenants such as cybersecurity expert Capgemini and retailer REI Co-Op offering state-of-the-art outdoor products, the massive Columbia development is home to emerging technologies. Some of that technology is woven into the BullStreet District design along with sewer, water and power lines. The 181-acre mixed-use development is the first gigabit community within a city limits in South Carolina, with fiberoptic cable built into the infrastructure to provide high-speed internet access to residents.

“That was done in partnership with Spirit Communications, now Segra,” said Hughes Development Corp. project manager Chandler Cox. “As we were rebuilding all the new infrastructure for the BullStreet project, we partnered with them to put gigabit fiber into all the streets here.”

Cox said developers wanted to make BullStreet and its 20-year buildout plan “future-proof,” or ready for technological advances. That cutting-edge mindset stands in contrast to the historic — and in some cases, dilapidated — buildings of the former state mental hospital that are being preserved for reuse. 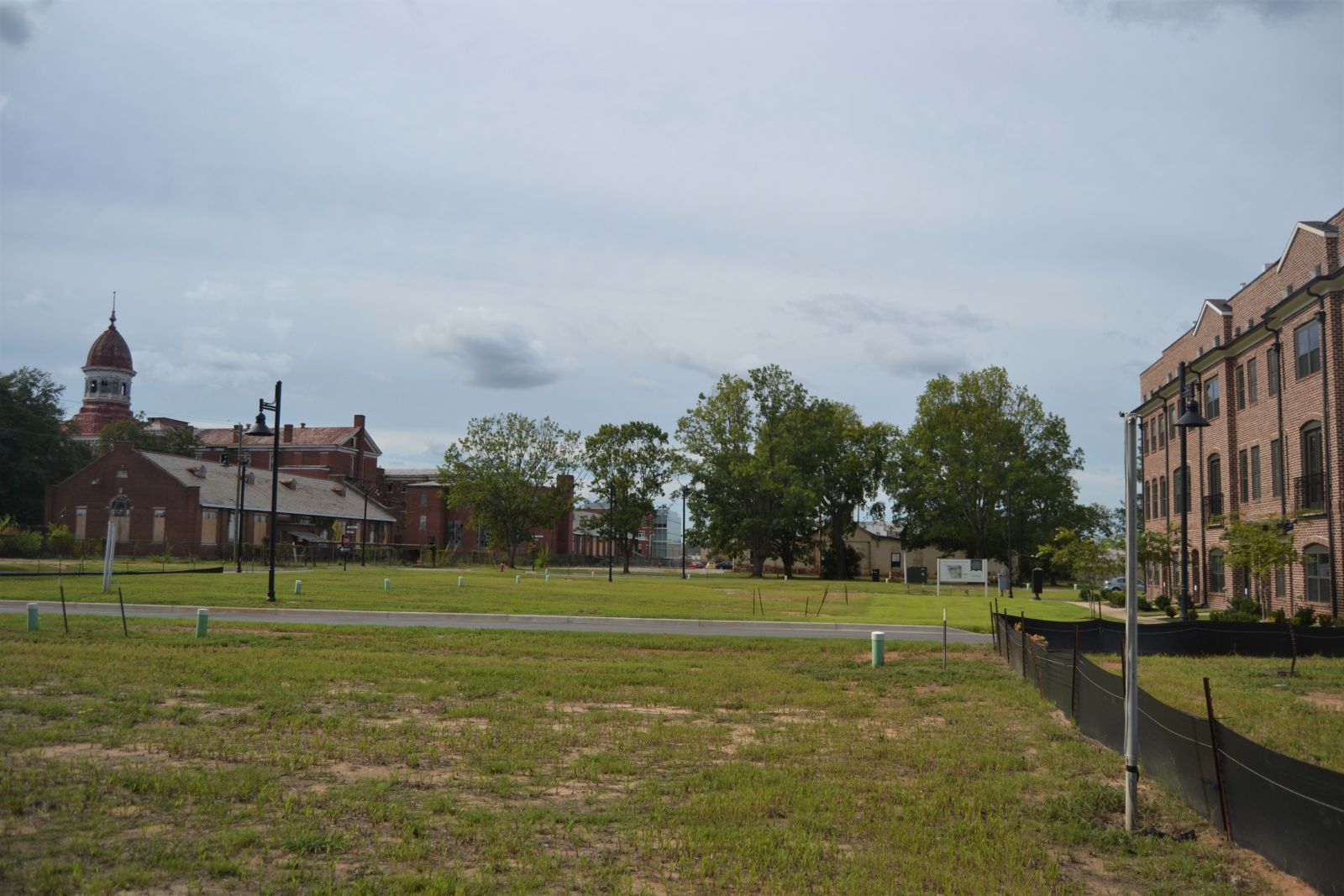 Robert Hughes, president of Greenville-based BullStreet master developer Hughes Corp., said original plans called for preserving five of the most significant structures with hopes to save as many more as possible. Developers have now found a way to save nine buildings, he said, with plans to announce a 10th.

“It’s fun and exciting to see these old buildings be brought back to life, and bring a new use to the projects,” Hughes said.

Among the preserved buildings are the Ensor Research Building, which is part of the concourse of Segra Park and has been converted into office and restaurant space; the old bakery, which houses entrepreneurial space; and Central Energy, a former steam plant which has been converted into an event and meeting venue. Hughes said there is more historic renovation to come, including the landmark Babcock Building, built between 1857 and 1885.

Although nothing has been finalized yet, Richmond, Va.-based Clachan Properties has expressed interest in renovating the Babcock building into 206 apartments, Hughes said.

“We’ve been working with a group for multiple years that is going through the last bit of approval they need, and we’re optimistic that everything continues on its plan and they are able to start in the relative near future,” Hughes said. “They’re specialists in historic renovation and we’re working with them as closely as we can to be sure they have everything they need to be successful and convert that building that’s been empty now for 23 years. … We’re very close to starting to rehab that building.”

The Babcock Building, with its recognizable spire visible from Bull Street, caught fire last December, but the blaze was contained to the roof and attic, which is vacant and has no electricity.

“It will be really fun to watch that building come back to life,” Hughes said.

Visitors to BullStreet can see the development’s progress, whether it’s noshing on a pre-game bite before a Columbia Fireflies first pitch at Bone-In-Barbeque or strolling through TownPark, the five-unit townhouse development which will break ground on its second, four-unit phase this month.

“Now that there’s been more momentum out here, the interest has continued to pick up,” said Graeme Moore, owner of The Moore Co., which is marketing TownPark. “People see the product that’s done.”

Moore said that while initial interest in the first phase of TownPark, being developed by Greenville-based subdeveloper Terranova Group, took a while to build, the remaining four units moved quickly once the first one sold last September. He said the last of the three-bedroom phase one units, priced at around $450,000, sold last month.

Construction on the two-bedroom units in phase two, which will start at around $360,000, is expected to last around eight months, Moore said.

“It doesn’t happen overnight,” he said. “One hundred and eighty acres takes a lot of time to develop. But I think they (the developers) are continuing the right direction with REI and some other projects that I know they are going to be announcing soon. I think BullStreet is poised to do great things, long-term.”

This summer, construction began on a 20,000-square-foot REI Co-op store, the Washington-based outdoor outfitter that is the development’s first national retailer. Structural steel and the top deck were slated to be put in place this month, with masonry walls nearing completion.

“We’ve tried really hard to blend local, regional and national users and create a place that is authentic to Columbia,” Hughes said.

Interior upfit work is wrapping up on the $35 million Merrill Gardens senior living center, on track for completion early next year. Nearby, grass is starting to fill in at a 20-acre park, which features a now-exposed Smith Branch Creek. Crews uncovered 1,600 linear feet of the stream that had been diverted into culverts when the S.C. Department of Mental Health controlled the property. 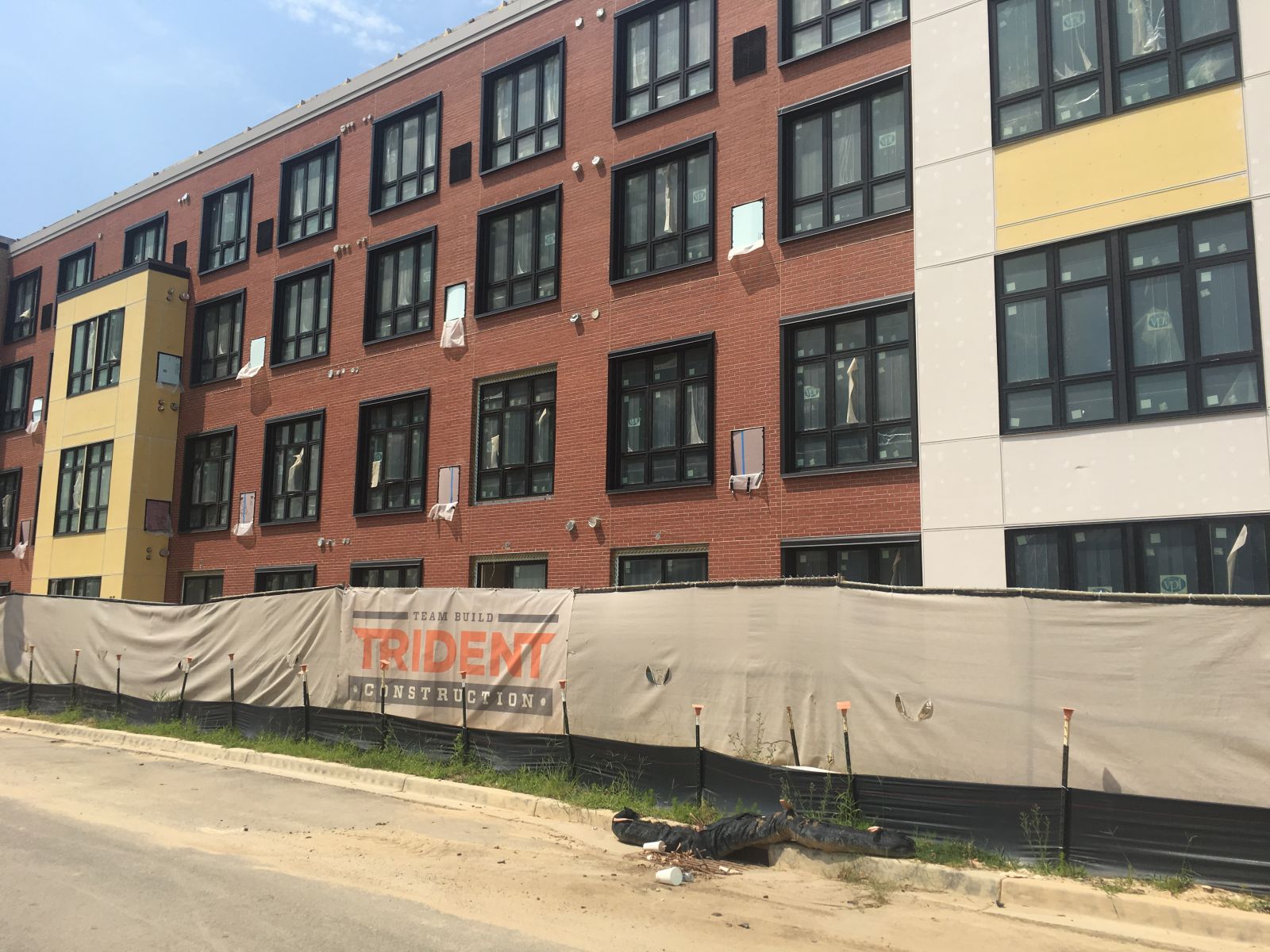 “Part of our strategy has been to bring that stream back above ground,” Cox said. “We also created a large wetland area to rehabilitate the ecosystem of the park.”

The park includes a two-acre pond, pavilion, a one-acre dog park, a walking trail and picnic tables. The park has room to grow as development evolves around it, Cox said, saying public art, a playground or more walking trail could be added. She said Hughes’ development agreement with the city of Columbia obligates the developer to provide 25 acres of public park.

The BullStreet master plan has about 2,000 on-street parking spaces and wide sidewalks designed to make the community walkable, Cox said. She expects the property to be transformed by next summer, when REI will be open and Merrill Gardens will have residents.

On Nov. 1, BullStreet announced a Starbucks plans to open in the development in the spring of 2021.

“Things are moving along very quickly and very much still ahead of the plan, if you think of it as a 20-year plan,” Hughes said. “Every little thing that happens at BullStreet adds to the total. All of it, the vision for the site, becomes clearer and clearer to everyone the more that is built and the more that is developed there.”

This article first appeared in the Oct. 7 print edition of the Columbia Regional Business Report.