A two-story, mixed-use development building is being planned at St. Anns Alley, a single-family neighborhood in West Columbia’s River District. 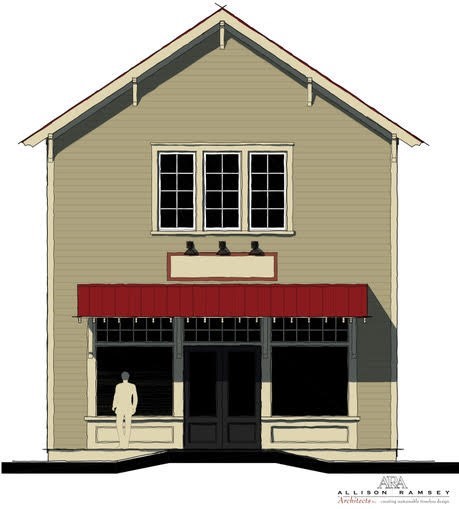 The building at the entrance to the development at the corner of Center Street and St. Anns Alley will include 948 square feet of heated and cooled office/retail space on the first floor as well as a 754-square-foot living space on the second floor. The living space will include one bedroom, a kitchen, a bath and a great room, according to a news release from project developer Spring Street Partners.

Construction on the mixed-use building is slated to start this summer and be completed in approximately six months, according to the release. The lower level commercial space can be upfitted to a purchaser’s specifications if the building is purchased before or during construction.

“The unit is designed to not only project a quality commercial building but also to fit in with the surrounding neighborhood,” developer Joe Taylor said in the release, adding that the building at 509 Center Street “will set a new architectural standard for commercial construction along the Center Street commercial corridor.”

“The commercial component will lend itself well to a variety of neighborhood retail or office uses be they creative, trade or professional businesses,” said Baldwin, who is handling the sale of the live-work unit for Cypress Commercial and Investment Real Estate. “With its location at the entrance to St. Anns Alley, convenience is the driver for this live-work unit, not only for the owner and all the residents of St. Anns Alley but also for the entire growing, vibrant West Columbia River District.”

The building is the only live-work unit planned for the 34-home development.

Last month, project developers announced that 10 of 15 lots in Phase II have been released for sale, with all 11 Phase I homes either under contract or sold and occupied. Five homes currently under construction are expected to be ready for occupancy in July, and four Phase II homes have already been purchased.

Five additional homes will be ready for occupancy later this summer, the developers said.

“St. Anns Alley is a perfect blend of old and new in West Columbia,” West Columbia Mayor Tem Miles said. “We have always believed West Columbia is the best place you can live and work. I am so excited that this project will provide an opportunity for folks to do both in the same setting.”

Allison Ramsey Architects of Beaufort, designer of all the St. Anns Alley homes, is also designing the mixed-use building. Mungo Construction of Irmo is the builder, while Civil Engineering of Columbia is handling the site work.

The community is bounded by Center, Spring, Herman and Augusta streets in the River District. St. Anns Alley homes are two- or three-bedroom with two and half baths, ranging from 1,100 to 1,600 square feet. Two parking spaces are allotted to each house, and the neighborhood includes a park, landscaping and sidewalks.