Venue to bring entertainment and development to North Main 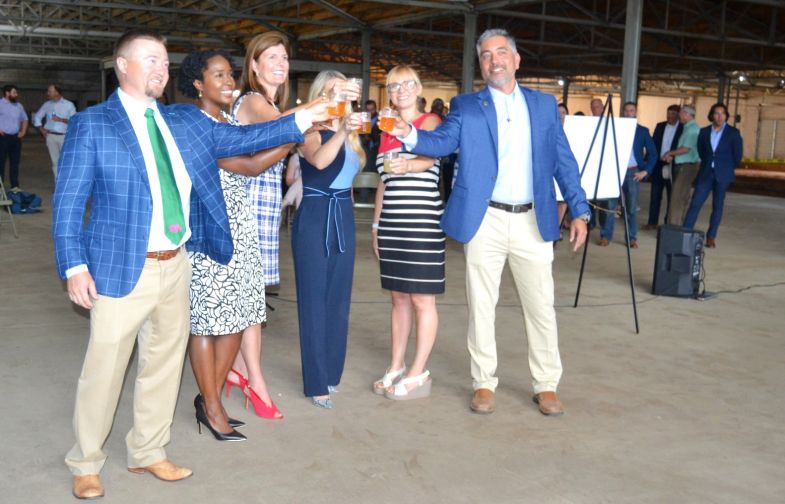 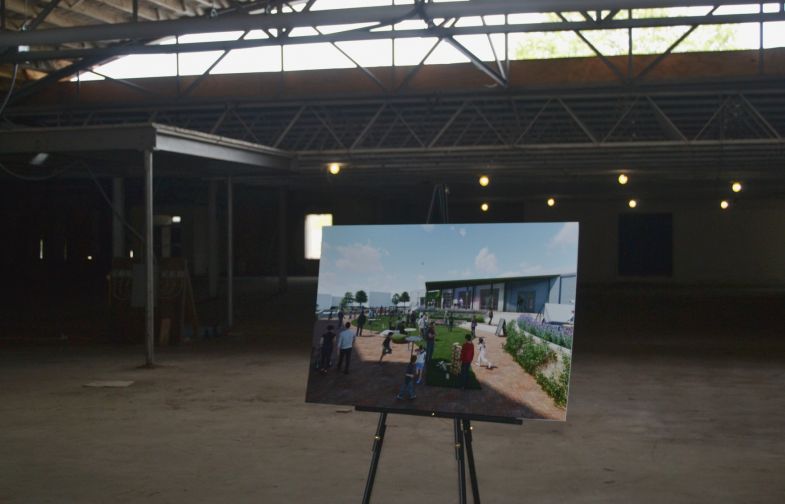 A rendering of Peak Drift Brewing is highlighted in sunlight during Tuesday's reveal of the facility name. (Photo/Melinda Waldrop) 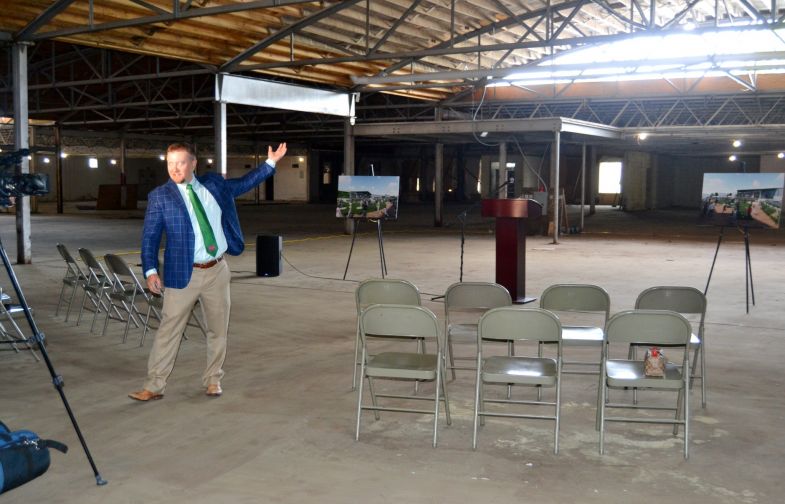 Peak Drift Brewing co-owner Greg Middleton gestures while speaking to the media during Tuesday's unveiling of the name of the 64,000-square-foot facility. (Photo/Melinda Waldrop) 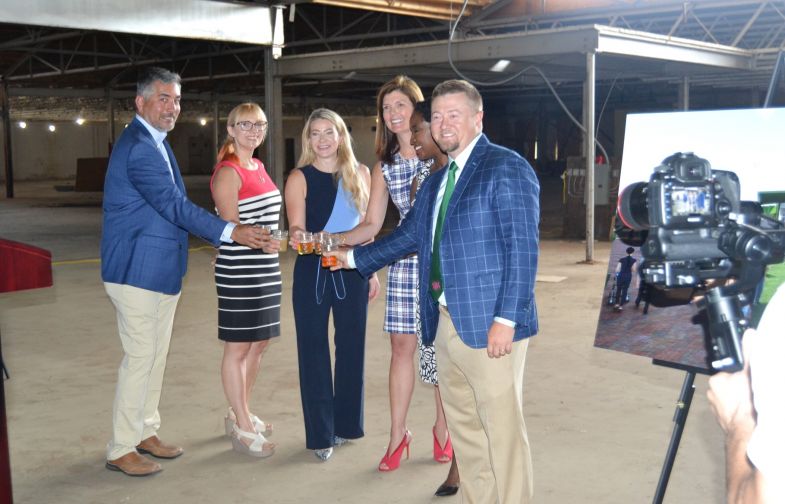 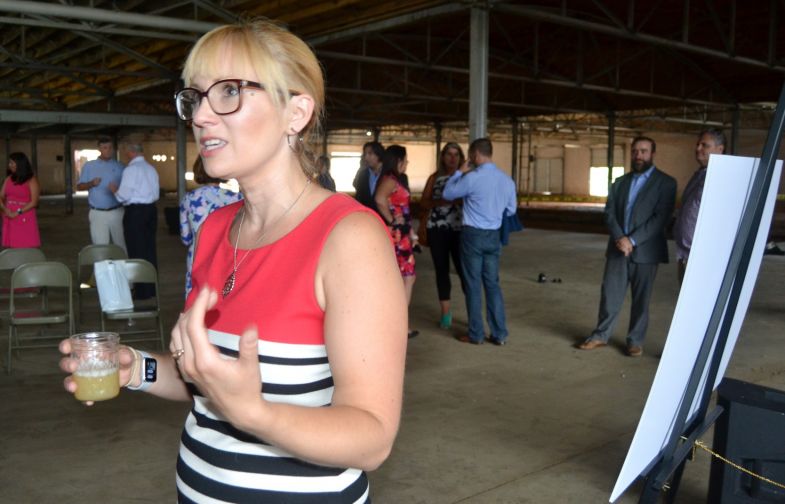 The 64,000-square-foot, $34 million entertainment venue and brewing production facility set to open on North Main Street next year is about more than beer.

Peak Drift Brewing Co., the latest project of the Middleton family, is located in an Opportunity Zone, one of nearly 9,000 areas throughout the country designated for incentivized economic development through 2017 federal legislation sponsored by Sen. Tim Scott. Investors receive tax benefits to invest in low-income communities certified as Opportunity Zones by the U.S. Treasury Department.

“People say why not Charleston? Why not Charlotte? Why not Greenville? Why not Miami?” Greg Middleton, who will own Peak Drift along with sister Sara Middleton, said during today’s official announcement of the brewery’s name and head brewmaster. “You can take the money and the capital you’re doing here and go anywhere. I’m not from Miami, and neither is Sara. I’m from Columbia, I’m from South Carolina, and I want this to be something that Columbia can truly be proud of.”

In March 2018, S.C. Gov. Henry McMaster nominated 135 areas in the state as Opportunity Zones, with 128 eventually certified as low-income community tracts and seven as contiguous to such tracts. So far, the 8,764 certified zones in all 50 states, Washington, D.C., and Puerto Rico have attracted $75 billion in private investment, said Alyssa Richardson, Scott’s deputy chief of staff.

“Generally, when you’re talking about a place for investment or opportunity, you want a place where this is a pretty high median income,” Richardson said during remarks at today’s announcement, also attended by Lt. Gov. Pamela Evette. “You want a place where you can invite clients to come and have a customer base. Here’s the thing about Opportunity Zones: These zones were selected because of the high poverty rates. The average poverty rate in an Opportunity Zone is about double the national poverty rate. That means that places like this brewery are coming into places that can really, really use that development and can really use that growth.”

The space at 3452 N. Main St., site of the former Stone Manufacturing Co., will also include a gymnasium, a basketball and volleyball court, and green space.

Sara Middleton said the facility, which will also feature locally sourced food, dovetails with her family’s health care businesses because it will encourage healthy, outdoor activity.

“We’re going to have so many different activities — a huge lawn area with games,” she said. “We’re just really excited and looking forward to not just seeing people sit around a drink beer but really enjoy themselves in an active way.”

Constructed in 1946-47, the building was acquired in 1948 by Greenville-based Stone Manufacturing, which became a global apparel company. The Columbia facility, made of concrete block and washed brick veneer with a barrel roof, was enlarged three times between 1948 and 1980 and is one of the few examples of a sizeable industrial property in the North Columbia neighborhood of Eau Claire.

The project, announced in 2020, will use federal and state tax credits for adaptive reuse and historic preservation.

“When you’re dealing with an old building, you don’t know what you’re going to run into,” said Brian Johnston, vice president of operations for project contractor Mashburn Construction. “And then being able to transform that from something that may be falling apart or something that may have other issues into a new use that’s going to bring a lot of people in that will be able to appreciate it — it’s probably a little bit more rewarding than just an average ground-up building.”

The Middleton family, including Greg and Sara’s father Scott, is behind several high-profile renovations in Columbia, including Smoked Restaurant and the Main Course in the 1600 block of Main Street. Smoked, a smoked meat and oyster bar set to open later this year in the downtown superblock, will feature a microbrewery that will serve as a liquid test kitchen for larger-scale production at Peak Drift.

About 15,000 square feet of the North Main building will be devoted to beer production, Johnston said. The priority is to get the production facility up and running, he said, with that permitting process currently underway, as is the design and preconstruction process for the remaining space.

“I kind of equate it a very upscale Dave and Buster’s, is the easy way to put it, but with a huge production brewery,” he said.

Ashley Kinart-Short was also introduced as Peak Drift’s head brewmaster. Kinart-Short is the former brewmaster at Capital City Brewery in Madison, Wis., where she grew up loving beer, along with cheese, sausage and other local staples.

“I’m very excited to bring that enthusiasm to Columbia and super-excited to be part of this community,” she said.