The large capital M is omnipresent.

The block letter, which could be considered burgundy but skews closer to garnet in Columbia color palettes, that is Mashburn Construction’s simple but instantly recognizable logo marks a plethora of construction sites in the Midlands and throughout South Carolina. The Columbia-headquartered company, with divisions in Charleston, Greenville and Myrtle Beach, is celebrating its 45th anniversary this year and showing no signs of slowing down. 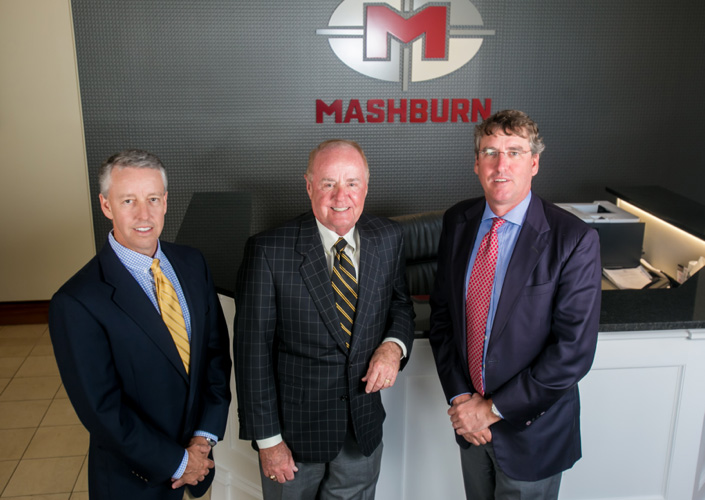 Founded in 1976 by CEO Harry Mashburn, the company underwent a leadership transition in May 2017. Following Harry Mashburn’s retirement, son Paul, 55, took over as CEO after serving as president and COO, and son Lee, 52, became president of the firm where he’d been executive vice president of preconstruction.

“We definitely have different roles, and we feed off each other’s strengths,” Paul Mashburn told the Columbia Regional Business Report.

“If you’ve seen that beer commercial with the two partners where one of them says if you can sell it, I can make it —  I make the beer and he sells the beer.”

There was never any real question that progression would eventually take place, the brothers said.

“When you grow up around something, when you drive around and see job signs and you have an equipment yard and your grandfather worked at the equipment yard … it was just always right there,” Paul said. “We worked summers. It’s just what we did growing up, so unless we wanted to go out and be a lawyer or a doctor or an accountant or something different, then it was just an opportunity that made a lot of sense.”

The firm has been behind some of the most well-known projects throughout the state and in downtown Columbia, where its expertise in historic renovation is on full display. Mashburn has been the contractor on high-profile historic renovations including Hotel Trundle, The Grand, Mast General Store, Nickelodeon Theatre, and the Sheraton Conference Center.

“My passion would be all those historic buildings,” said Lee Mashburn, who traces that love to his father’s longtime involvement with downtown economic development group City Center Partnership, an organization on whose board both men have served.

“Seeing all these buildings — you don’t even know what they look like behind the facades that have been put on them. … It’s great to walk into an old building and see what it used to be and look at pictures from 100 or 80 years ago and say, ‘Well gosh, this is the way this building should be anyway, the way it was originally built.’ We’ll go back and bring it back to the pictures that we see from the 1930s or 40s, and the building functions as it should.”

Mashburn is also the contractor on two of Columbia developer Scott Middleton’s newest projects: Smoked, a restaurant opening soon in the 1600 super block of Main Street, and Peak Drift, a $34 million, 64,000-square-foot brewery and entertainment venue coming to the Cottontown area on North Main. 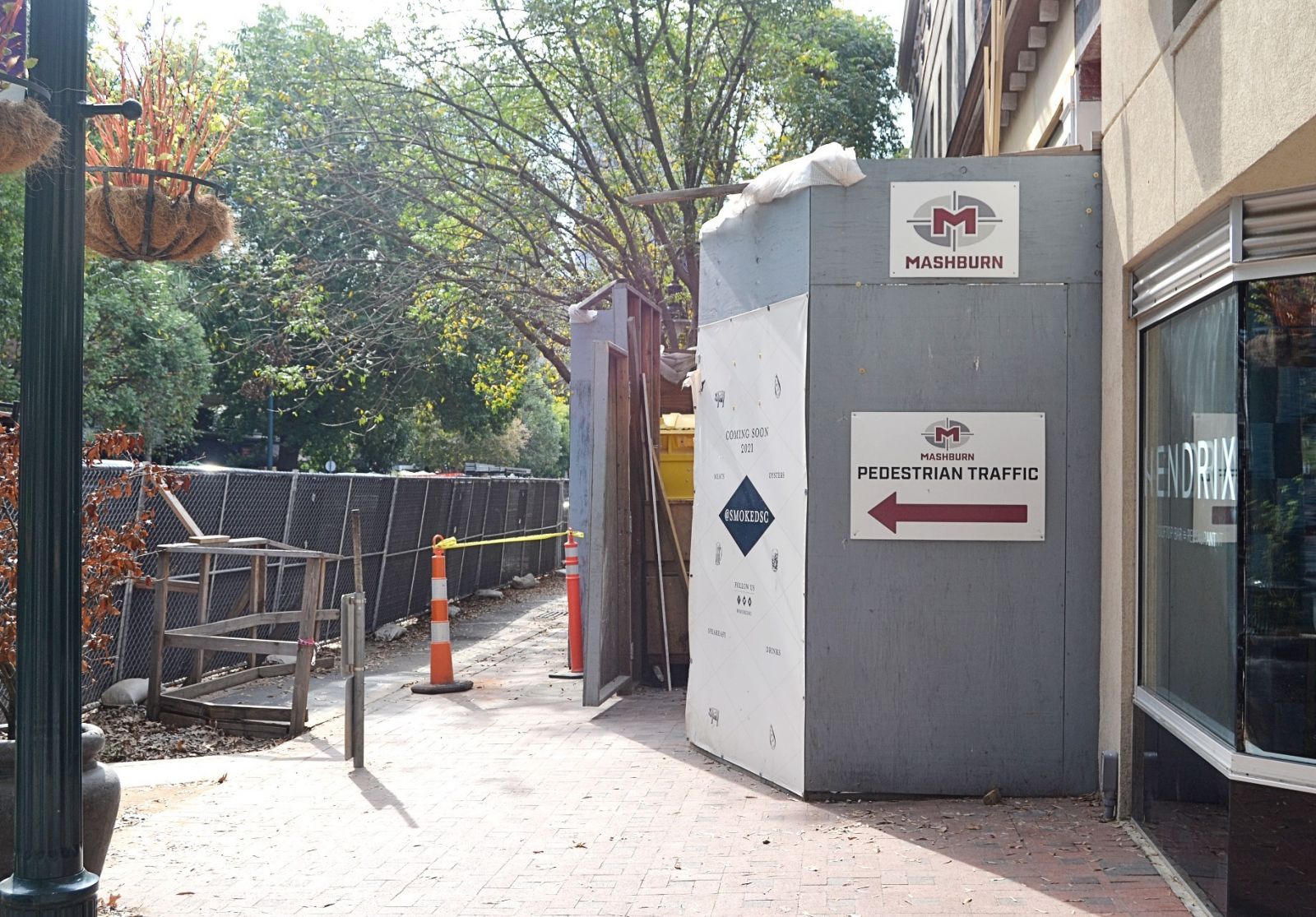 “I think that we’ve probably renovated or built over 60% of Main Street here. That’s been unbelievable, the transformation of what’s happened in downtown Columbia,” Paul Mashburn said. “And it’s really been neat to be a part of that and watch all these old, dilapidated buildings, wig shops, different kinds of things that really wasn’t a bustling downtown, turn into restaurants and bars and bowling alleys and boutique hotels and all that.”

Statewide, Mashburn has also overseen the 90,000-square-foot MUSC College of Health Professions, which included both historic restoration and new construction; its 2,125-square-foot Myrtle Beach office, which renovated a building in the city’s revitalized downtown; the 57,125-square-foot new construction Grand Bohemian Hotel completed in Charleston in 2015; and the historic renovation of 27,310 square feet of office space at the former Elks Lodge at 18 E. North Street in downtown Greenville.

“Restoring something historic, there’s something pretty special about it, instead of just tearing something down and building a brand-new shiny glass building,” Paul Mashburn said. “That’s nice, too, but it’s a little different when you take an old relic, like an old classic car.”

Mashburn’s historic renovation projects have won numerous awards, with Hotel Trundle ranked No. 5 in USA Today’s 2021 list of best historic hotels. But only one concluded with a knighting ceremony.

“One of the first projects we did in Myrtle Beach was Medieval Times, and I was onsite project manager for that,” Paul Mashburn said. One of the first tilt-panel restaurants Mashburn had done when it opened 26 years ago, “it’s a fortress, still standing today,” he said. “To remember being there every single day, and walking around doing a punch list when you’ve got knights in armor walking past you with these giant Andalusian stallion horses, jousting while we’re doing a punch list, was very surreal.”

A sword hanging on the wall in Mashburn’s Columbia office is a memento from an equally memorable honor.

“I got knighted,” Paul said. “It wasn’t by the queen. It was by some hippie guy, but he could joust pretty good.”

While no new honorary titles are on the horizon, plenty of construction is. Paul Mashburn said the company is going into 2022 with one of the healthiest backlogs in its history as the industry’s recovery from the effects of the COVID-19 pandemic continues — with some lingering complications. Though the price of lumber has halted a stratospheric rise that left the company unable to begin wood-frame projects, the brothers said residual supply chain issues are affecting other materials and delivery times.

“It takes 11 months to get a steel joist when it used to take one and a half to two months,” Lee Mashburn said, while Paul said that prices have increased 15% across the board from pre-pandemic levels.

Other delays have come from finding new ways to navigate inspection and permitting processes with many municipal offices still closed.

“Where before you could go in and see somebody that you’ve known for 15 years to walk a permit through, that person is not sitting there anymore,” Paul Mashburn said. “You’re dealing with somebody on the phone or on the computer.”

Hiccups aside, Mashburn is focused on busy future that includes a new multi-use outdoor space called The Hangout planned for Myrtle Beach’s Broadway at the Beach attraction as part of its newly launched hospitality division and a new riverfront location for Larkin’s restaurant in Greenville.

“Now all of a sudden everybody’s chomping at the bit to do something,” Lee Mashburn said.

“They’ve sat on the sidelines for a long time, so a lot of people are doing a lot of things right now.”

Said Paul: “Developers develop. If you’re a developer and you do buildings and you turn them and these private equity firms have this money to put into these projects — it’s got to keep going, and we’re waiting right there to build them.”

Some of that business comes through “osmosis,” Paul said, borne out of longtime connections that go along with that capital M. “That’s one good thing about a family business and us having the name and being a part of the company. People like that.”

Both brothers hope folks who need something built keep calling on the Mashburns for another four decades.

“I think Paul would agree that we’ve got this company in a better place than it’s ever been,” Lee Mashburn said. “We’ve got better people. We’ve really got a great stock of good, young, experienced project managers, superintendents, marketing people.

“From top to bottom, we’re excited about where we are and what the future holds.”

This article first appeared in the Oct. 11 print edition of the Columbia Regional Business Report.