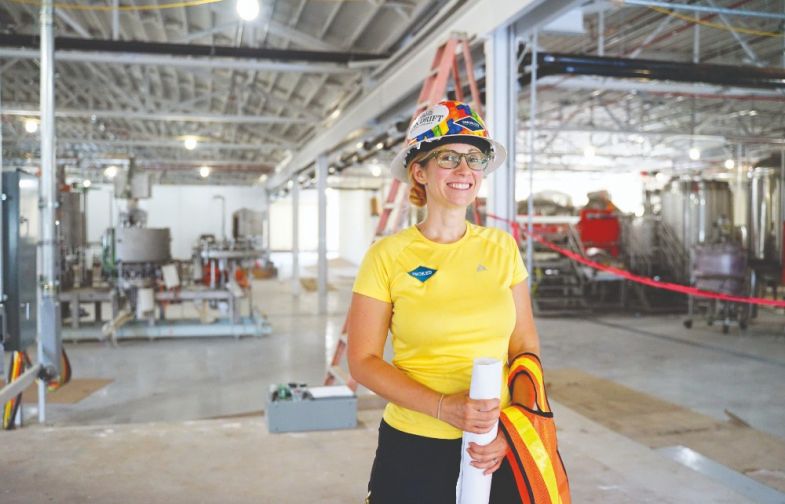 Peak Drift brewmaster Ashley Kinart-Short has a hands-on role in the design of the 64,000-square-foot brewery and entertainment venue. (Photo/Lynn Luc) 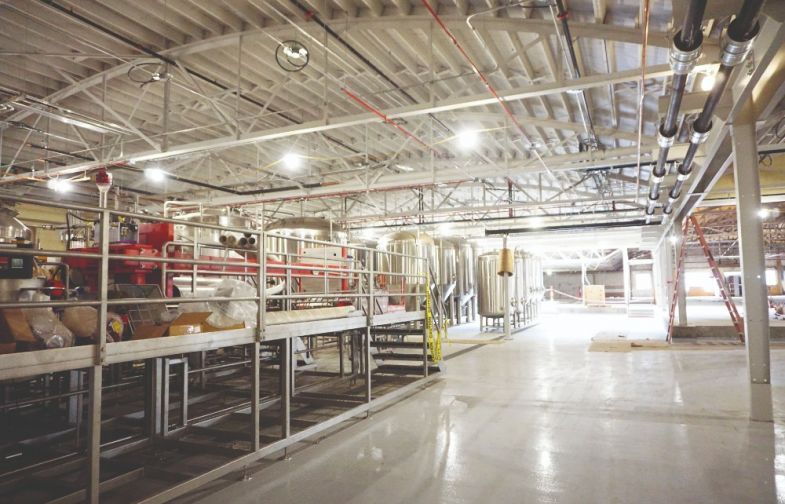 The 64,000-square foot brewery and entertainment venue on North Main Street is on track to open next spring. (Photo/Lynn Luc) 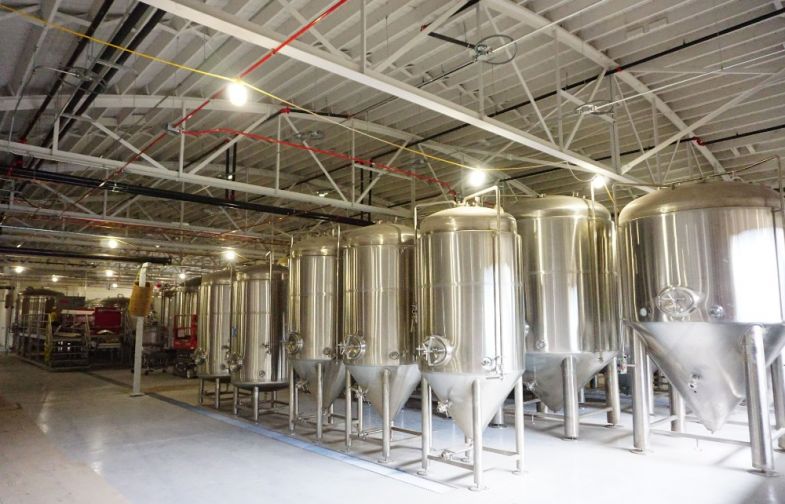 Peak Drift will be able to produce up to 25,000 barrels a year once its equipment, including steel fermentation tanks produced in the U.S. and Europe, is up and running. (Photo/Lynn Luc) 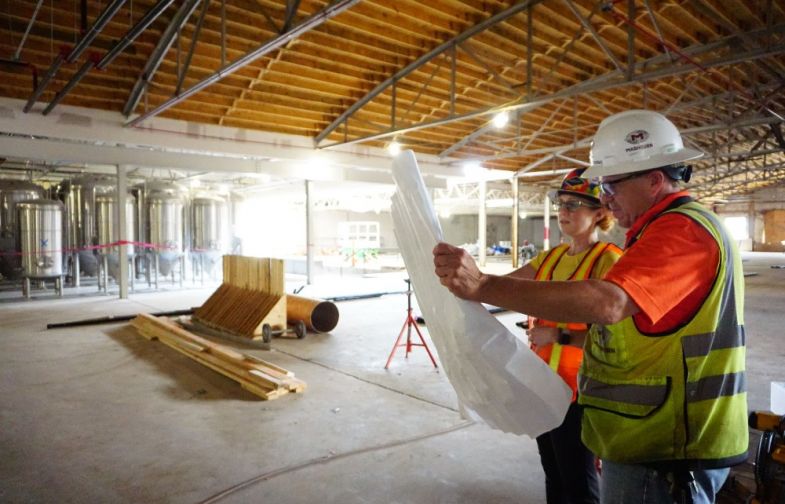 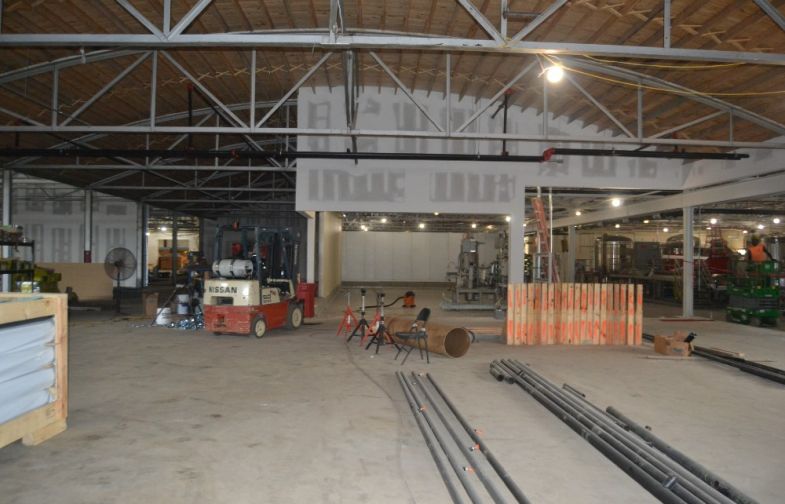 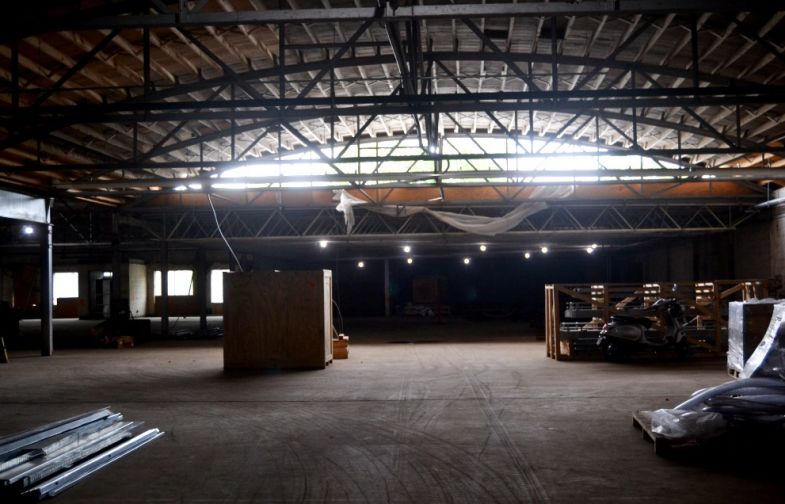 A distinctive feature of Peak Drift is the barrel roof of the former Stone Manufacturing building. (Photo/Melinda Waldrop) 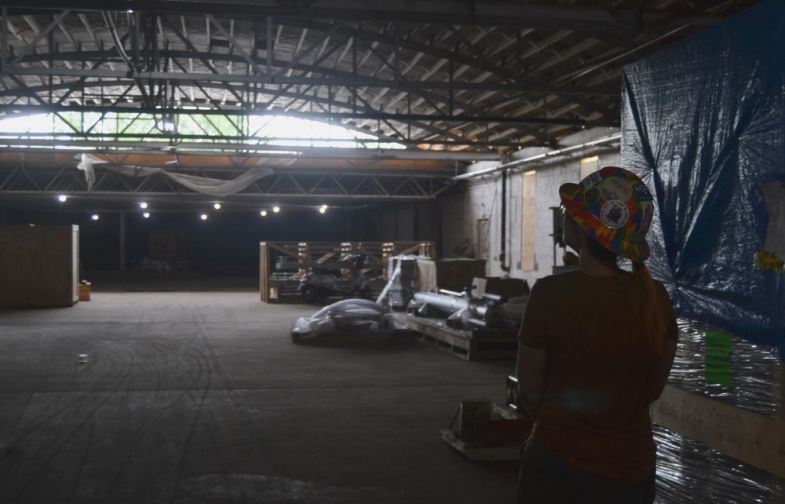 Right now, it might be easy to mistake Ashley Kinart-Short for a contractor, not a brewmaster.

With the opening of the 64,000-square-foot production facility, brewpub and entertainment venue she’ll preside over on North Main Street anticipated next spring, Kinart-Short is most likely to be found these days roaming Peak Drift Brewing Co. in a brightly colored hard hat festooned with brewery logos.

“You can’t manage what you don’t measure,” Kinart-Short, announced last August as Peak Drift’s brewmaster and the second woman to hold that position in the state of South Carolina, said during a recent tour.

While excited to begin producing up to 25,000 barrels a year of IPAs, sours and other styles of beer — in addition to the hard seltzers and ciders Peak Drift also plans to offer — Kinart-Short is currently a hands-on participant in design details still being hammered out. Apart from the sheer scale of the project in the former Stone Manufacturing building, ongoing supply chain challenges and labor shortages have thrown wrenches into Peak Drift’s schedule.

“Number one, you can’t plan to get things when you don’t know which things are going to be those next things that you can’t get in time,” said Brian Johnston, vice president of operations at project contractor Mashburn Construction. “Number two, it’s hard to lock in a price, because by the time you figure out what you can get when, the cost has gone up again. Those things have made everything else a lot more challenging. … Something as simple as the overhead door or the dock levelers had extremely long lead times. Or some oddball things like the epoxy in the paint for the flooring, the resins, we couldn’t get those.”

The building also presented some internal obstacles, namely in the form of its distinctive barrel roof that is key to both the design and the historic tax credits helping to fund it but unable to support the heavy process piping necessary to move liquid throughout the facility. Johnston said steel supports had to be engineered to provide additional support.

The bank of windows that will allow taproom visitors to view the brewery’s huge steel fermentation tanks proved to be another challenge. First, their design had to be approved by the myriad regulators who oversee historic restoration projects, including the State Historic Preservation Office and the National Parks Service. As intricate as that process can be, it may, in this case, have been the easy part.

“The lead time is massive to order glass,” said Jason Snyder, director of sales and operations for Peak Drift Beverages.

Because of that, Johnston said, “We have to take some risks on releasing some of that material, knowing that there may be some penalties or some issues if something comes back and we haven’t done enough of our homework and missed the base on something. But at the same time, we can’t wait for 30 days for SHPO and another 30 days for NPS, because at that point, to put on top of that another 16 to 20 weeks waiting on windows, that brewery will be done and we’ll still have plywood in the windows, which is what you see right now.”

Long lead times and labor shortages have also complicated procuring electrical and mechanical components, Johnston said. However, he said Mashburn’s extensive track record of navigating the labyrinth of historic restoration has served it well in adapting to supply chain snafus.

“If you’ve never done it, you look at it and figure the schedule will be X and it ends up being Y,” he said. “After you’ve done a few of these, you can understand the challenges you’re going to face and figure those things out. Likewise, over the past year, year and half, we’ve become acclimated to learning how to work around supply chain.”

The complications have led to a cost increase that is “significantly more” than Peak Drift’s original estimated $34 million price tag, Snyder said.

The 13,000-square-foot tap room is on track to open in late spring. The facility will include basketball and volleyball courts and green space, and Snyder said the brewery hopes to launch its product lines this October.

A fully functioning canning line is rare for a new brewery, but so are tanks with equipment manufactured stateside as well as in Germany, Austria and Slovenia that will be capable, once running 24 hours a day, of producing up to 240 hectoliters (one hectoliter equals one hundred liters) a day, according to Kinart-Short.

“We have lot of really nice equipment, more than your average startup would have, but at the same time, looking at all this, I think we’re going to make really great use of it,” Kinart-Short said. “The sooner we start maximizing our capacity and really using everything to its potential, there are so many other little pieces we can add to it to start making different products, better products.”

“We have the small-batch brewery and a smaller pilot there to play with the ingredients,” Kinart-Short said. “ … The craft industry is just wild right now. Something new is coming up almost every day. Our initial releases, like our Golden Ale and our New England, have been some of the forefront of what we’ve been thinking about since the beginning. The hazy style is definitely not going away. Those two are still at the forefront of what we’re focusing on as far as volume-wise.”

Once cans are available to consumers, the plan is for them to feature a small yet important difference. Peak Drift is awaiting delivery of a high-velocity commercial digital can printer, the likes of which only one other company in the country owns, Snyder said. The $4 million, 17-ton machine, which required reinforcing of a section of concrete at the back of the brewery, will make Peak Drift’s cans recyclable, unlike those with a sticker or a shrink sleeve.

“Ninety-eight percent of municipal facilities kick them aside,” Snyder said.

While the cost of the machine was daunting, Snyder said brainstorming about its potential uses led to ideas such as printing cans for other breweries or outside-of-the-box customers. “Not if, but when, Dawn Staley wins her next national championship, if they want to print national championship sparkling water, we can turn that around in a matter of days,” he said. “It’s just going to give us some really cool things to do down the road.”

Peak Drift hopes to keep bringing the kind of innovation — including electric car charging stations — that has been synonymous with its inception to an ongoing revitalization of the North Main area. More than just a historic renovation project, Peak Drift is one of nearly 9,000 Opportunity Zones nationwide — areas designated for incentivized economic development through 2017 federal legislation sponsored by Sen. Tim Scott. In remarks officially launching the brewery last summer, S.C. Lt. Gov. Pamela Evette noted that the average poverty rate in an Opportunity Zone is roughly double the national average.

“It’s a massive impact for the community and the area in general,” Snyder said.

The chance to be a part of a project with a vision as large as its square footage makes all the challenges in bringing in to bear worthwhile, Johnston said. And like Kinart-Short, he’s already pictured enjoying more tangible rewards.

“It’s not like this is the first brewery, but there are a lot of components to this and even in its location that will kind of make it stand out in a crowd,” he said. “That’s all part of the vision.

“That’s a big part of why we like to partner with people like that, that share a vision like we do. (And) if you’re building a brewery, you’ve definitely got a little prize at the end. We can sit back and literally enjoy the fruits of our labor.”