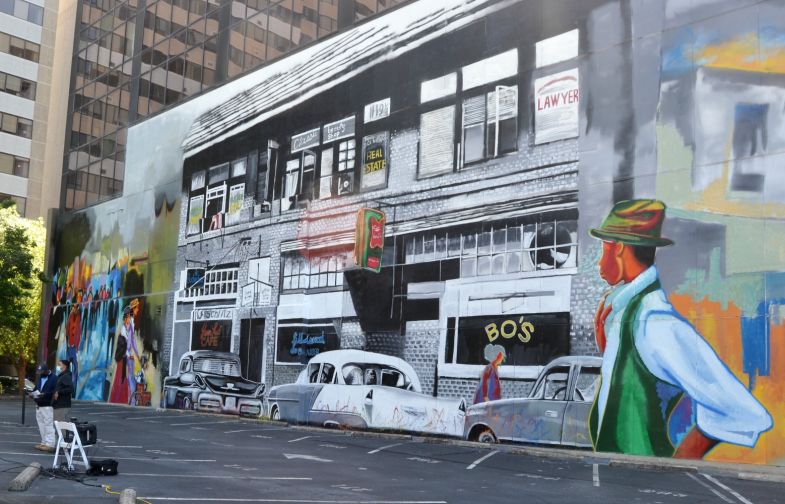 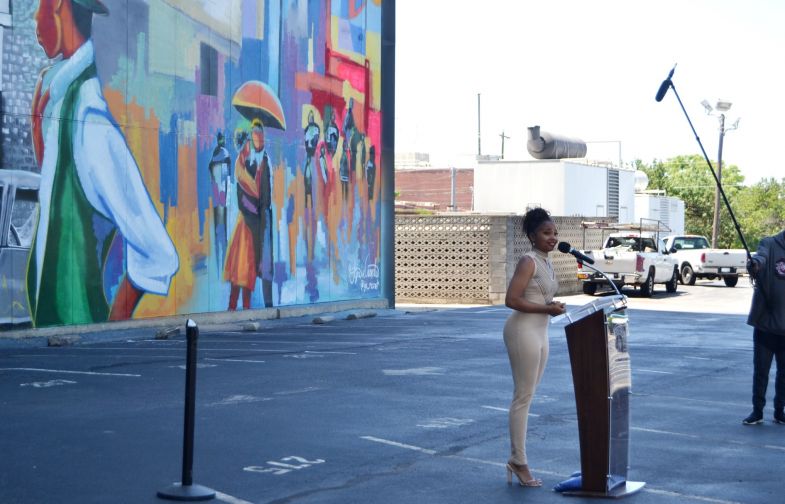 Artist Ija Charles talks about her latest work during a ceremonial ribbon cutting for "The Pursuit of Opportunity: Celebrating African American Business" on Thursday. (Photo/Melinda Waldrop) 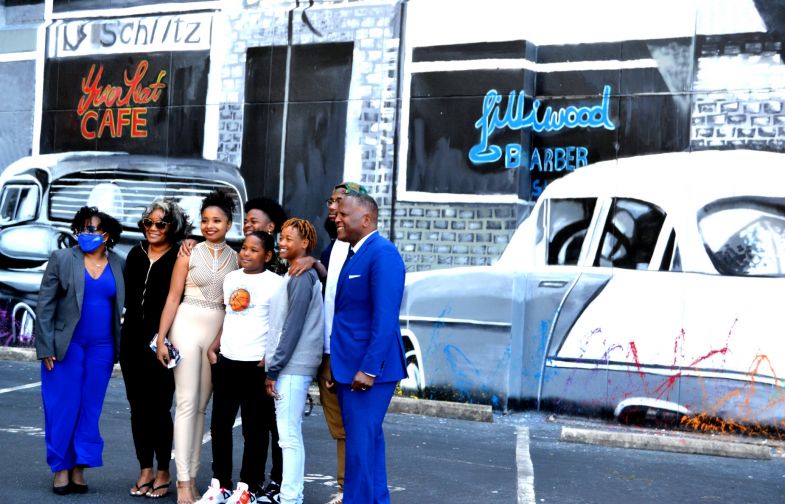 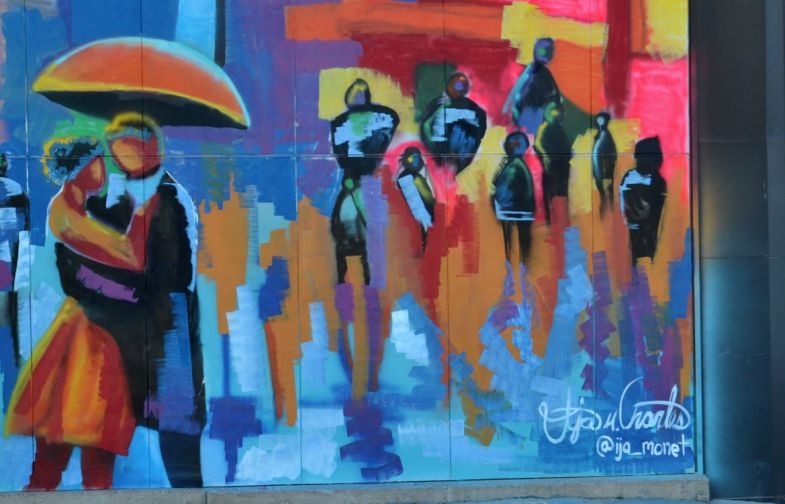 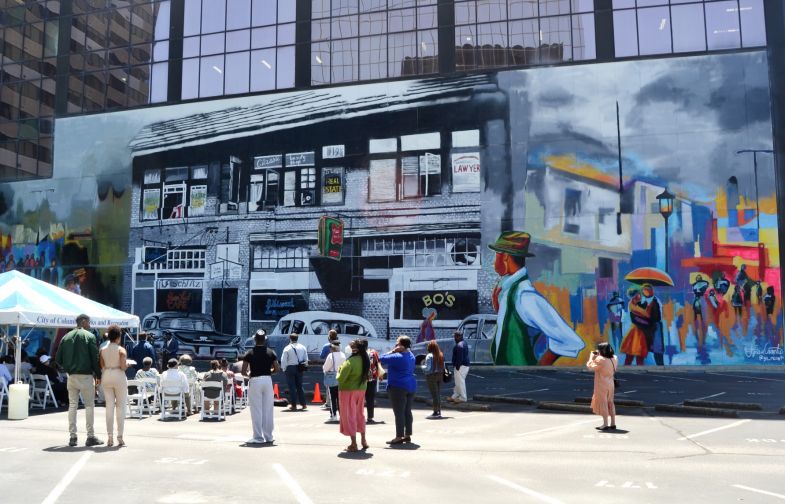 People mill about before remarks during a ceremonial ribbon cutting at a new mural at 1401 Main St. on Thursday. (Photo/Melinda Waldrop)

A young man in a dapper hat turns his head to gaze at an office building as people mill about on either side of him.

The man’s hat, a swirl of green, yellow and orange, accents a bright green vest and echoes vibrantly hued scenes of folks dancing and mingling behind his left elbow. The building that has attracted his attention, however, is black and white, save for signs advertising attorney and real estate services.

At first glance, it could be a scene from any city street, but there are clues the mural unveiled Thursday on the side of a downtown building captures a specific moment in time.

“This is literally uncovering history that used to exist here that was buried over time,” artist Ija Charles said.

“When I got the idea, I said I want to bring the past but also include the present,” said Charles, 24, a Columbia native who completed the expansive work at 1401 Main St. by herself in three and a half weeks. “I kept the Wall Street building in black and white to showcase the fact that this is from the past, this is something that you need to learn about, but kept the residents that existed during that time in color, because we’re all experiencing it again at the same time.

“I wanted it just to breathe life into the city as it used to be here.”

The mural is the latest in a series of public artwork displayed throughout Columbia City Council districts. Hyatt Park, in District 1, is home to “The Pursuit of Citizenship,” while District 3’s Valencia Park showcases “The Pursuit of Education” and Woodland Park in District 4 features civil rights pioneer Sarah Mae Flemming in “The Pursuit of Justice.”

“So often public art, statues, are used as ways to divide people,” Columbia Mayor Steve Benjamin said in remarks before a ceremonial ribbon cutting in front of the mural. “We have been very vocal about these symbols, and how each and every one of these symbols should be opportunities to tell a story, to tell our common story, and pull people together, to unify people. This council unanimously determined that we would tell that story, of the important contributions of African Americans all across the city, and tell it in a way that was edifying and brought all people together.”

Other key Black Wall Street locations in the pre-Civil Rights era included the Simkins gas station, the Masonic Temple, beauty and barbershops, and the Blue Palace and Green Leaf cafes. Only a few structures, including the North Carolina Mutual Building, the Pearson-Champion Funeral Home, and Frederick’s residence, survive.

“In so many ways, this mural helps to chronicle a missing, deleted, and demolished moment in our history,” said Bobby Donaldson, an associate professor of history at the University of South Carolina and director of the school’s Center for Civil Rights History and Research. Donaldson also leads Columbia SC 63, an initiative commemorating Columbia’s civil rights history through efforts such as establishing local historical markers with details of significant area events.

Charles, a self-taught artist and graduate of Westwood High School in Blythewood, has a hand in telling stories throughout the Midlands. Her work is also on display in a mural in downtown Cayce and has been featured at Columbia Metropolitan Airport.

“I’ve been a complete muralist for three years now, doing all the jobs,” said Charles, who will start a project on Gervais Street next week. “I can’t see myself stopping anytime soon.”

Charles’ family, including her grandmother, beamed with pride as the artist posed for pictures in front of her latest work on an afternoon shaded by sun and shadow.

“It’s a beautiful piece of art that tells an even more beautiful story,” Benjamin said. “It tells the story of contributions of African American businesspeople to the long-term vitality of this city and is done by an amazing young artist who I think is representative of the cradle of talent that we have here in this city.”

Charles, whose work can be purchased through her Instagram account @ija_monet, says bringing happiness to people in her hometown is one of the most rewarding parts of her murals.

“It means the world to me, because for me to grow up here in South Carolina, it really was the residents that gave me the power that I have as an artist now,” she said. “Everybody told me, ‘Push on, I love your work.’ Just being able to paint positive vibes on art canvases of South Carolina life, it makes me feel extremely good to be able to bring all these whimsical art works all over town.

“There’s going to be plenty more to come.”