The Air Force has selected Shaw Air Force Base as the preferred location to base a MQ-9 Reaper remotely pilot aircraft unit, including mission control elements.

“Shaw AFB was selected because it was the best option to help us diversify assignment opportunities for personnel within the MQ-9 enterprise, provide increased opportunities for leadership from within the community, and provide flexibility to enhance integration with other organizations and capabilities,” Air Force Secretary Deborah Lee James said in a press release.

The MQ-9 group will consist of about 430 personnel, said U.S. Sen. Lindsey Graham, R-S.C. The first airmen could begin arriving at the beginning of fiscal year 2018 although no aircraft will be based on Shaw, the senator added.

“This announcement is a positive step in the right direction when it comes to Shaw AFB receiving a new MQ-9 Reaper group,” Graham said in a statement. “The men and women at Shaw have proven time and time again that they are ready and capable of answering the call to protect our nation.  I will continue to work with the Air Force and the members of our congressional delegation as the selection process moves forward.” 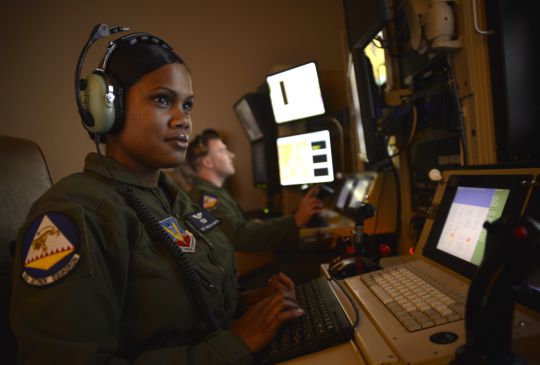 An environmental impact study must be completed before a final decision is made, according to reports.

Teams from Air Combat Command and Whiteman Air Force Base, Mo., conducted a site survey at Shaw in December to assess the base as a candidate for an MQ-9 Reaper mission, according to an article posted by 20th Fighter Wing Public Affairs.

The teams were given a tour of the base with several areas highlighted as possible locations for a future wing or squadron mission.

Because the MQ-9 is a slow-moving aircraft, there were questions raised about its compatibility with F-16s based at Shaw and the safety of having manned and unmanned aircraft sharing airspace, according to the website posting.

Adding the Reaper unit could provide a boost for the local economy.

Currently, Shaw pumps about $900 million annually into region, James Olsen, the 20th Civil Engineer Squadron community planner, told the wing’s public affairs office. “If selected for either the wing or squadron option, our economic impact could push the base to over $1 billion annually,” Olsen said.

Davis-Monthan AFB, Arizona; Moody AFB, Georgia; Mountain Home AFB, Idaho; and Offutt AFB, Nebraska, were named as reasonable alternatives and will be considered as part of the environmental impact analysis process, according to an Air Force press release.