Soldiers join Army for different reasons, but all seek to serve country 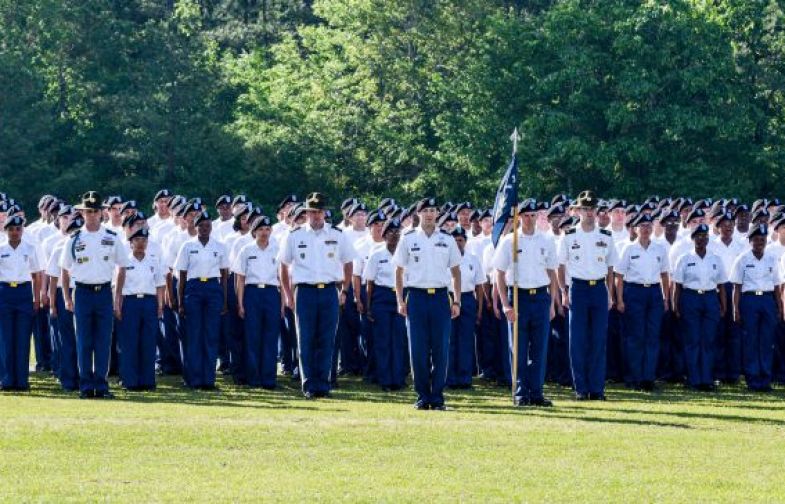 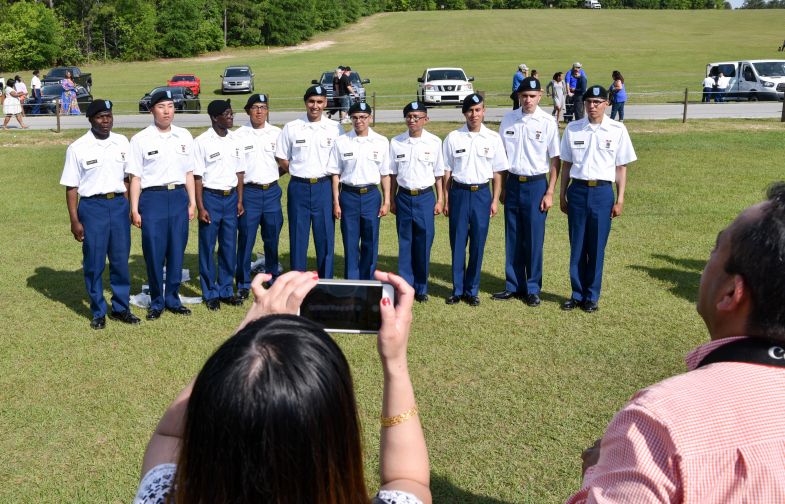 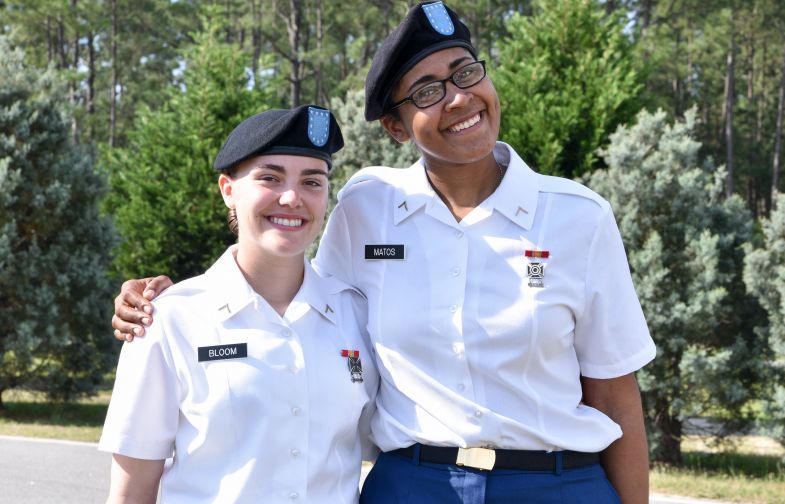 Two soldiers pose for a family pic following graduation from basic combat training at Fort Jackson. About 60% of women who join the Army receive basic training at the Columbia post. (Photo/Chuck Crumb 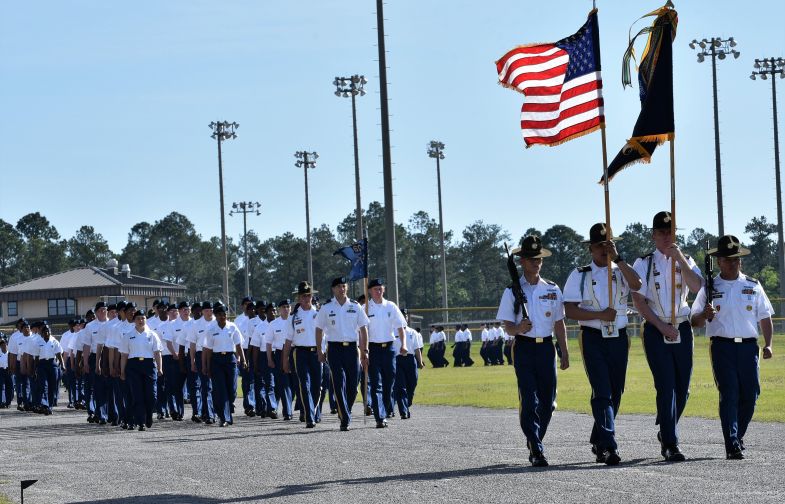 The color guard leads members of the 3rd Battalion, 60th Infantry Regiment in a review before some 5,000 spectators at Hilton Field. (Photo/Chuck Crumbo) 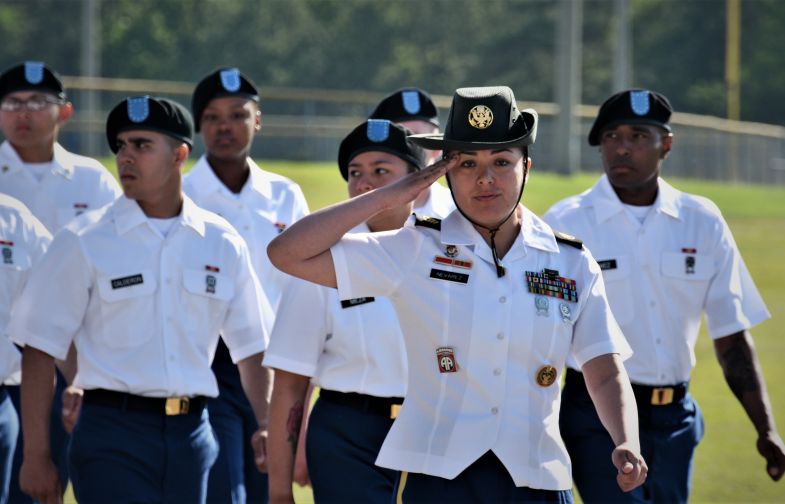 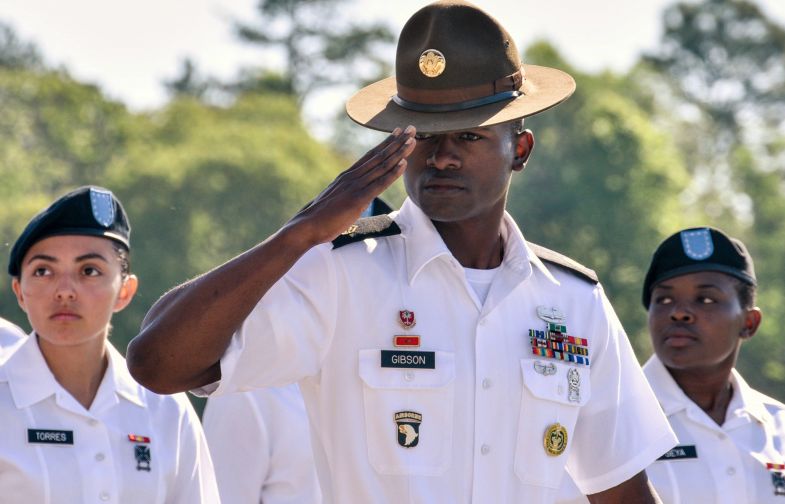 A drill sergeant salutes as his basic training unit passes in review during a recent graduation ceremony at Fort Jackson. (Photo/Chuck Crumbo) 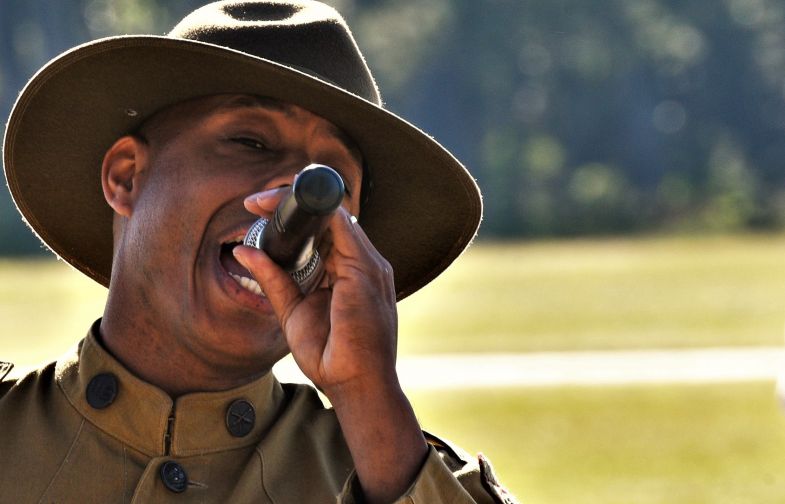 Staff Sgt. Chris Fairley, vocalist for the 282nd Army Band at Fort Jackson, is dressed in the uniform soldiers wore at Fort Jackson when the installation was dedicated in 1917. (Photo/Chuck Crumbo) 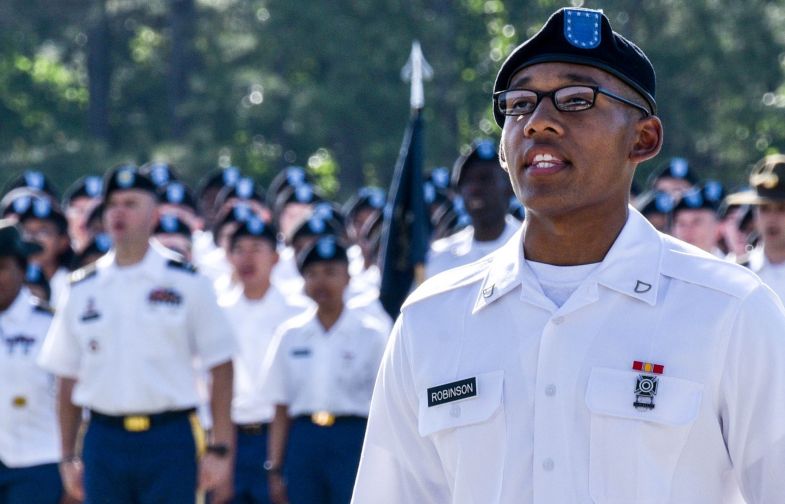 Meantime, a crowd of some 5,000 mothers, fathers, brothers, sisters, husbands, wives, daughters, sons, grandparents, and assorted relatives and friends shouted and cheered, some stomping on the Hilton Field bleachers to add a rumble of thunder to an ear-splitting roar.

The occasion was Basic Combat Training Graduation, which takes place 42 times a year at the Columbia post. The event marks the moment when a recruit completes the transition from civilian to soldier.

“They joined for a variety of reasons,” Lt. Col. Adam Lewis, commander of the 3rd Battalion, 60 Regiment, told the crowd. Some seek adventure while others cite family tradition. And there are others who hope to use the GI Bill to pay for college, Lewis said.

Spc. Jefferson Eagalite, 23, of Miami, said that after earning his bachelor’s degree at Florida International University, he went to work at a bank, starting on the bottom rung as a teller.

“It was kind of dull,” Eagalite said. “I thought I would enjoy it, but I was looking for something more.”

After 10 weeks of basic training, Eagalite said he can’t complain about Army life.

“So far, I really like my job and what the Army entails,” said Eagalite, who signed on to serve as a unit supply specialist in the Quartermaster Corps. “I like the person I’m becoming to be.”

Nineteen-year-old Pfc. Noelia Moreira, of Atlanta, decided to join the Army after spending three years in her high school ROTC program and working her way up to be commander of the unit.

“I really like the military style and the way they lead, so I decided, why not join,” said Moreira, who’s also training to be a unit supply specialist.

As far as basic training and adjusting to reveille at 5:30 on weekday mornings, Moreira said, “I really enjoyed it. I liked the experience and the discipline.”

Pvt. Miranda Bloom, 18, said the initial reason she joined the Army was to use the benefits of her GI bill to help pay for college.

But, she added, “I also joined because of my dad. I wanted to make him proud of me.”

Following training in her job specialty, Bloom plans to return to Spencer, Iowa, and become a member of the Iowa Army National Guard.

That way she’ll be able to find a job, go to college, and still serve her state and country one weekend a month.

To Pvt. Jarvis Boles, 21, of Orlando, joining the Army offers him an opportunity to “do something better with my life.”

For Boles, “something better” includes having a chance to travel. He’s also training for a job as a unit supply specialist.

Despite playing football in high school and college, Boles said basic training wasn’t a cakewalk. “It was easy (physically) at some points, but it can be very mentally challenging,” Boles said.

All the soldiers started their journey in February asking themselves if they had what it takes to be a soldier, Lewis said.

Ten weeks later they proved it by graduating from basic at Fort Jackson.

“Our Army needs you trained and ready,” Lewis told the troops. “Most importantly, take care of your buddy.”