What Lance Brown doesn’t know can, as the CEO and president of Rhino Medical Supply is rapidly learning, end up helping him. 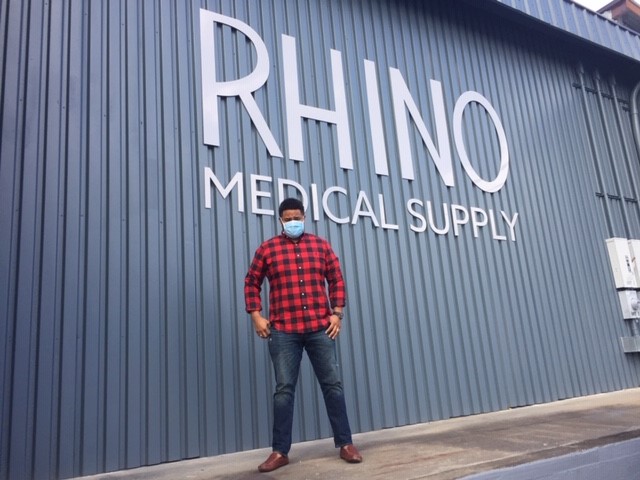 Nine months ago, Brown was not in the medical supplies distribution business. He was running a credit card processing company, Swype Fast, when he became aware of an increasing need for personal protective equipment throughout South Carolina and across the country.

Brown had no experience to speak of in manufacturing and distribution, but he wasn’t dissuaded. In May, he founded Rhino Medical Supply and began coordinating orders for masks and gowns from his garage.

“When we first started, unless you were ordering 25,000 or 100,000 or a million, you really couldn’t help anybody,” he said. “The smaller (hospital) systems and schools, they don’t need a million or even 20,000 of anything. They just need hundreds. One of our missions was to be able to help and cater to the smaller- and mid-sized systems that weren’t getting allocations.

“We determined back in May, in order for us to be here after COVID, we have to position ourselves differently and take on more of a distribution model versus just a sales model.”

COVID-19 created a path to that goal. The soaring need for PPE, including the masks and gowns that Rhino specializes in procuring, made it easier for suppliers and distributors to reach out to one another.

“The barrier to entry was really low,” Brown said. “Before COVID, it would be really impossible, without some serious resources, to get into this industry. COVID provided an opportunity where the barrier to entry was low, and some folks took that to make as much money as they can while they can. That’s not really looking at it from a relationship standpoint but more from a transactional standpoint.

Robinson brought 20 years’ experience in medical sales and deep-rooted relationships with hospital systems and purchasers when he joined Swype Fast about a year ago. Brown drew on that experience when his company began fielding calls for small- to mid-sized businesses desperate to find PPE as the pandemic took firm hold in the U.S.

In its first eight months, Rhino provided PPE to customers in 30 states. In a recent two-week period, the company sold more than 600,000 masks.

“We deal directly with manufacturers,” Brown said. “We really saw the value of purchasing and buying U.S.-made PPE. We knew the quality and the standards are going to be higher, and most importantly, we could control the lead time — two to three days versus two months by ocean.”

Brown, who received his MBA from Duke’s Fuqua School of Business after graduating from the University of South Carolina, had managed merchant services in a four-state area for Wells Fargo before founding Swype Fast. His business background served him well in his new venture, but there was still plenty to learn — and quickly.

“We weren’t learning how to run a business for the first time, (but) we were learning a new industry,” Brown said. “The first time we shipped our first freight, the freight carrier was like, do you have the BOL? I was like, what is a BOL? It’s a bill of lading. Essentially, it’s like a sheet that tells you all the contents that they’re picking up. And I didn’t even know what it meant because I’d never done it before. It’s like getting a master’s degree in two months.”

Brown found, though, that his lack of industry experience could work to his advantage.

“We’re not intimidated by anybody. We’ve had calls with some of the biggest hospital systems in the entire country,” he said. “One of them made the point — ‘You guys aren’t scared, because y’all reached out to my boss. The fact that y’all would even be confident enough to do that, and such a young company, speaks to the company.’ … We think outside the box. We bring all of our backgrounds and some of our decision-making and the way that we go after business. It’s been working for us.”

Part of Brown’s learning curve involved identifying what areas his company needed to shore up. That’s where Haney, Rhino COO and Brown’s friend and fraternity brother at South Carolina, came in.

Haney brought a manufacturing background chock-full of the logistical nuts-and-bolts details needed to run a distribution businesses and jumped at the chance to help build Rhino from the ground up.

“This allowed me to utilize a lot more of my skill set.”

“There are a lot of companies that have supplier diversity goals,” Haney said. “It’s not a matter of the companies wanting to find diverse talent. It’s where do they go to find that diverse talent. … I knew that if we had that certification, they connect with corporate partners, and you have access to those corporate partners. It opens a door, and then you’re able to talk to them about your capability.

“It helps create contacts. I knew that those corporate partners were going to need PPE. This was a way to connect the dots.”

Haney also puts his bottom-line experience to use in another, unofficial role Brown has bestowed upon him: Chief No Officer.

From his desk in the office the men share, Haney cast a disapproving look in Brown’s direction.

“Forklifts also lead to product damage. We’re not going to be able to get that money back,” Haney said. “That could bankrupt us.”

The two men melded their business approaches to identify and fill needs, especially in underserved communities. Through Rhino’s PPE for Good initiative, the company donated more than 80,000 masks nationwide in 2020, with 70% of the distribution in S.C., Brown said. That included 5,000 children’s masks given to Richland County School District One last August.

In January, Rhino shipped 100,000 masks to the I Promise School founded in Akron, Ohio by NBA superstar LeBron James. “There’s a lot of opportunity in this arena, and I think it’s equally important as we grow that we continue to give back,” Brown said.

Seated in front of his computer, Brown pulled up an email from a woman in search of N95-quality masks for her husband, suffering from Stage 4 cancer.

“A lot of the customers we serve, they have no way of getting the small quantities of the protective gear they want,” Brown said. “It’s that kind of stuff. It humbles you and keeps us focused on why we got into it.”

Those rewards keep Brown and Haney working 12- to 15-hour days.

“I’ve been working since 4 a.m. this morning. We’ve leaving at 7, 8 p.m. and then spending some time with the family, and then having to go work again when they go to sleep,” Haney said. “With any startup business, you don’t have the same structure and resources set up in place yet. Me and Lance, we’re doing most of the operational piece. You don’t have time to do everything that you need to get done in a day. It’s a lot of hours. It’s a lot of work.

“The rewarding part is that we’re building a business. When I was kid or young adult, I’d say, ‘I really want to own a business one day, but I don’t know what that really looks like.’ … We’re building the plane as we were going.”

As possible company names were kicked around, Vartanian suggested Rhino, pointing to rhinoceros’ thick hides as an apt analogy for PPE.

“We spend a lot of hours here,” Brown said. “That’s part of it, just creating a culture that we want to build for our own organization. We get to decide what that is.”

Haney, a father of two including an infant daughter, is not immune to the anxiety involved in establishing a startup, but he also draws inspiration from his sister, who owns a veterinary hospital, and his parents, owners of a pet boarding and grooming salon.

“Our business has purpose,” he said. “Anything that I do, I want it to have purpose. We’re really helping people. We’re building a business of purpose.”

Haney and Brown hope that purpose, and the connections created while fulfilling it, will keep Rhino going strong long after the pandemic has subsided.

“Just like everybody else, we wish COVID would end tomorrow, but what it’s allowing us to do is to build a model to where we’re earning relationships,” Brown said. “Each week, we’re gaining three to four new customers all across the country.

“After COVID, they’re still going to need PPE. Maybe not to this level, this extent, but we want to a reliable distributor or supplier for them, even when they have a choice to go back to what they knew, because we were one of the ones that was able to take care of them when they really needed it.”

This article first appeared in the Jan. 18 print edition of the Columbia Regional Business Report.