Bannister, nursing department chair at Midlands Technical College, answered the phone to find a former student on the line and in a panic.

“Her plight was, ‘I have no mask,’ ” Bannister said. “ ‘I’m in the trenches, and I have no mask.’ We got together and found some things to give to her to help her through that weekend. But I’ve heard from one or two students about how difficult it really is.”

Bannister is one of several area education professionals working to prepare soon-to-be nurses and health care workers in related fields amid the uncertainty of COVID-19.

As National Nurses Day, observed May 6, kicks off National Nurses Week, the numbers are sobering. As of May 4, 67,456 people in the U.S. had died of COVID-19, with the country reporting 1,152,372 cases, according to figures from the Centers for Disease Control and Prevention.

South Carolina had 6,757 confirmed COVID-19 cases and 283 deaths as of May 4, according to the S.C. Department of Health and Environmental Control, and 93 new cases, along with 13 deaths, were announced May 5. Richland County has been particularly hard-hit, with 977 confirmed and 6,007 estimated cases as of May 4. Those are the highest numbers in the state, which has a total of 41,507 suspected cases.

DHEC estimates the number of confirmed cases in S.C. to grow to 9,652 by May 23, a projection of almost 1,000 new cases a week. A free mobile testing clinic held May 5 in Darlington County screened 464 people, the agency said. 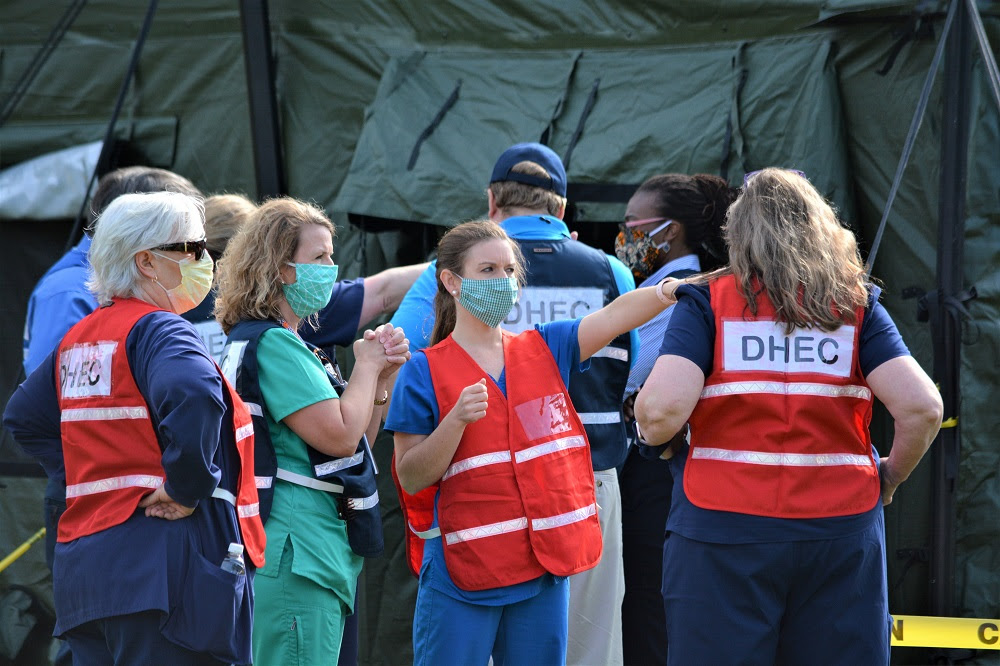 Adrian Stauffer, director of nursing at ECPI University in Columbia and a nurse for 15 years, has wrestled with her eight-year role as an educator while former students, including her daughter, battle the pandemic closer to the front lines.

“They’re faced with a lot of the realities that we’re seeing in the media,” Stauffer said. “For us (educators), it’s kind of like, do we go out into the field? Are we most useful being out there? But we have to remind ourselves that we have to be here for the students, because we’re being much more effective as instructors and helping prepare those students so that they can get out in the field.”

Stauffer, whose daughter works in a correctional facility in Arizona, and other health care educators had to shift their instructional model as the coronavirus closed campuses throughout the state. Experience usually obtained through hands-on hospital work morphed into clickable classes in online and virtual coursework as national standards adjusted to allow a higher percentage of clinical simulation.

“We had to move all online for classroom experiences, and we had to resort to virtual simulations to enhance the clinical learning that we would ordinarily have,” said Jeannette Andrews, dean of the University of South Carolina’s College of Nursing. “The state board of nursing allows us to utilize simulation to replace up to 50% of clinical learning if we need to. Because it (the pandemic) happened in the second half of the semester, we had enough clinical hours of experiential learning to really feel comfortable.

“We feel our graduates are ready. We’re just sharpening the tool now to ensure their readiness for practice, and we will graduate them on time.”

The College of Nursing averages around 120 graduates in May and 100 to 120 in December, along with 200 to 300 who’ve returned to become nurse practitioners or nurse administrators or to obtain a doctorate, each year, Andrews said. She said it’s crucial to graduate this year’s cohort, as well as keep classes behind those graduates on track, to avoid a worsening shortage.

South Carolina is one of four states in the country facing a nursing shortage expected to exceed 10,000 positions by 2030, according to the U.S. Health Resources and Services Administration. RegisteredNursing.org projected a shortage of 10,400 nurses in S.C. by 2030 as part of a need for registered nurses expected to grow by 12% from 2018 to 2028.

S.C. has more than 81,000 nurses, according to DHEC, which employees approximately 459 public health nurses at its health clinics.

“If we have delays in progressing students, or if during this time, some nurses who are on the front lines decide to exit the workforce … we don’t quite know what that’s going to look like, but we already know that there’s a shortage, and we’re trying to make sure that we can continue to produce an adequate supply to meet our patient demands in South Carolina in the future,” Andrews said.

So far, however, Andrews and other S.C. health care educators say that the pandemic is helping to drive growing enrollment numbers.

“We actually have a peak interest in nursing for really the first time in my history,” said Andrews, dean of USC’s nursing college since 2013. “Nurses have gotten such recognition and affirmation for their role, which often we’re invisible in the health system, or (people) don’t have quite the understanding of our role. This crisis has been very beneficial to show the world, really, how vital nurses are on the front line of giving care, during COVID and without COVID.

“It really has highlighted to society the importance of nurses and the role of nurses, and I can tell you in talking with our students who’ve not entered the clinical arena — lower-division freshmen and sophomore students — they’re ready to go. They’ve heeded the call to nursing, and they want to be there. They want to be on the front lines.”

Stauffer has seen a similar mindset at ECPI.

“All of my nurses had multiple offers before they were done. What’s been fantastic about it all is that they have been so raring to go,” she said. “You would think that they would have that fear, like, ‘Oh, I don’t know, I want to be a little hesitant,’ but they really haven’t. They have taken the call and are progressing forward because they want to get out in the field and be useful.”

One of those ECPI graduates is Taniquia Langley, who’s worked at Columbia’s Prisma Health Heart Hospital for three and a half years. With heart surgeries at a standstill as the coronavirus canceled most elective procedures, she has floated among other units, including the children’s hospital. She has seen doctors entering patients’ rooms less frequently and has noticed an increase in visible protective equipment, including N95 masks, when passing the ICU.

“There’s definitely anxiety, but at the same time, we are nurses,” Langley said. “We signed up to work in the hospital. So it’s kind of like you expect the unexpected. You really never know what you’re going to walk into when you go to work anyway. … I always go in with a smile and do the best that I can do and try to make everyone else’s day easier.”

“We have an intake process in which we have an information session for the incoming students as well as an interview,” Jackson said. “Several of the students who were interviewing stated that the COVID crisis put more interest into the field for them, more excitement about being a participant and being able to help out.”

Like nurses, respiratory therapists are vital during a pandemic, especially an airborne one such as COVID-19. Professionals such as the ones Jackson helps train assist with aerosolized treatments and help manage patients on ventilators.

“We’re right at the tip of the sphere with nurses and physicians in caring for these particular patients,” Jackson said.

The technicians Millie Massey oversees as MTC’s radiologic technology program director are also front and center in the coronavirus fight, providing X-rays as well as CAT scans which help pinpoint the pneumonia that signals COVID-19.

The pandemic has hit home for Massey in a way she hopes to be able to share with students.

“Many of our graduates work at area hospitals, so one thing I do want to do is bring in a graduate that has worked during the event, and I want to bring in a specific graduate who tested positive for COVID and have her talk,” Massey said. “I think that it will really nurture that (sense of) ‘Here’s what you can do and the difference you can make.’ ”

Health care instructors, while proud of the accomplishments of their students, can’t help but worry about the world they’re entering.

“It’s OK to speak up, and you have to speak up. I pray that they make sure that their voice is heard and that we have taught them well enough to be an advocate for themselves.”

Bannister has also spoken with a nurse who has moved away from her family, including two small children, to live communally with other nurses during the pandemic in an effort to minimize the spread of the virus. Bannister is impressed by that sacrifice, as well as by stories of nurses providing contact between patients and their families through smart tablets or phones.

“We’ve had nursing graduates who recently called us back and said. ‘We went to New York to help there,’ ” Bannister said. “That was really exciting, to know that we had Midlands Tech students, or Midlands Tech nurses now, who actually volunteered to help with COVID in New York City.”

Stauffer’s daughter recently applied for an eight-week job in New York City “because she just feels that there’s a higher demand there,” Stauffer said. “ … If you’re in the health care field, no matter what position, what role, you have, you have the possibility of being exposed. But think of the experience that they’re also getting. This something that they’re going to share with their grandchildren, to say, ‘Oh my gosh, this pandemic was going on, and I flew across the United States to help other hospitals.’ That is priceless experience.”

Andrews is hopeful that, with more time to prepare than other states, South Carolina won’t see effects such as in New York, where COVID-19 had killed 24,560 people as of May 4, according to CDC data. As of May 3, 6,389 hospital beds in the state were being utilized, a usage rate of 56%, according to DHEC. Of those, 310 were occupied by patients who had tested positive for or were suspected of having COVID-19.

Still, Andrews shares her colleagues’ concern about the changing landscape newly minted health care graduates and those coming behind them will face.

“Today’s nursing students are the front line nurses of tomorrow,” Andrews said. “We have colleagues, and we have children and siblings and friends on the front line. It’s been a little bit of a moral distress, really, to know that we have people on the front lines and we’re not. But we’re advocating, we’re supporting, we are certainly preparing the next workforce to enter during this time.”

While graduations may be proceeding on schedule, the COVID-19 crisis has delayed the pinning ceremonies many nursing students have long looked forward to. During those events, graduates are presented with nursing pins, frequently by a family member or loved one, and often recite the Nightingale Pledge.

Bannister said MTC graduating nurses will participate in a Zoom pledge on Florence Nightingale’s birthday, which caps National Nurses Week on May 12. ECPI may schedule a virtual pinning, Stauffer said, while USC plans a pinning ceremony in August.

“Our faculty and staff have just been an incredible team during this process, and really have come together as I knew we all would to make sure we’re maintaining the health and well-being of our students, that we are providing them a really quality education, and we’re having to be very, very flexible and innovative,” Andrews said. “Whether you’re a nurse educator, you’re a nurse on the front line, you’re a nurse administrator, you’re a school nurse — no matter what type of role we’re in, I’m just so enthusiastic about the spirit of nursing and the contributions of nursing that we make to society, and I’m really proud to be a nurse.”