Bob McNair sees new opportunity for the U.S. economy emerging with the election of Donald Trump as president.

McNair, the founder and CEO of the NFL’s Houston Texans, was in Columbia on Thursday to announce the establishment of the $8 million McNair Institute for Entrepreneurism and Free Enterprise at the University of South Carolina’s Darla Moore School of Business. 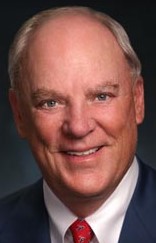 The institute will combine academia and free-market philosophy to help train students to compete and create in an evolving economy that McNair thinks will soon shake loose some of the hindrances he says have been barriers to economic growth and opportunity in America.

McNair began in the trucking business and then created one of the nation’s largest non-utility generators of electrical and thermal energy. He sold it and now is an investor, philanthropist and NFL team owner.

McNair also is a major political donor whose contributions to Senate Majority Leader Mitch McConnell’s super PACs in the past two years have totaled $2.5 million, according to the Louisville Courier-Journal in Kentucky.

In an interview Thursday before the formal announcement about the institute, McNair said he sees the presumed repeal of the Affordable Care Act as a boon for business.

“It’s what’s going to replace it now that matters,” McNair said. “You’re looking at employees who have to provide insurance that costs them $1,500 to $2,000 a month for an entry-level person making $25,000 a year. We can find something better than that.”

He also expects a Republican White House and Congress to address what he said are the other two major obstacles faced by small businesses: taxes and “unruly, burdensome regulations.” Cutting taxes and reining in regulators will help balance an equation that McNair said rests at the heart of any business deal.

“It’s all about risk and return,” he said. “That’s what all investments boil down to.” Cutting taxes, regulations and health care costs would spur the creation of new companies and push existing companies to expand and hire, McNair said.

The Texas businessman dismissed the argument that eight years under President Barack Obama had seen unemployment fall during a long recovery from the Great Recession. “You have to remember that we started at such a low level because of the recession,” McNair said. “Labor statistics also don’t include those who have just quit looking for jobs. That was 400,000 people just last month alone.”

McNair said the Obama years were marked by what he said was an anti-business attitude that emanated from the president himself. “He was clearly out to control and punish businesses,” McNair said. “That’s not how you promote business and see it grow. It doesn’t work that way.”

McNair also anticipates reform of the Dodd-Frank Act that targeted the banking industry and approval of the Keystone XL pipeline as part of a new energy policy that encourages production and energy independence. McNair ]said he does not advocate complete de-regulation or a policy of disregard for public safety, but instead a balance.

“When you get in a situation where there’s more harm than benefit, you need to regulate that,” he said. “You just can’t let a market go without discipline.”

The problem, McNair said, is when it goes too far. He pointed to the regulatory burden now imposed on community banks, for instance, that didn’t slice, dice and package the housing-backed derivatives that helped spur the housing market collapse.

“Those community banks, even the regional banks, that had nothing to do with this can’t afford the millions of dollars needed to keep up with the regulations that followed,” McNair said. “They never created the risk. But they’re being punished. There has to be a balance.”

He also called for the same balance in the energy industry. “Right now we have tremendous subsidies going to solar, wind, electric cars. It’s distorting the marketplace. I think the market can come up with the needed discipline without that,” said McNair, who made much of his fortune in the energy co-generation business. “If it doesn’t work, you don’t succeed.”