Five Points business and neighborhood leaders are calling on the city of Columbia to implement a 10-point plan that they believe will revitalize the downtown enclave.

The plan calls for streamlining the permitting process for new businesses, fast-tracking permits based on their value, as well as for waiving water and sewer expansion fees when applicable. City parking lots would also be upgraded in appearance, including replacing meters with a central payment kiosk, and parking access would be increased while on-site parking requirements would be waived.

City Councilman Daniel Rickenmann, who represents District IV and once owned Five Points-area businesses including the Birds on a Wire and Yo Burrito restaurants, said the plan’s goal is to make it easier for new businesses to open in Five Points, thereby transforming the area known for late-night bars into a destination bustling with activity 18 hours a day.

“There are a lot of opportunities here, and we have to make sure we open that up,” said Rickenmann, who works as a business consultant. “We need to fill the spaces that we have and grow within our community.” 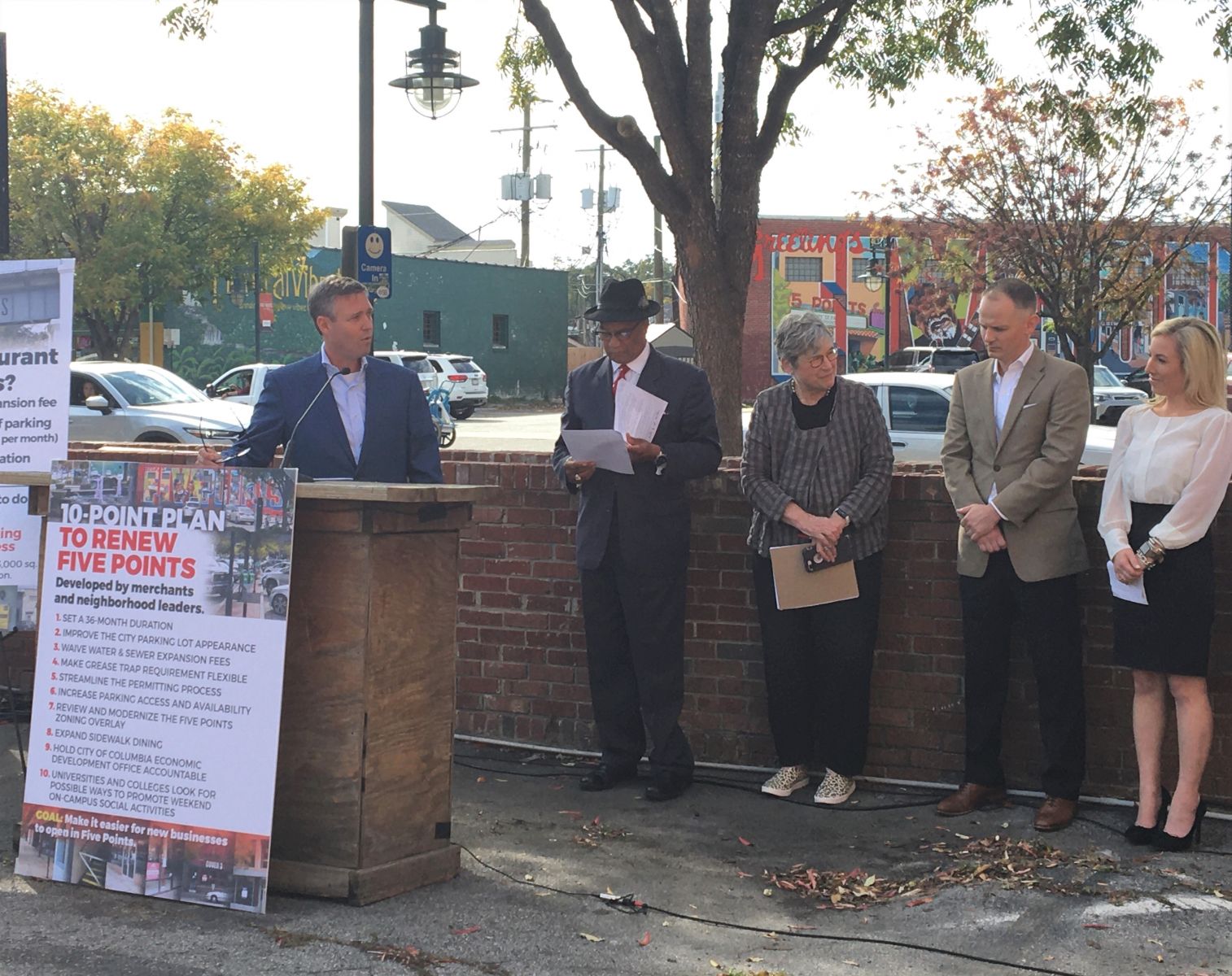 A collaboration of merchants and neighborhood associations developed the plan, presented in a rutted parking lot between two shuttered bars on Harden Street as car horns honked and pedestrians ambled by.

“Closed doors, dirty sidewalks – these things flat-out don’t make a good impression when you bring retailers to town,” said Rox Pollard, retail services manager for Colliers International South Carolina, which is marketing several vacant properties in the area. “We bring retailers in here all the time, but they notice when you drive down Harden Street that something doesn’t feel quite right.”

Would-be retail investors also face higher tax rates because of Columbia’s makeup, which includes several tax-exempt colleges and universities as well as government and hospital agencies. While Rickenmann called the city’s tax base “a hurdle that we can’t get over,” he said other issues can be addressed.

That includes waiving fees that organizers of Thursday’s news conference said can total nearly $128,000 to open a new business in Five Points. That number, based on permitting costs to redevelop a 3,000-square-foot space into a food service operation, includes $75,000 to install a city-standard grease trap.

“The city doesn’t need to act as a barrier, but function as a partner,” said Steve Cook, president of the Five Points Association and owner of fine dining restaurant Saluda’s. “When I see empty storefronts, I don’t see a coming apocalypse. I see tremendous opportunity.”

The plan also calls on the city’s universities and colleges to encourage on-campus social activities, particularly in Greek villages, to curb the flow of students, some of them underage, into Five Points’ bars.

“The university hosts hundreds of on-campus events for students each year, including on weekends,” Jeff Stensland, University of South Carolina public relations director, said via email. “We’re always interested in exploring how programming can be enhanced to appeal to our diverse student population and look forward to future discussions with community members about current and potential offerings.”

Area leaders also want the city to review and modernize the Five Points zoning overlay, establishing a committee to make sure that regulations such as those relating to height and density are relevant. The plan also urges the city’s Office of Economic Development to create and implement a strategy to recruit new businesses to Five Points. 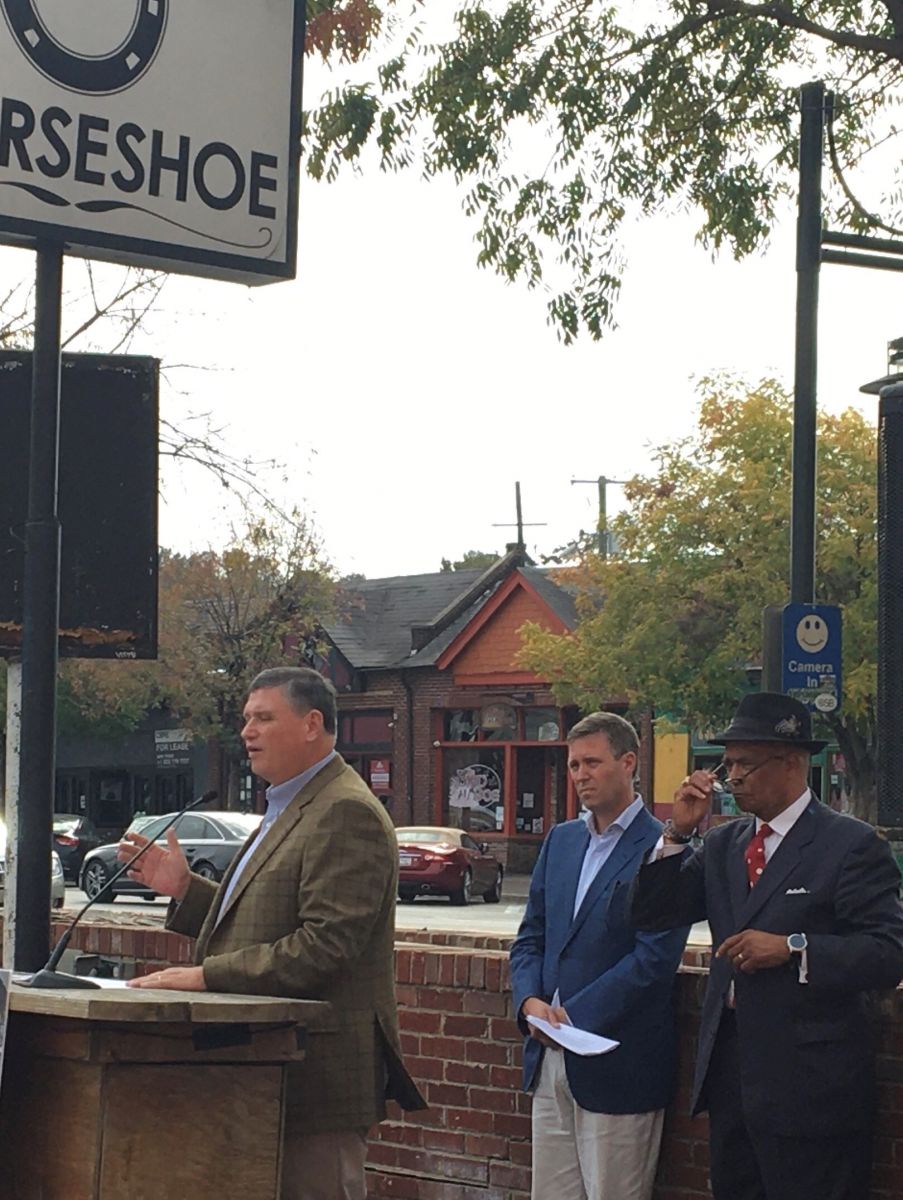 “The key is not more incentives,” Taylor said. “It’s removing the disincentives.”

Taylor pointed to the mixed-used Brookland development, site of newly opened French-inspired restaurant Black Rooster along with residential space and a new city parking garage, as proof that measures outlined in the plan can work. The West Columbia development, across the Gervais Street Bridge, overlooks that city’s Riverwalk and is a gateway to a burgeoning State Street renaissance.

“West Columbia had an awful-looking parking lot. They came in and turned it from an awful parking lot a park with parking spaces,” Taylor said. “As soon as they did that and raised the appearance standards, private property owners began to invest their own money, and there’s nine restaurants now either renovating or locating in that area.”

Taylor emphasized, however, that he isn’t looking to personally invest in Five Points anytime soon.

“I used to own a whole city block down here. I can’t come back down here until everything’s fixed,” Taylor said. “This is my hometown, but I’m not going through a six-month permitting process to renovate a building again. Capital goes where it’s most welcome, and right now I think my capital is welcome in some other places a little bit more than it is here.”

Rickenmann said costs to the city to implement the plan would be minimal, limited to parking lot improvements which he said have already been budgeted and offset by monthly fees new businesses would pay.

Rickenmann and other leaders said that while parts of the plan could prove feasible in other areas of the city, it is Five Points-specific.

“This is the most iconic neighborhood that we have in this city, and it has been for a long time,” he said. “Everybody’s invested, and if this core can grow, we can encourage a lot more investment everywhere else.

“If you work and travel, there are a lot of communities growing right now, and we want to have those same opportunities. I think this is where we start.”

The 10-Point Plan to Renew Five Points would: