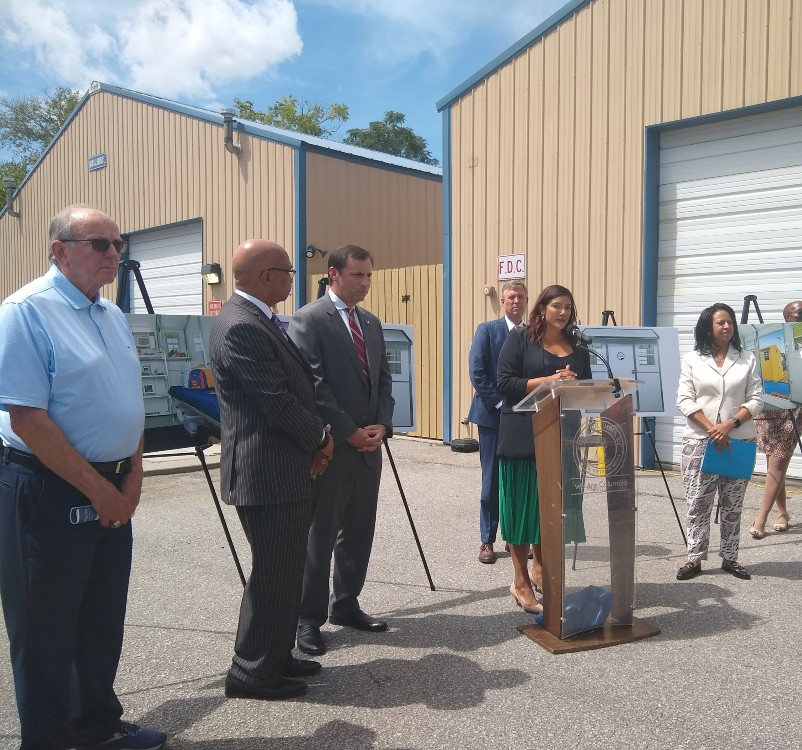 The City of Columbia on Tuesday unveiled a new concept for providing services to chronically unsheltered people in the city.

City officials announced the construction of a transitional housing project that will be built on city property at 194 Calhoun St., the location of the former Inclement Weather Center.

The site will now be known as Rapid Shelter Columbia and include 50 sleeping cabins, each designed to accommodate one person, with 40 for men and 10 for women. The congregate sleeping quarters that already exist at the Calhoun Street site will continue to be used to accommodate overflow population during inclement weather.

Construction for the project will be managed by the city and should begin later this month. The goal is to have the 50 sleeping cabins completed and ready for use by November.

Pallet, the company that manufactures the sleeping cabins, is based in Everett, Wash., with several staff members who have experienced homelessness in the past. Pallet sleeping cabin projects have been built successfully in places such as Boston and Sonoma County, Calif.

Columbia Mayor Daniel Rickenmann and other city officials said the need to find solutions for the homeless crisis has become more urgent in recent months, as the number of chronically unsheltered people in the area has continued to rise. He said the increase has resulted in a corresponding increase in calls to law enforcement and other officials about crime, public urination and defecation, panhandling and other issues.

There also has been a rise in the number of homeless people needing help with mental health issues and other services, he said.

“It’s estimated that we have at least 250 chronically unsheltered people right now in the city, and we want to help them have a place to lay their head,” Rickenmann said. “This is only a step, and not something that will solve all of our problems. Until today, we have not had any options for chronically unsheltered people in Columbia, and now we will.”

Columbia is the first city in the Southeast to launch a temporary housing project like this, Rickenmann said.

The Rapid Shelter will not only be a benefit for its clients but also for businesses downtown and in other regions of the city, said Carl Blackstone, president and CEO of the Columbia Chamber of Commerce.

“This epidemic of homelessness has impacted businesses in the city,” Blackstone said. “It’s not that they (businesses) don’t want to help, but they also need to make a living, and the rise in chronically homeless people on the streets has caused concerns from customers about safety, particularly at night.”

Rapid Shelter will not be available for “walk-up services,” officials said, meaning unsheltered people can’t simply arrive and get a place to stay. The residents of the cabins will first have to be screened by local homeless services providers and other experts to make sure they are a good fit for the Rapid Shelter.

City Manager Teresa Wilson said Rapid Shelter is the result of months of work and study by a city task force on homelessness. She said the new project is specifically geared to help men and women who, for many different reasons, are not good candidates for traditional homeless shelters.

The cost to build the Pallet cabin community is estimated at $800,000, officials said.

“We have many people living outside downtown and on the perimeter of the city who resist the services that are already in place and who choose to be on the streets,” Wilson said. “It’s been found that this population often does better in housing where they can have a single room to themselves instead of being in congregate housing. This is a way we can offer them housing and services with dignity and compassion.”

Officials haven’t yet determined how long residents would be allowed to stay in the cabins but said the project will be designed as temporary shelter while efforts are made to get clients into permanent housing.

The city will be working over the next few months to hire three full-time staff members to oversee the daily management and operations of Rapid Shelter Columbia.