Big deal? It was to Denny, paralyzed from the shoulders down after a work accident in 2010. But thanks to an adaptive wheelchair called a trackchair, Denny was able to go off-road into the woods in search of deer.

“It was an experience that I didn’t think I was going to be able to have again,” Denny said. “I got to places where I’d have never gone in this chair.”

The trackchair, the result of a Go Fund Me campaign started by Denny’s friend, is one example of the assistive technology transforming lives at a rapid pace. 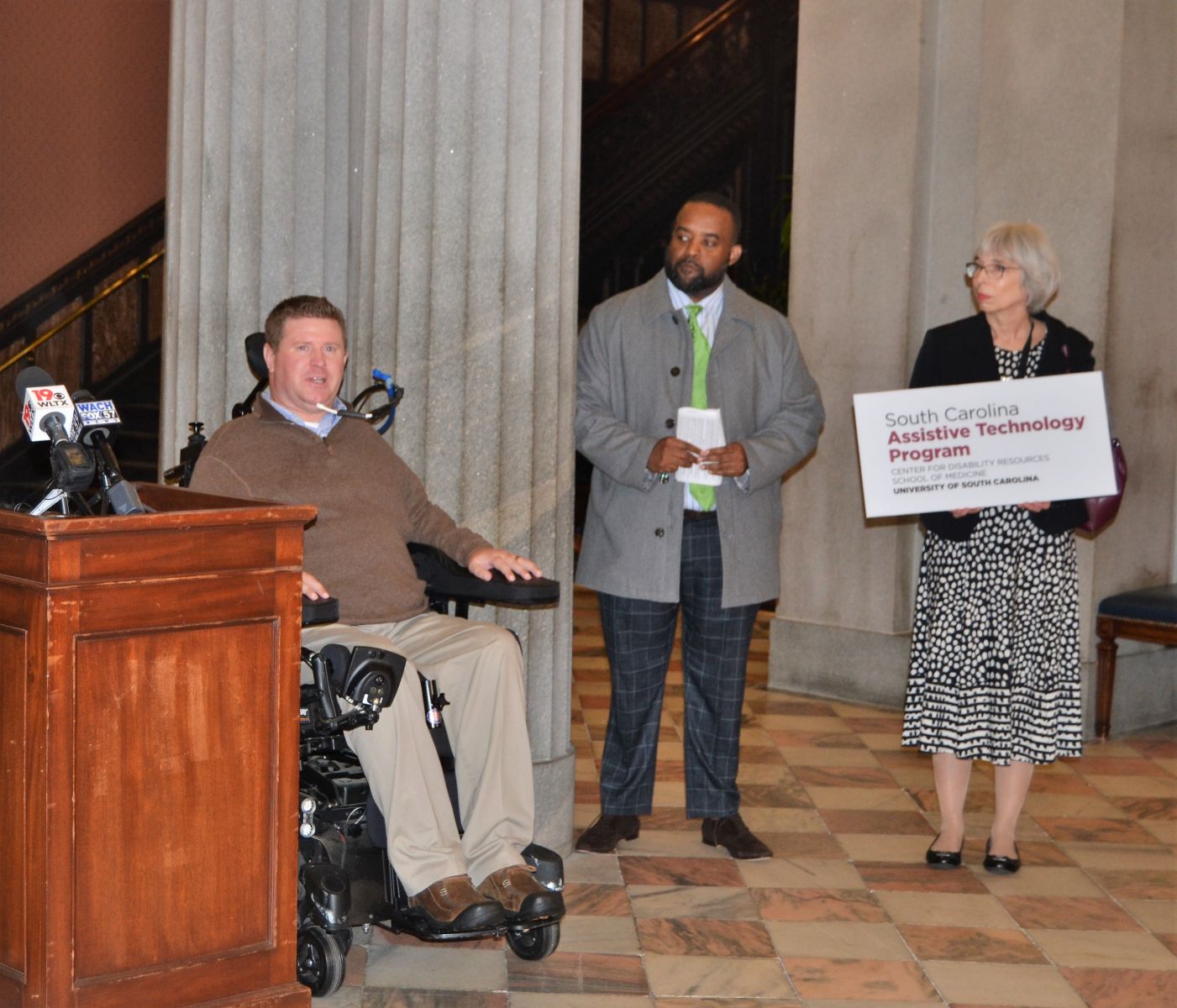 “I’ve been working in assistive technology for about 25 years now, and I used to could semi-keep up,” said Carol Page, director of the S.C. Assistive Technology Program. “Then the iPad hit the scene, and I’m doing far more research than I ever have before, because I know not to think that I know everything that’s out there.”

Page presented some notable advances on Feb. 26 during a ceremony in the Statehouse lobby declaring March Assistive Technology Awareness Month by proclamation of S.C. Gov. Henry McMaster. She demonstrated an iPad communication app to help nonverbal people express themselves and a video magnifier that enlarges words and changes screen contrasts.

Page also explained how an FM system, aimed at helping students who have trouble hearing or attending to what is being said, works: A professor wears a microphone that transmits directly to a student’s receiver, filtering out background noise. Page also showed off a C-pen reader, which scans text and reads words aloud, and an electronic spoon that helps compensate for tremors.

The state assistive technology program aims to match such advances with people who need them, often loaning out equipment so folks can try something out before spending money, Page said.

“We want people to use it during their regular day, in their natural environment, to make sure it’s a good fit,” she said. “A lot of funding comes from Medicaid and Medicare, and we want to make sure those are good decisions.”

That’s where Denny, outreach coordinator at the S.C. Spinal Cord Injury Association, comes in. He works with the program and Page to test new assistive technology.

“We’ve found different apps that work for different people,” Denny said. “She’ll get me to try some things out and see if it works, to see if it’s a good fit. It’s a great collaboration.”

The technological advances he’s seen since he was injured also amaze Denny. One of the first pieces of technology he discovered was a mouth-controlled stylus that allows him to use a computer or table and a smart phone, he said. He also frequently uses Bluetooth technology to control lights and TV channels.

“I’ve gotten to know my friend Alexa very well,” Denny said. “This technology allows me to be a dad still. It allows me to be a husband. I can still maintain my household and do things that I wouldn’t necessarily have been able to do without it.”

“What I’ve seen happen recently is advancement of the tablets, in particular, and just as importantly, the software that goes with it,” said David Rotholz, director of the Center for Disability Resources at the University of South Carolina School of Medicine. “It used to be that you’d have to buy, let’s say for speech, a speech synthesizer. Those used to look like huge toasters, very uncool, and they cost a fortune, probably at least seven or eight thousand dollars. Now you can run an app that might cost $200, and you run it on an iPad.

“That addresses two issues. One is, it’s much more powerful and user-friendly. The other is, it’s cool. Think of the kid who needs that. They used to carry around what looked like a toaster oven. Now they’ve got an iPad. It’s not just what a device can do. It’s how it’s actually used.”

Rotholz said USC has long advocated for student inclusion, pointing to the university’s CarolinaLIFE program. Operated by the College of Education, the program provides career education and training for students with diverse learning needs.

“That’s maybe not technology, but it all ties together, because now, parents of kids with special needs, including technology needs, come to the schools expecting their kids to be included, expecting to have the same opportunities as everyone else,” Rotholz said.

Like Page, Rotholz finds the pace of technological advancements breathtaking.

“The opportunities are just amazing. Technology helps make that possible,” Rotholz said. “What Brian was talking about with his wheelchair – I never heard of someone hunting from a wheelchair before.”

Denny said he’s also used his trackchair on hikes with his children at Sesquicentennial Park. And while he and Cooper didn’t bag any deer on their hunting trip, the chair also includes a specialized mount that allows him to fire a gun with his mouth.

“Brian is a prime example of what assistive technology can do for people,” Page said. “Sometimes when we first meet people, they’re isolated in their homes. They’re depressed. They are not able to reach out to family and friends or go to church anymore, or to community activities.

“We see a lot of people brighten up when they figure out that they’re not as limited as they thought they were and that there is a lot more that they can do.”

This article first appeared in the March 11 print edition of the Columbia Regional Business Report.