The New York Mets announced Sunday Tim Tebow would be promoted to its Advanced-A affiliate in Port St. Lucie, Fla. Tebow is the fourth member of the Columbia Fireflies to be called up this week.

When it was announced Tebow would join Columbia for the start of the team's second season, ticket sales increased along with Fireflies merchandise that bore the former Heisman Trophy winner’s name. Columbia’s first batch of adult jersey T-shirts sold out in less than 24 hours. 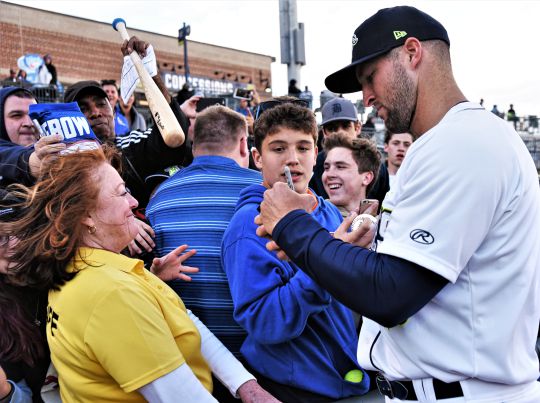 When the season began, more than 8,400 fans visited Spirit Communications Park for opening night. In total, 26,000 fans were in attendance during the team’s opening four-game homestand, 3,000 more than in the Fireflies’ inaugural season.

As of today, Columbia is second in the South Atlantic League in attendance, averaging 5,230 fans per game. That is compared with just 3,785 on average this time last season. Tebow’s popularity also spread to other teams; Charleston and Greenville each had their highest attendances when hosting Columbia.

Tebow, a Florida native, played football on two national championship teams at the University of Florida in Gainesville. In his NFL play, he led the Denver Broncos to the NFL playoffs in 2011, played for the New York Jets and made preseason appearances with the New England Patriots and Philadelphia Eagles. Tebow then switched to baseball, and on Sept. 8 he signed with the Mets. After spring training, Tebow was assigned to the Fireflies.

Tebow said in a news conference Sunday that he was thankful for the opportunity he’s been given by the Mets to pursue his baseball career and for his time in Columbia.

“I’m thankful for everything the Fireflies have done, and the support from the fans in Columbia,” Tebow said. “Everyone in South Carolina has been supportive of this opportunity, and we’ve had a lot of fun.”

Columbia team President John Katz said in a news release that Tebow brought experience and leadership to the clubhouse.

“We would love to have him all year, but at the same time we wanted to see him progress,” Katz said. “I’m a believer. This guy wants to progress, wants to get better; he’s got to be challenged by going up to the next level.”

Tebow played 64 games for Columbia and finishes with a .222 batting average, with three home runs and 23 runs scored. He led the team in doubles with 14.

“I’m going to take this next opportunity head-on and try to have some fun as well,” Tebow said.