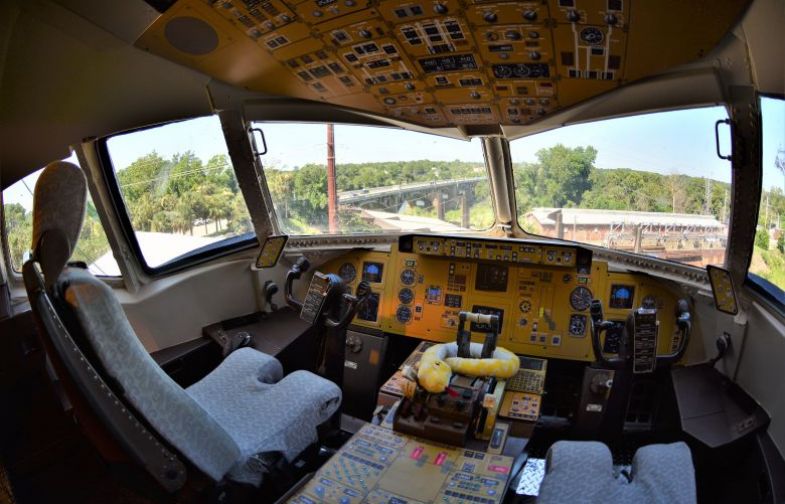 Edventure's new FLIGHT exhibit features a Boeing 757 cockpit that offers kids a chance to sit in the pilots' seats and get a bird's-eye view of the Gervais Street bridge. (Photo/Chuck Crumbo) 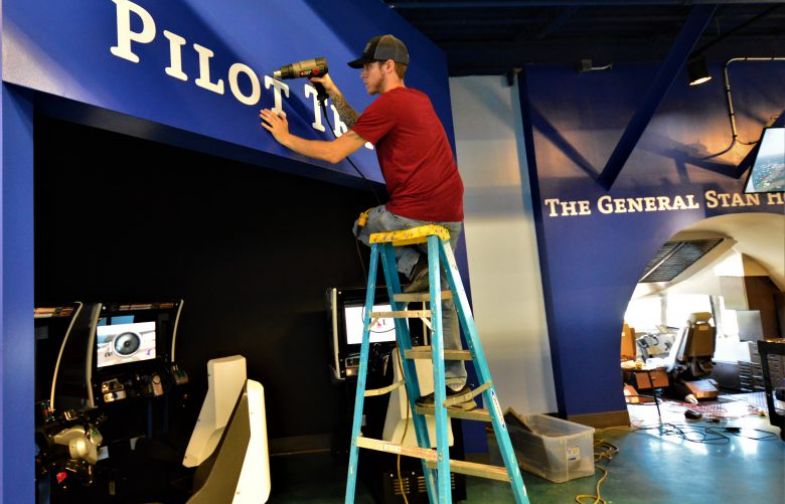 Nick Frame applies final touches to lettering above the area where visitors can learn how pilots train on electronic simulators. (Photo/Chuck Crumbo) 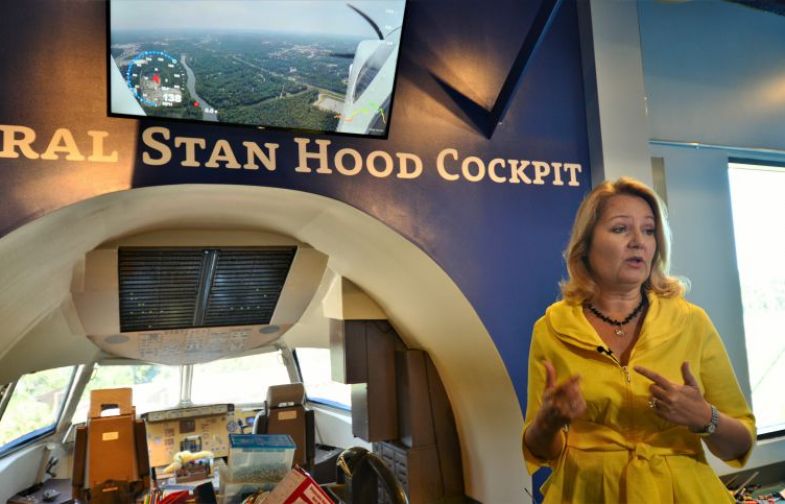 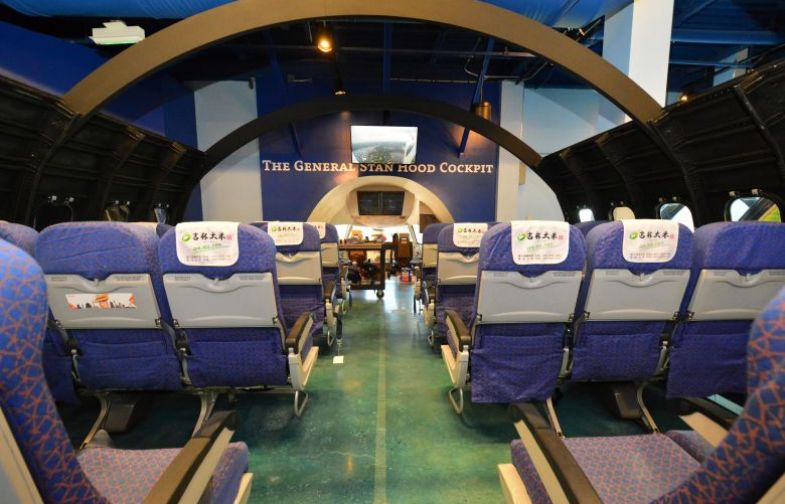 The exhibit incorporates a number of authentic airplane elements scrounged from boneyards including an airliner passenger compartment. (Photo/Chuck Crumbo) 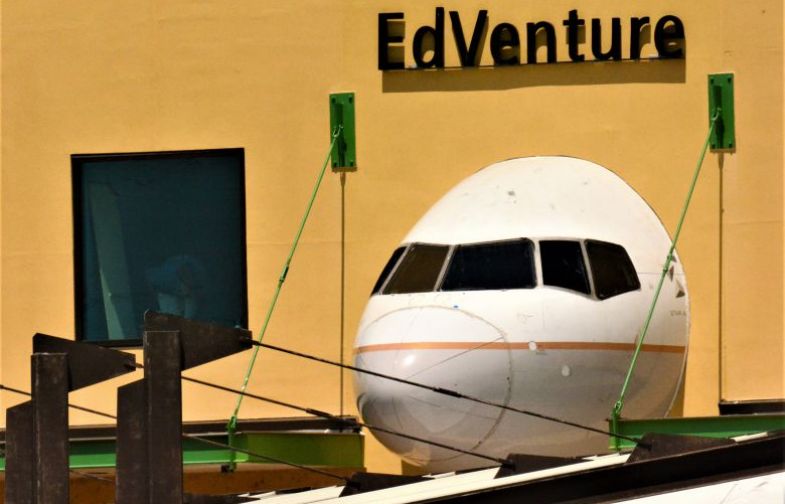 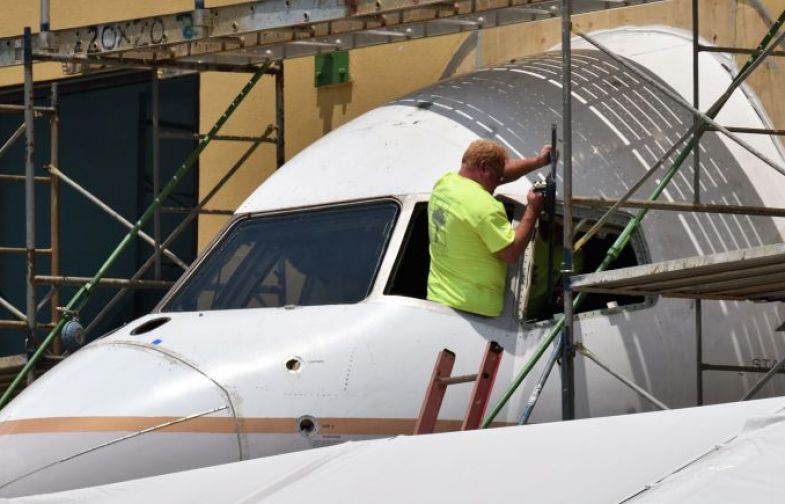 Because the cockpit windows of the Boeing 757 were salvaged to be used as spare parts, the museum needed to have new windows made to keep the elements out. (Photo/Chuck Crumbo) 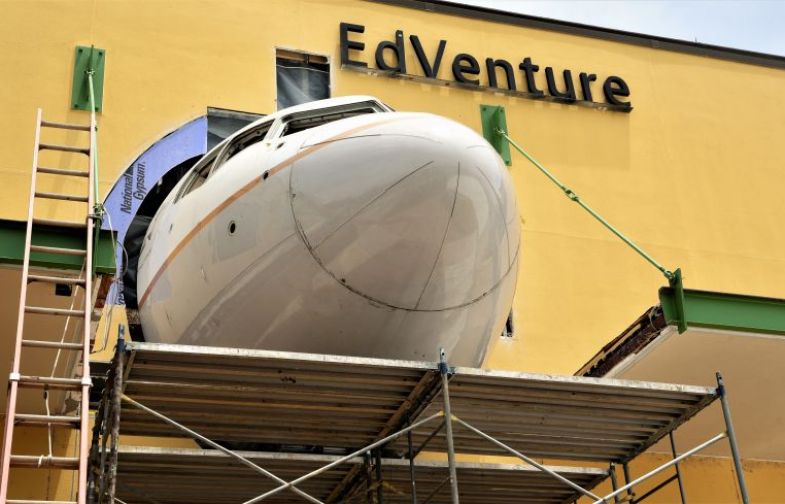 To construct the exhibit, a hole had to be cut into the outside wall so that parts, including a Boeing 747 engine cowling about 8 feet in diameter, could be hoisted into place. (Photo/Chuck Crumbo) 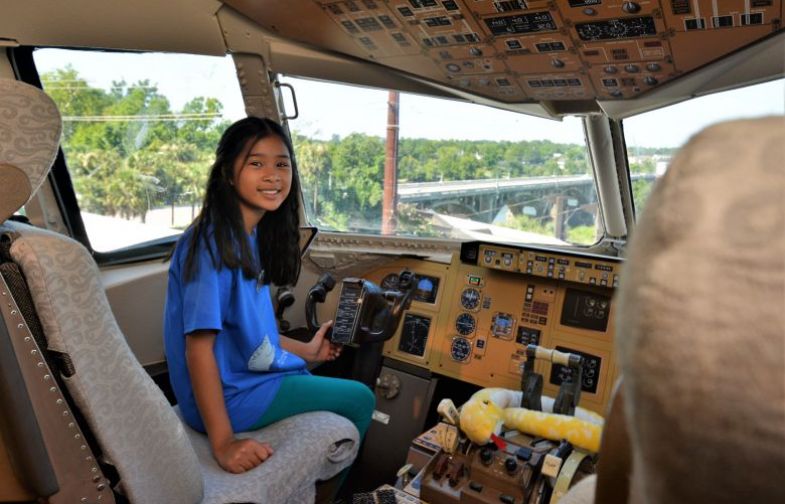 Maddie Fawcett sits at the controls of an authentic Boeing 757 cockpit that's part of the new FLIGHT exhibit at Edventure Museum. (Photo/Chuck Crumbo)

EdVenture’s newest permanent exhibit, FLIGHT, which features a Boeing 757 cockpit for kids to climb into, opens at 10 a.m. Saturday. Members will be able to preview the exhibit, supported by NASA and the City of Columbia, an hour earlier at 9 a.m.

The exhibit incorporates many authentic airplane elements scrounged from a boneyard including the cockpit of a Boeing 757 airliner. Kids will be able to climb into the pilots’ seats, play with the controls and enjoy a bird’s-eye view of the Gervais Street bridge.

Other features of the exhibit include a Boeing 747 engine cowling that’s 8 feet in diameter, a learning theater enclosed in the actual aluminum skin of a fuselage with two-dozen passenger seats; a child-sized wind tunnel; three Boeing 777 simulators; and, a video wall featuring local pilot footage flying over Columbia.

“If we are going to have enough people ready for manufacturing jobs in South Carolina in the future, we have to get children excited about science learning at the elementary ages,” said Karen Coltrane, EdVenture president and CEO. “This exhibit was designed specifically to link the excitement of flying to the career opportunities available throughout the sector. If we can get children to experience science as a fun subject with real world applications, we will have more people in the workforce pipeline in the future.”

Pulling together the exhibit was unique, Coltrane said. The original concepts from national museum exhibit designers did not excite the staff, she said.

“We sought feedback from the South Carolina Council on Competitiveness Aerospace Committee’s industry experts, and they had the same reaction we did,” she said. “So, we started working together to design the exhibit here and use their connections to source authentic airplane equipment.”

Coltrane herself picked the retired Boeing 757 cockpit from an airfield “boneyard” in Tupelo, Miss. “The process of working directly with industry experts has made this a much better exhibit,” she said. “We are now smarter about the business of flight, and our community partners understand more about reaching and teaching younger audiences.”

The most visible element of the new exhibit is the authentic Boeing 757 cockpit that now protrudes from the museum’s west wall. The cockpit has been named for retired Maj. Gen. Stan Hood, a long-time Columbia resident who started flying at the age of 14 and former commander of the S.C. Air National Guard.

Hood’s son, Mark Hood, owner and president of Hood Construction, oversaw the project to connect the cockpit to the building’s structure and install the 747 engine cowling.

“We had never installed an airplane to the outside of a building,” Mark Hood said. “But our team understood immediately how this exhibit could inspire children to pursue aeronautical careers. My dad always said the government paid him to do something he loved. I hope sitting in this cockpit and having a pilot’s view across the Gervais Street Bridge will get children excited about how science in school connects to fun jobs in the future.”

Mark Hood saw what Edventure wants to accomplish and jumped in with both feet, recruiting area subcontractors to help, Coltrane said.

“Likewise, I will always be grateful to Mayor Steven Benjamin for not laughing me out of his office when I told him we wanted to hang an airplane out of the side of the building. His and City Council’s support of this exhibit really made it all possible,” she said.

John Dozier, chief diversity officer and senior associate provost for Inclusion at University of South Carolina and chair of EdVenture’s board, said the museum is excited to offer the exhibit to the Midlands community.

“Many of our visitors have never flown before, and this exhibit not only gives them the sensation of flight, but shows that there is an entire industry behind the pilot for which science education can prepare them,” Dozier said. “Plus, how cool is it to see the Gervais Street Bridge from a real airplane cockpit?”