The day after New Year’s in 2016, a bit of unwelcome news interrupted Scott Middleton’s holiday relaxation.

“I was in North Carolina, and somebody said turn on the television,” Middleton said. “I flipped on my iPad and I saw my building going up in flames.” 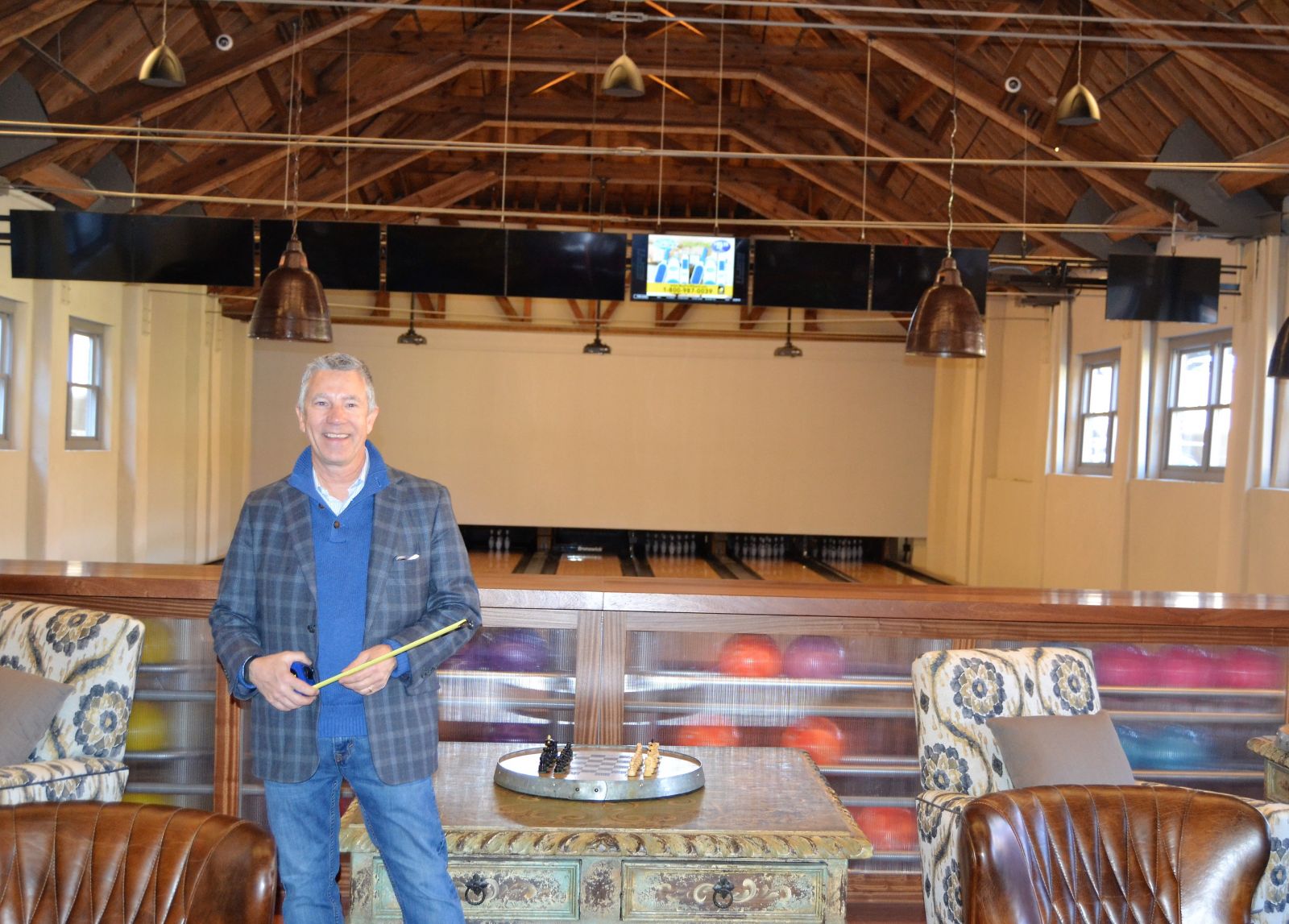 A spark from a welder’s torch had set afire the roof of the building at 1621 Main St. that Middleton owned and was developing into a restaurant and boutique bowling alley.

The damage was not extensive, but did set the project’s construction schedule back several months. While the original plan was to have The Grand, as the 15,000-square-foot restaurant, bar, lounge and bowling alley is known, open for the Aug. 21 total eclipse, the grand opening will now be Thursday, to coincide with the last “First Thursday” downtown arts and music showcase of 2017.

The Grand features two dining rooms that can be reserved for events, a copper-and-concrete bar that can seat up to 30 and comma-shaped private booths. Chandeliers glitter overhead, and diners can nosh on standard bar fare such as wings and burgers or filet mignon.

The back of the building opens up into a high-ceilinged lounge with overstuffed chairs and a selection of board games. Sunlight streams from large windows onto seven state-of-the-art Brunswick bowling lanes complete with automated scoring, retractable bumpers and mechanisms to measure the speed of the bowling balls – a rainbow range of color from purple to green to hot pink.

An outside patio will play host to bocce ball and bands, and a downstairs tap room will let craft beer lovers serve themselves 10 state brews and four varieties of wine, paying by the ounce with an electronic wristband.

“With the sheer amount of things going on, it can really be a destination,” said Joe Nester, vice president of digital marketing for LTC Health Solutions. “We really feel like people are going to come in here and spend a lot of time, meeting friends and hanging out.”

LTC discovered the booming 1600 block of Main Street, where three new businesses opened in November alone, when it located its own offices there. The company soon branched out into the restaurant and retail business.

Scott Middleton developed The Grand along with his son, Greg. Scott Middleton has had a front-row seat to the project’s progress from the upstairs apartment he and his wife maintain.

“I always see where the flaws are in stuff, but actually, it’s very close to what we envisioned when we really started thinking about this,” Middleton said during a sneak peek inside The Grand late last month. “If you go back and look at some of the original renditions that the architects did, it’s pretty much there.”

The Grand’s home is known as the Robinson building and dates back to 1866. It most recently housed an Army/Navy store. The property, and the adjoining building being rented by newly opened ladies boutique clothing store SugarBelle, was restored to 1910-era specifications with the help of local, state and federal tax credits promoting historical renovations.

The lanes will open at 9 a.m. every day, with food service beginning at 11 a.m. Weekend brunch is in the works. The Grand will close at midnight Monday through Thursday and on Sunday and remain open until 2 a.m. on Friday and Saturday. After 10 p.m., it’s a 21-and-up affair.

“On Main Street, there really aren’t activities,” he said. “You can go to a movie, but other than that, shopping and eating is about it.”

There is street metered parking available, as well as access to the Cannon Parking Garage at Taylor and Sumter streets.

A handful of training events have been held, Middleton said, and the sound of rolling balls and toppling pins doesn’t filter to the front of the restaurant. Even so, 30 sound panels are being installed to further absorb sound.

The downstairs tap room features a pool table and a nod to ‘80s nostalgia with Galaga and Pac-Man arcade games. Nester hopes it will also display the original sign that marked the building’s time from 1909-1914 as a vaudeville and silent movie theater. The sign, unearthed from the dirt near where the bowling lanes were constructed, revealed the name of that theater: The Grand.

“It was really cool finding it. It kind of inspired the name,” said Nester, who said several possibilities had been floated before the discovery of the titular sign, which is being restored.

The Grand’s lane rental rates vary from $25 to $40 per hour, depending on day and time. Shoe rentals are $4 per person.

“We really want it to be a place where people can come and spend the day,” Middleton said.

This story first appeared in the Dec. 4 print edition of the Columbia Regional Business Report.