Seated on the green brocade couch in the eclectic lobby of the downtown hotel she co-owns with her husband, hair swept into a casual updo and an oversized sweater providing defense against the breath of autumn in the Columbia air, Rita Patel looked right at home.

And well she should, as she estimated she and husband Marcus Munse have spent 98% of their time at Hotel Trundle since opening the boutique hotel at the corner of Sumter and Taylor streets in April 2018.

That hands-on dedication has paid off in a slew of awards, including adaptive reuse and design honors from real estate website GlobeSt.com and Historic Columbia, as well as the inaugural People’s Choice award from Columbia American Institute of Architects. Most recently, the 41-room hotel, which transformed three empty downtown storefronts, was invited to be a part of Southern Living magazine’s Hotel Collection, a curated network of 24 recommended hotels, inns and resorts across the South.

“When we first opened, I would say we were like a blip on the radar,” Patel said, as guests filed down the hotel’s lavender, wrought-iron staircase for the daily social hour, with snacks from Taylor Street shop Sandwich Depot. “But now we’re a legit presence on that radar.” 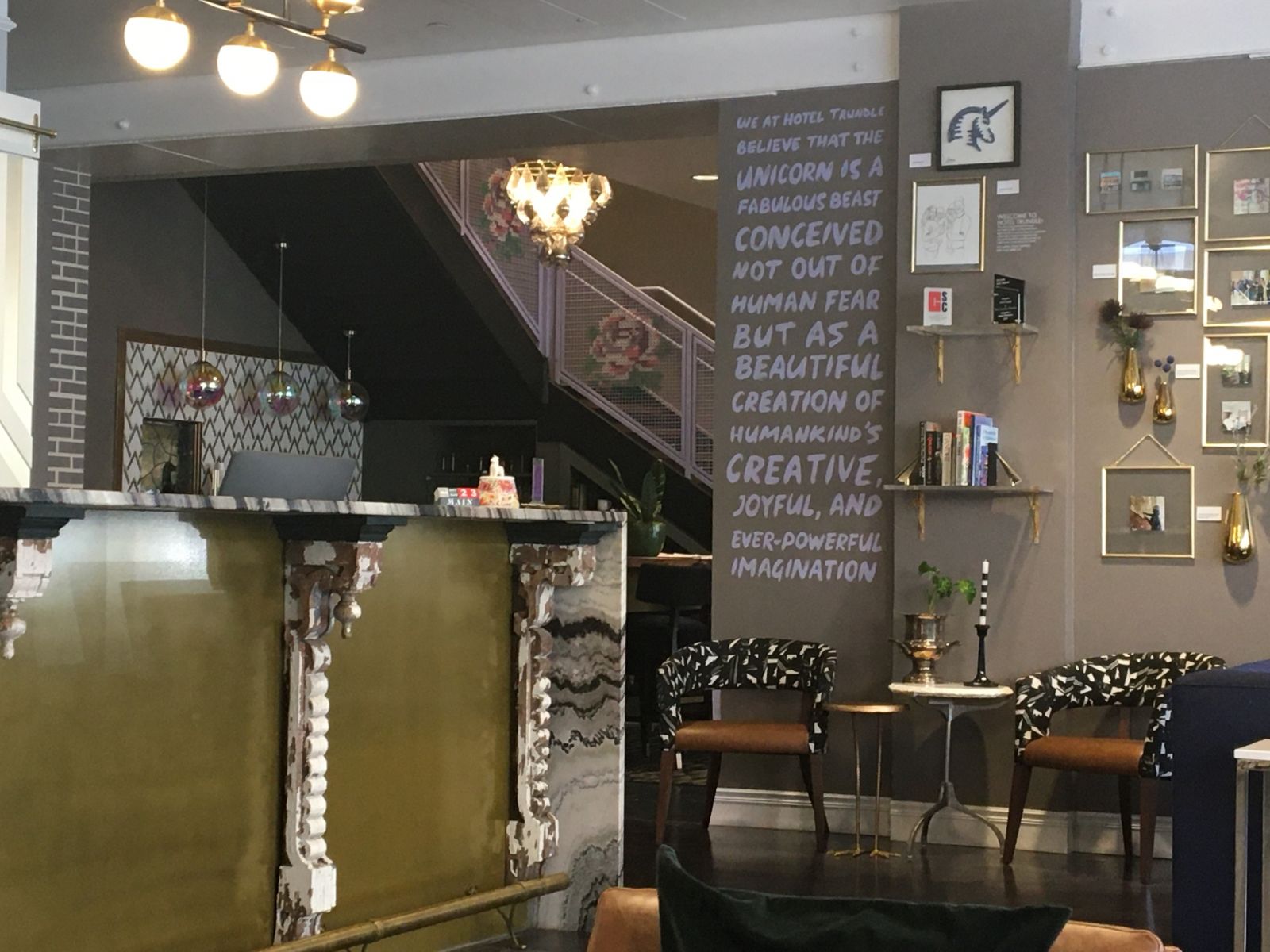 That change didn’t come about just by relying on word of mouth, which Patel says has helped the hotel grow. Patel handles most marketing functions behind the establishment’s cool and constant social media presence, and she and Munse are also active in the Columbia community. Comments such as those touting Hotel Trundle as “quirky” with a “fantastic staff” and “perfect” rooms on Expedia.com, where the hotel averages 4.9 out of five stars in 132 reviews, certainly don’t hurt, either.

“We’ve been able to hear what our guests’ comments are, and we’re able to make changes and add things,” she said.

Patel said occupancy varies seasonally, with July and December being slowest. But more often than not, at least half the rooms are filled, and “we have not had an empty hotel yet,” she said.

Out-of-town business travelers make up a large share of Hotel Trundle’s customer base, Patel said, though the hotel also does a brisk business in weddings, anniversaries and other special events, along with in-town staycations. And lodgers have included a few famous faces, including actress Vivica Fox.

“She sat with the entire staff and took pictures with them,” Patel said. “She was amazing.”

Patel is no stranger to the hospitality industry. Her parents have run large, branded hotels since 1978, including the Holiday and Inn and Suites in West Columbia where she once worked the front desk for $8.50 an hour. She and Munse, who served a stint as that property’s head of maintenance, saw enough there to know what they wanted — and what they didn’t — in their own hotel.

Patel admits it can be difficult not having the advertising might of a branded hotel behind her marketing efforts, but she enjoys having freedom to make design or accommodations changes.

Guests are offered local wine or craft beer at check-in. If a breakfast diner has a gluten allergy, Patel can have gluten-free muffins delivered from Main Street bakeshop Ally & Eloise. And if someone, like a recent reviewer, finds the toilet paper a tad too rough, Patel can remedy that immediately, too.

Since Patel and Munse were first announced as the investment partners behind Hotel Trundle in November 2016, Patel said her parents have embraced the hotel’s smaller scale.

“It’s hard to think outside of the box if you’ve always been in the box, like branded hotels,” Patel said. “But even if they (my parents) were worried, they definitely put 100% encouragement behind us. They still give us advice every day, and we took advice and we refused advice, too. You have to go with your gut.

“One of the biggest lessons I can take away from opening Hotel Trundle is to just keep your eye on what your original vision was and not let everybody nitpick at it and try to make it something that it’s not.”

Patel’s vision is evident in Hotel Trundle’s distinctive design, which includes seasonal decorations greeting guests at the glass front doors, disco ball planters inspired by a recent stay in a New York hotel and a display on the stairwell wall spelling out “Live Joyfully Dream Fearlessly” in greenery. Munse, who emerged from his office to mingle with guests before dashing off to pick up the couple’s two boys from school, handles the back-of-the-house operations.

“We’ve naturally found our lane and are happy where we are,” said Patel, who gleefully shared that she has no idea how to run Hotel Trundle’s operating system. 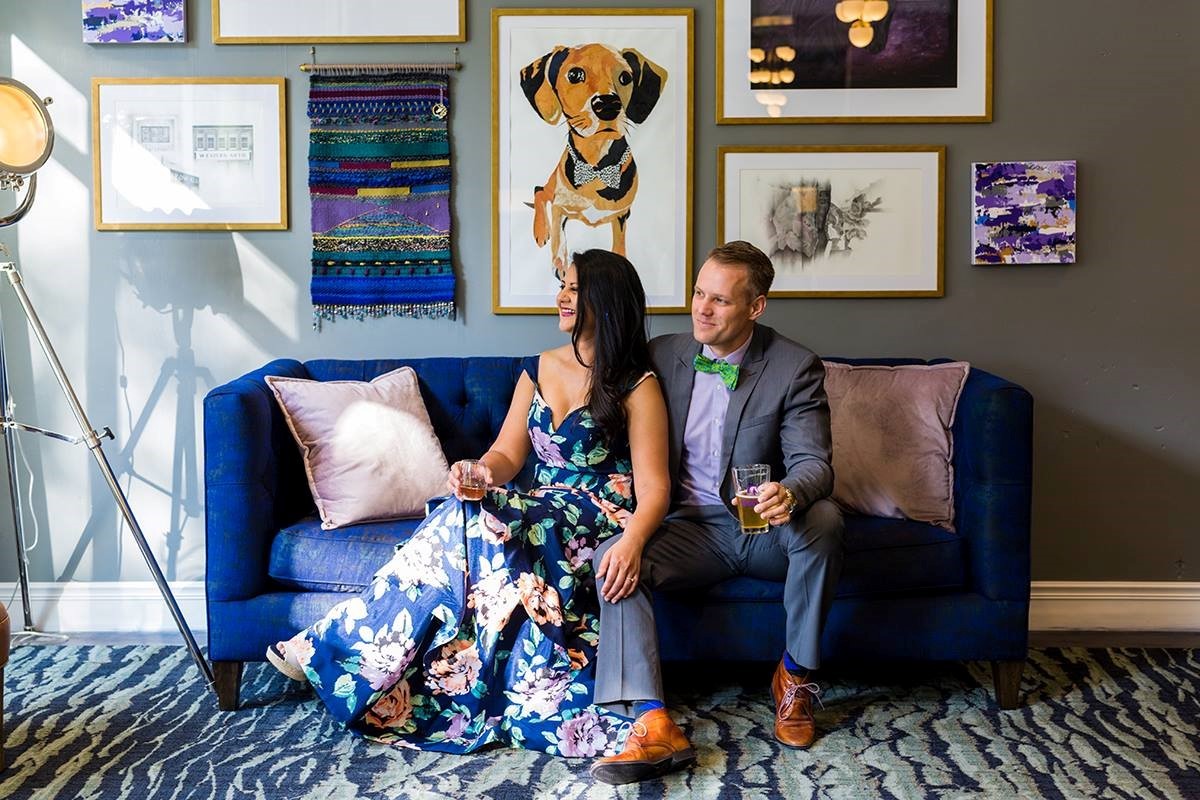 Hotel Trundle has a staff of 20, including front and back of the house, maintenance and interns. The interns help Patel maintain the hotel’s social media, which recently included Munse preening in front of a butterfly wing mural painted on the side of the hotel to entice selfies.

“Sometimes it’s tough, because if you think about how complex your own life is, times that by 20,” Patel said. “You have to give everybody time to talk, time to cry, time to laugh — and I want to. We’re very involved with our team. ... Me and Marcus are very accessible, so if there is anything that they (guests) need, we’re here and we can make decisions, and we let our team make decisions.”

Patel has a wish list that includes making more storage magically appear and adding a second elevator. And there are long-term plans to add locations, likely locally at first, she said.

“It’s always a work in progress,” Patel said. “We’re still kind of working towards what we think is successful. We have been successful in lots of things, but our ultimate goal is to have three Hotel Trundles. ... We’re always keeping our ear to the ground about opportunities, but of course, timing has to be right. Financing has to be right.”

Patel, who said she often walks to work from her Cottontown home, added: “Right now, in our lives, it would be in this area, somewhere we could be at home by 5:30.”

The boutique hotel market is on the upswing in Columbia. Aloft Hotel, a unit of Starwood Hotels & Resorts Worldwide Inc. that has S.C. locations in Greenville and North Charleston, opened in 2016 in the Vista. In August, the Columbia Board of Zoning Appeals approved a height variance for Hotel Anthem, part of Hilton’s Tapestry brand of boutique hotels, on Gervais Street. And the former Inn at USC at 1619 Pendleton St. has been transformed into a branch of the Graduate Hotels group from Chicago-based Adventurous Journeys Capital Partners, a cozy style tailored to university towns.

City officials aren’t yet worried about market oversaturation, though, even with a Holiday Inn joining a Sheraton and a Marriott downtown by year’s end.

“It’s because of the variety,” said Matt Kennell, CEO of downtown economic development group City Center Partnership. “You’ve got the points (program) hotels, and then you’ve got Trundle. I think the Holiday Inn will be more of a modern value hotel with a different price point than the Sheraton or Marriott. Trundle is a whole different experience. I think they’re different enough that there’s room in the market for everybody.”

Patel expects Hotel Trundle occupancy may dip a bit as nearby hotels come online, “and then it will go back to normal, because everybody wants to try something new,” she said. “That’s OK. As a consumer, I would do the same thing. We try really hard to be the best hotel that we can be and be really involved as Hotel Trundle, not as Rita and Marcus but as Hotel Trundle, and keep our guests coming back.”

This article first appeared in the Nov. 4 print edition of the Columbia Regional Business Report.