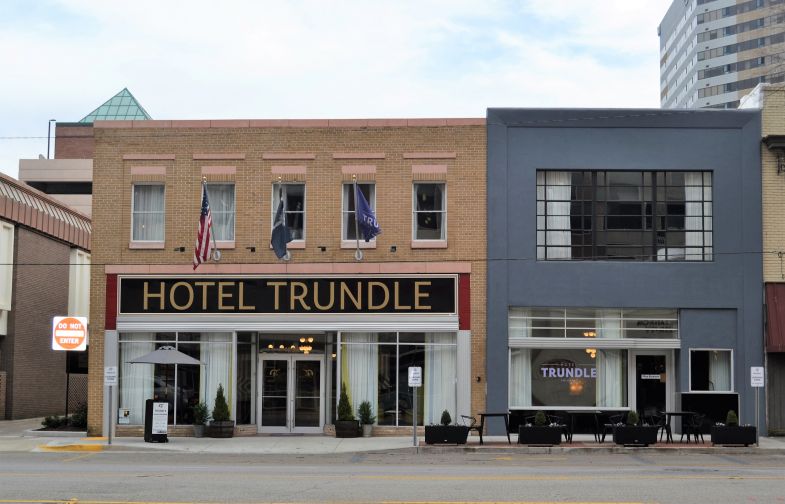 Hotel Trundle, open again after closing for about a month amid COVID-19 concerns, is launching Toilet Paper Tuesdays in June. (Photo/File)

Open again after COVID-19 concerns led it to close its doors for a month, Hotel Trundle is sharing its happiness with the community — in the form of toilet paper.

The downtown boutique hotel at the corner of Sumter and Taylor streets is partnering with other local businesses to launch Toilet Paper Tuesdays. Every Tuesday in June from 11 a.m. until 1 p.m., hotel team members will distribute a case (about 80 rolls) of toilet paper among the first 80 drive-up requesters.

“We still see the toilet tissue aisles bare in the grocery stores, and we are able to help out a little by providing the community a free roll or two," Rita Patel, Hotel Trundle co-owner, said. "It can offer a little normalcy in a world where nothing is normal right now."

Patel said the hotel is able to get toilet paper easily and cheaply through its vendor and wanted to share its bounty. Patel and Marcus Munse, Hotel Trundle co-owner and Patel’s husband, are also offering local businesses a chance to include coupons or promotions with the TP giveaways.

“Sometimes it's just the little things that make the biggest differences," Munse said. "As we slowly open back up, we want to include as many small businesses as possible, because we need each other now more than ever.”

Hotel Trundle reopened May 11, a little more than a month after temporarily closing its doors a few days before its second anniversary on April 9 amid decreasing reservations and growing health worries. Patel said business started off slow but has steadily increased, with 18 rooms currently booked.

“I think we made the right decision,” she said. “We did it because people were starting to inquire more about if we would be opening. That was a sign that maybe people felt like it would be safe to travel.”

April data from the U.S. Department of Labor’s Bureau of Labor Statistics found that the hospitality industry lost 7.7 million jobs as the pandemic shuttered businesses and kept people at home. South Carolina’s leisure and hospitality industry lost 125,300 jobs from March to April as the state’s unemployment rate soared to 12.1%, according to the S.C. Department of Employment and Workforce.

Patel said Hotel Trundle took advantage of available small-business assistance, including a loan from the federal Paycheck Protection Program, and was able to retain all its employees, though hours have been reduced. So have room rates as the hotel tries to lure guests. A standard room with two queen beds, normally $189, can now be booked for $109, she said.

“We’re doing that because the market needs it right now,” Patel said. “Everybody’s being very conservative with how they’re spending. I understand it because I’m a consumer too.”

Hotel Trundle’s reopening has come with other changes, including enhanced cleaning procedures detailed on its website. Its fitness facility is currently closed (guests are able to access the nearby YMCA), and when it does reopen, Patel said guests will likely reserve individual time with equipment wiped down between each use.

“It’s like we’re reopening, just dealing with a completely different set of challenges and things to work through and different processes, which there’s no precedent for,” Patel said. “There’s so much communication that has to happen seamlessly between front of the house, back of the house and guests, but people have been, for the most part, very understanding.”