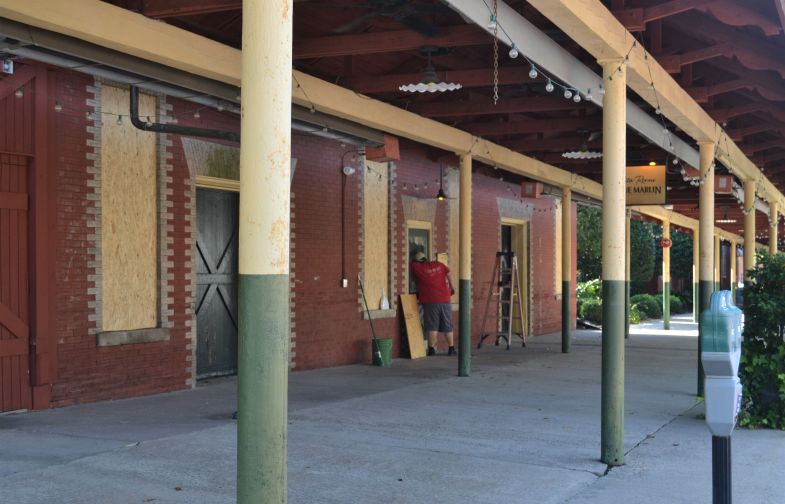 Windows are boarded up at the Blue Marlin, a fixture on the Vista dining scene damaged during area protests on Saturday night. (Photo/Melinda Waldrop) 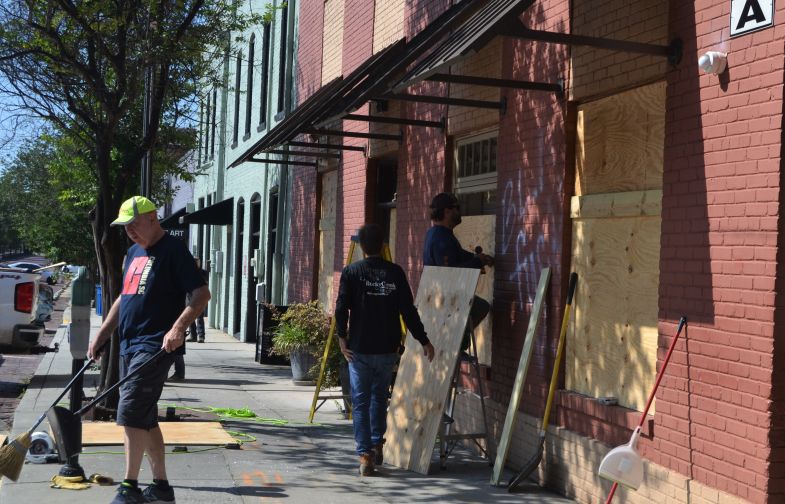 Workers from the Vista Guild's Clean and Safety team board up broken windows at Sandler’s Diamonds & Time jewelry store on Sunday. (Photo/Melinda Waldrop) 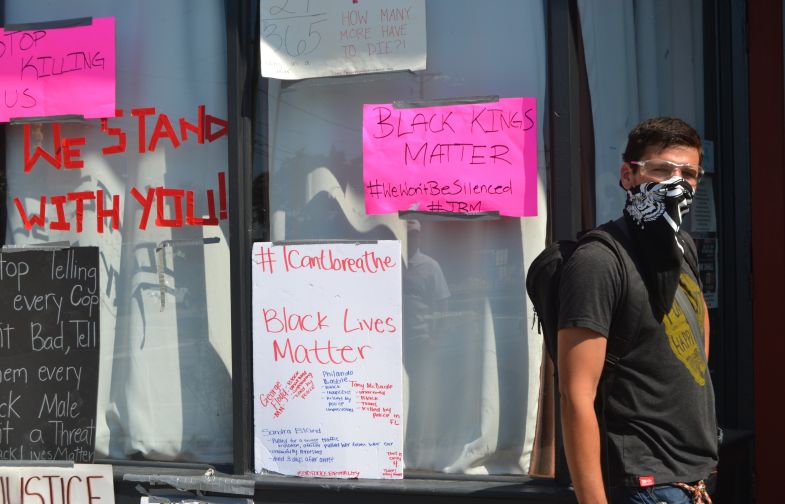 Mason Crowson, owner of The Aristocrat bar and music venue, collected signs from around his Washington Street establishment on Sunday morning. (Photo/Melinda Waldrop) 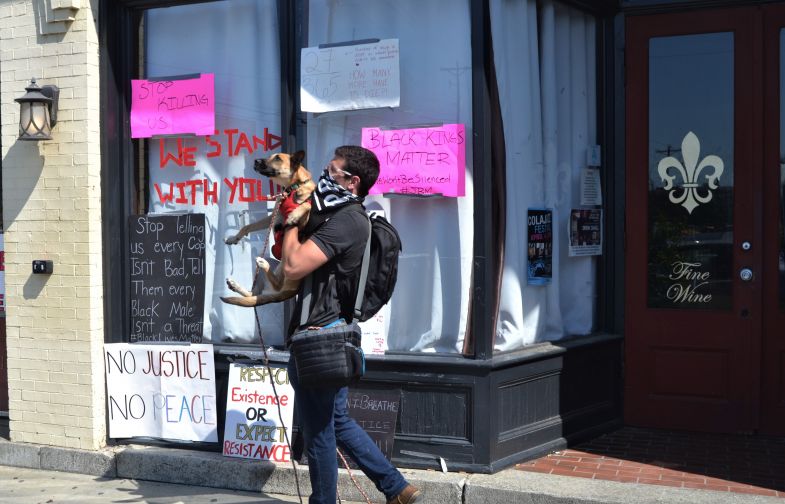 Mason Crowson cleaned up around his Washington Street bar, The Aristocrat, on Sunday with the help of his dog, Roosevelt, named in honor of Eleanor Roosevelt. (Photo/Melinda Waldrop) 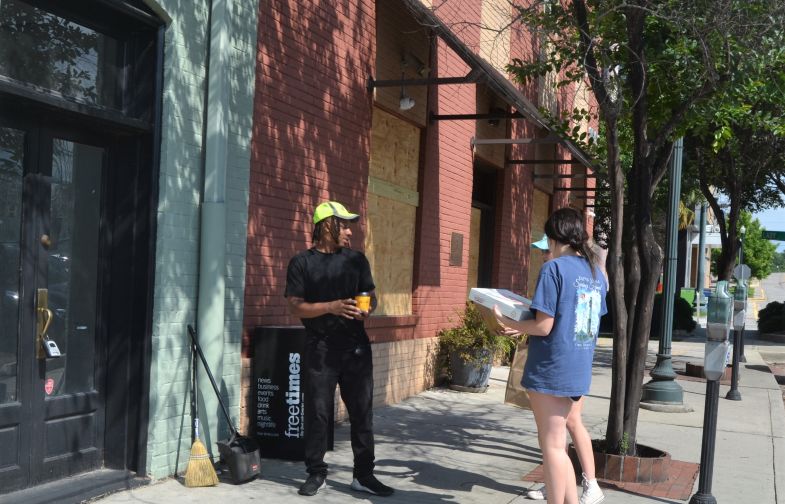 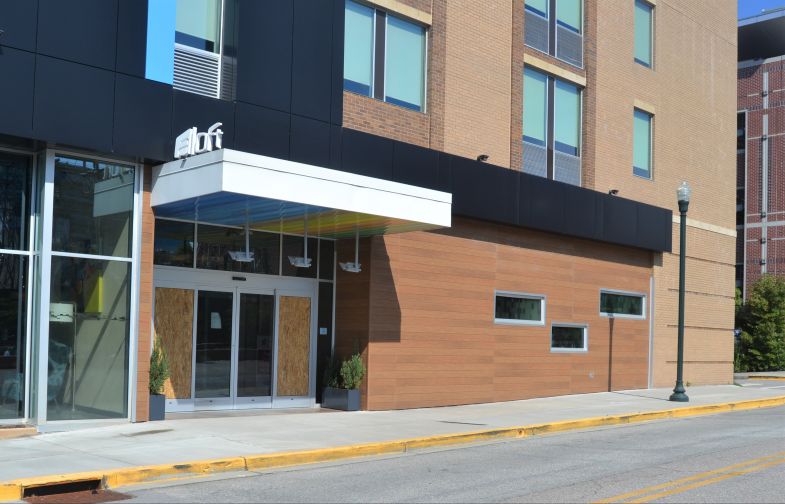 The side doors of the Aloft hotel at 823 Lady St. in the Vista were boarded up Sunday morning. (Photo/Melinda Waldrop) 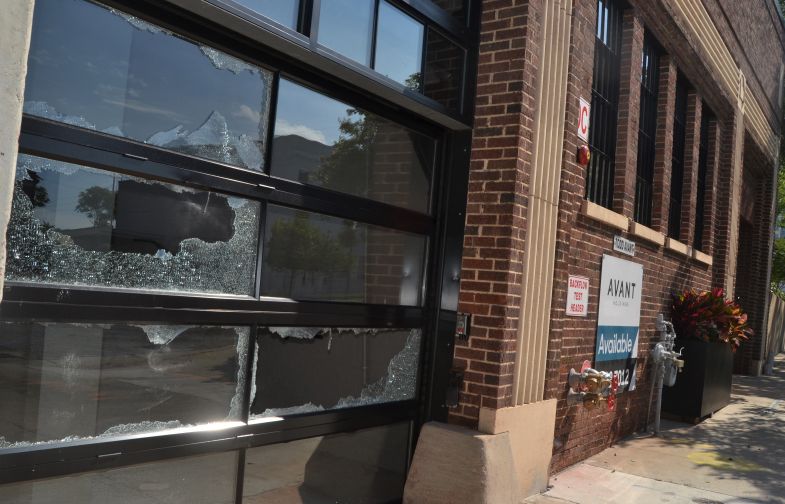 Broken windows in an apparently vacant storefront on Lady Street in the Vista. (Photo/Melinda Waldrop)

Crowson owns The Aristocrat, a cocktail bar and music venue located at 1001 Washington St., close to Columbia Police Department headquarters. He had a front-row seat as Saturday’s I Can’t Breathe march in downtown Columbia protesting the death of George Floyd in Minneapolis moved from the Statehouse to 1 Justice Square in the Congaree Vista, where what participants described as an initially peaceful protest took a turn.

Water bottles were thrown, police cars burned and a state of emergency restricting movement (.pdf) was issued for parts of downtown from 6 p.m. Saturday until 6 a.m. Monday. Columbia Police Chief Skip Holbrook told The State newspaper that four police officers and a firefighter were injured and multiple arrests were made, including that of an individual who allegedly fired a weapon.

Harman said he felt officials should have addressed the crowd as protesters gathered at police headquarters, but he also praised police restraint. “For what they were up against, I do think they showed a lot of restraint,” he said. “There’s a lot of anger out there and people don’t feel like they’re being heard.”

Crowson did what he could to provide calm amid the nearby chaos.

“I set up an outdoor table out here and probably took care of 1,000 people yesterday in regard to water, bathroom, a cool floor to lay on,” he said. “We were hosing people down if they got (pepper) sprayed.”

On Sunday morning, the intact front of The Aristocrat was covered with signs Crowson collected as he cleaned up debris around the establishment, bearing slogans such as “No Justice No Peace” and “Stop Killing Us.”

Crowson, who had yet to leave his bar as of 10 a.m., said he offered assistance for “solidarity. … Food and water went to police, too. This wasn’t a one-sided agenda to any degree. This was just making sure everybody was safe.”

“We were just out here doing whatever we could. … When I saw people shirtless and laying on the ground, I was like, ‘Come get some water, come lay inside, come use the bathroom.’ ”

Bits of broken glass sparkled in the sunshine a block from The Aristocrat on Lady Street. Broken windows stared from one storefront, which appeared vacant, while farther down the street, workers from the Vista Guild boarded up other damaged businesses, including Sandler’s Diamonds & Time jewelry store and Vista dining fixture Blue Marlin.

J.P. Walters, a member of the Vista Guild’s Clean and Safe team, took a break from sweeping up glass to accept coffee and doughnuts offered by passersby. He said he’d been working most of the morning to repair the damage, which he said was unlike anything he’d seen in his two years with the organization.

“It’s not good, especially when all these businesses were just trying to get reopened with the pandemic and kind of getting started again, and now having to face this,” Naas said.

Naas said 10 to 20 businesses up and down Gervais and Lincoln streets were left needing repair.

“The good news is that as of now, it’s just windows and some looting. Let’s hope it stops there,” she said. “I think a lot of businesses also lost a lot of profit last night with having to close early, and then with today as well, having the curfew in place just to keep everybody safe.”

As the guild crew worked, people rode bikes across the Lincoln Street bricks. A woman, rolling suitcase in hand and face partially covered with a mask, waited to cross the street in front of the Aloft hotel, which had plywood in place of glass doors on the side of the building.

“Hopefully we can get through today safe and nothing further will happen, and then we can get to Monday and start with a bigger cleanup and start getting back to business as usual as best as we can,” Naas said.