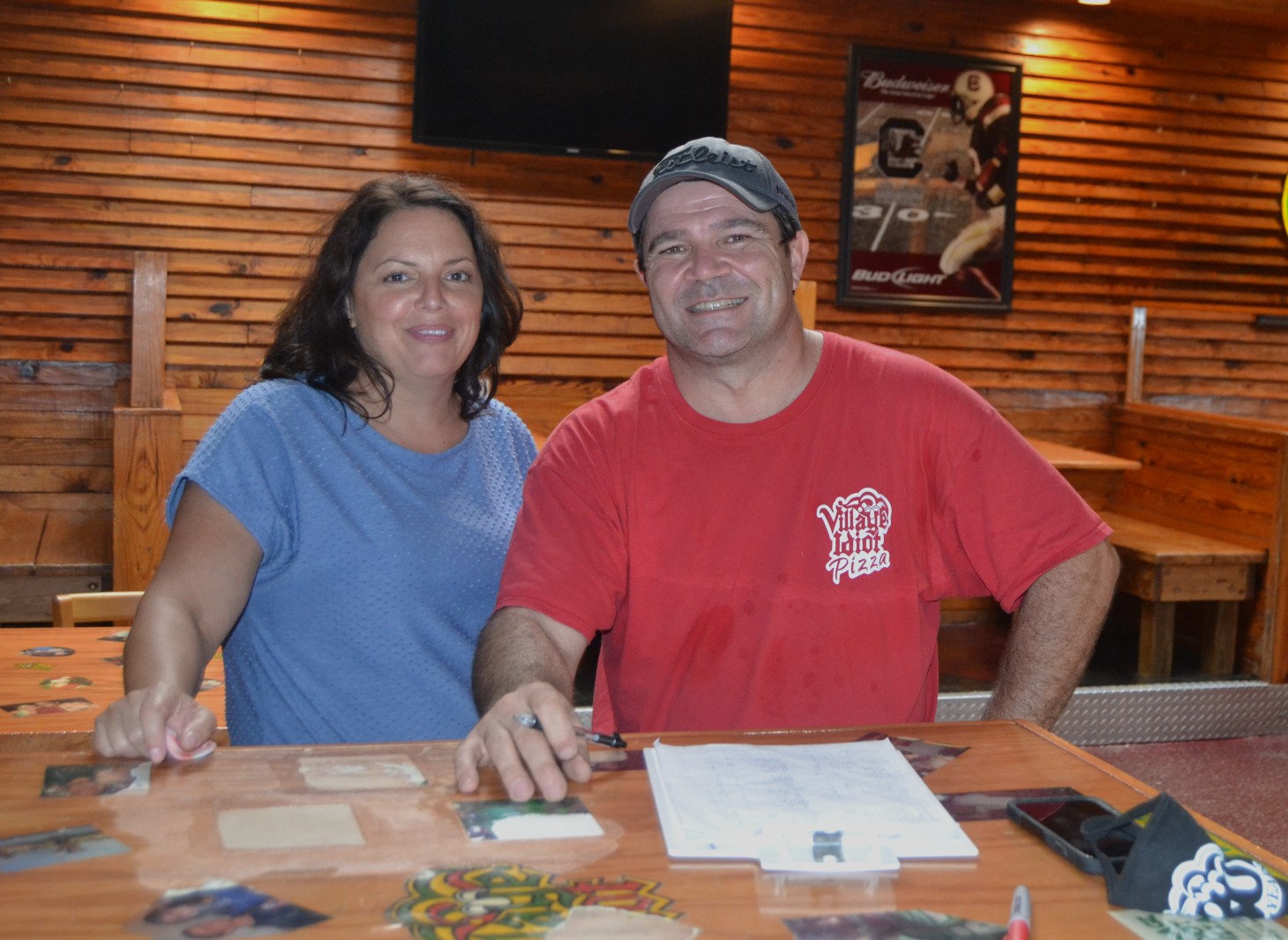 As anniversaries go, Brian and Kelly Glynn may not be having the big bash a 30-year milestone warrants, but like a lot of things in 2020, the husband-and-wife ownership team of the Village Idiot is making the best of it.

The venerable area pizza parlor, with three Columbia locations, is celebrating the landmark anniversary of its flagship Five Points location amid a pandemic that closed its doors for six months. And while the COVID-19 health crisis has changed the tenor of the party, it has only increased the Glynns’ appreciation for the community that has made it possible.

“We did not want it to go by without celebrating the fact that that’s a huge milestone,” Kelly Glynn said. “We have worked very hard since we took over ownership to have brand awareness in the community, to support the community. ... We want everyone to know that we’re thankful to be here.”

Kelly was waitressing at the Village Idiot, opened in 1990, in 1994 when she met a cook who would become her husband. After working at the restaurant throughout school, the couple branched out into different areas of the hospitality sector but kept in touch with Village Idiot ownership. In 2003, a series of connections led them back to their beginnings, and they bought the place where their careers and relationship started.

“We had both been in the industry from the time that we could work,” said Kelly, a native of Alexandria, Va., and a graduate of the University of South Carolina, where she studied business and accounting. “It wasn’t a shock that we kind of came back to it.”

Added Brian: “It was good fit. We knew the place. We knew it what it could go in its best times. We knew what it couldn’t do in its worst times. They had sold it to another guy in ‘95 and we bought it from him. We kind of knew little things that needed to be changed.”

The business grew in 2009 with the opening of a Forest Drive location and again in 2015 when a third location opened in Olympia. The new locations helped cement the Village Idiot’s place as a community stalwart and not just a college hangout, Brian said. The Forest Drive location in particular was designed to be reminiscent of the pizzeria in Albany, N.Y., he grew up working in.

“It’s like a neighborhood pizza place where you support the Little Leagues teams and you support the church and school programs,” Brian said. “We did that from here before we opened up there as well, but with perception of, ‘Oh, it’s Five Points,’ some groups were a little apprehensive about what we are. Having that location kind of legitimized it. We’re not a one-trick pony.”

The Olympia location serves both the off-campus college students who live nearby and Gamecock fans on their way to Founders Park and Williams-Brice stadium as well as surrounding neighborhoods. Brian calls it a “hybrid,” with a mix of dine-in and takeout with a smaller bar than the Five Points flagship.

“We really didn’t have a plan over there,” he said. “It was really just let’s kind of organically let it run a path and see how it goes.”

Both of the newer locations become unexpectedly important six months ago, when growing safety concerns led to a once unthinkable decision. With a staff made up largely of USC students who didn’t return when the campus closed after Spring Break because of COVID-19, a second-floor dining room accessible by a close-quarters staircase, and parking not as amenable to curbside pickup as the other locations, the Devine Street mainstay closed its doors.

“We closed on March 23 and we opened back up Sept. 23,” Kelly said. “We were maintaining things pretty well at the two. If we went much further, we just didn’t see the ability to open back up, so we kind of just ripped the Band-Aid.”

It was a development that threw even the seasoned restauranteurs for a loop.

“There’s nothing really that has surprised me in this business. We’ve been in it a long time,” Kelly said. “You just kind of go with the flow. It something comes at you, you figure out how to fix it and you just move on. That’s kind of the entrepreneurial spirit. … until COVID happened.”

The Glynns concentrated on a robust pickup and delivery business keeping the newer stores afloat while paring operating procedures at their flagship with an eye towards reopening leaner but prepared to follow safety protocols.

“We were luckier than most places, just given what we serve,” Brian said. “With pizza and wings, we already did a good bit of pickup and delivery, so our menu could go into some type of to-go container. Especially at the beginning, when in-store dining was gone, people think, what can I get to go? Pizza is kind of at the top of the list there.”

Once the Five Points restaurant reopened, no more than 48 guests were allowed in the dining room, where signs reminding customers to wear masks and stay at their tables were visible. Bouncers added crowd-control duties to ID-checking responsibilities as the Glynns strived for a more responsible approach than some less-vigilant Five Points establishments whose packed parking lots have made recent headlines.

“Doing a large brand awareness for our 30th, we did not want to have an image that would tarnish our positive message,” Kelly said. “We put a sign at the door immediately of what our capacity is, and if people are standing in line, they need to be courteous to our neighbors. They’re not current customers until they are actually up the stairs.

“When school came back, it was an immediate challenge. We did have quite a few instances where we had to tell people that they could not come back. It was struggle until they kind of realized this is how I have to behave here. … It’s weeded out those that really don’t care about the regulations. It’s been more positive than we thought it was going to be going into it.”

Even with restaurant restrictions now eased, the Glynns’ approach remains cautious. Football fans still have “cheer quick and get back to your spot,” Brian said, while social distancing guidelines mean shoulder-to-shoulder crowds are still a long ways off.

“If we’re going to follow what we’re supposed to do and what it is being suggested we should do, we won’t get to full capacity,” he said. “We’re in it for the long haul. We’ve always tried to be responsible business owners, and to show our staff, yeah, we can make more money, but it’s not the right thing to do. We try to build the trust of the people who do come in here.”

Such messaging is in line with a philosophy that has been as consistent as the Glynns’ pepperoni pizza. Through an emphasis on community philanthropy, the Village Idiot is also celebrating surpassing $100,000 in giving to local nonprofits.

During the pandemic, customers can contribute $10 to cover the cost of two pizzas delivered to front-line workers. Next month, the Village Idiot will again help raise money for the March of Dimes with Pizza for Preemies, a fundraiser to help recognize Prematurity Awareness Month and commemorate the Glynns’ own experience with their twins, now healthy three-year-olds, who were born at just 28 weeks in 2017.

It’s a welcome obligation, the Glynns said, to support a community that has helped them weather perhaps the most challenging of the Village Idiot’s 30 years.

“We feel confident that we will come out of this strong, and stronger, (and) that’s thanks to the community that has been supporting us for six months,” Kelly said. “I think we’ve learned a lot and it’ll make us a better business.

“I have felt a sense of calm and confidence over the last six months. Yes, there have been days that we’ve had to really kind of figure what the next step was going to be, (but) there was no choice. And that’s just what we’ve done.”

The couple looks forward to creating more positive memories, such as cheering the national championships won by USC’s women’s basketball and baseball teams and the fun of being the middle of Five Points’ annual St. Patrick’s Day party. And though the pattern of opening a new location every six years is “absolutely not” going to continue, Brian said, the Glynns and their restaurants aren’t going anywhere.

“ — Kelly will still be telling me to vacuum out my car because there’s flour all over it,” Brian finished the sentence. “I’m covered in flour every day. …  In any business, especially the restaurant business, you’re going to have challenges, big challenges, that if not handled correctly can close you down. This was the biggest, but through the years, having gotten over a lot of obstacles, you just know ‘OK, we can do this. We can figure it out.’ ”