With guns on the rise, TSA reminds travelers about travel rules 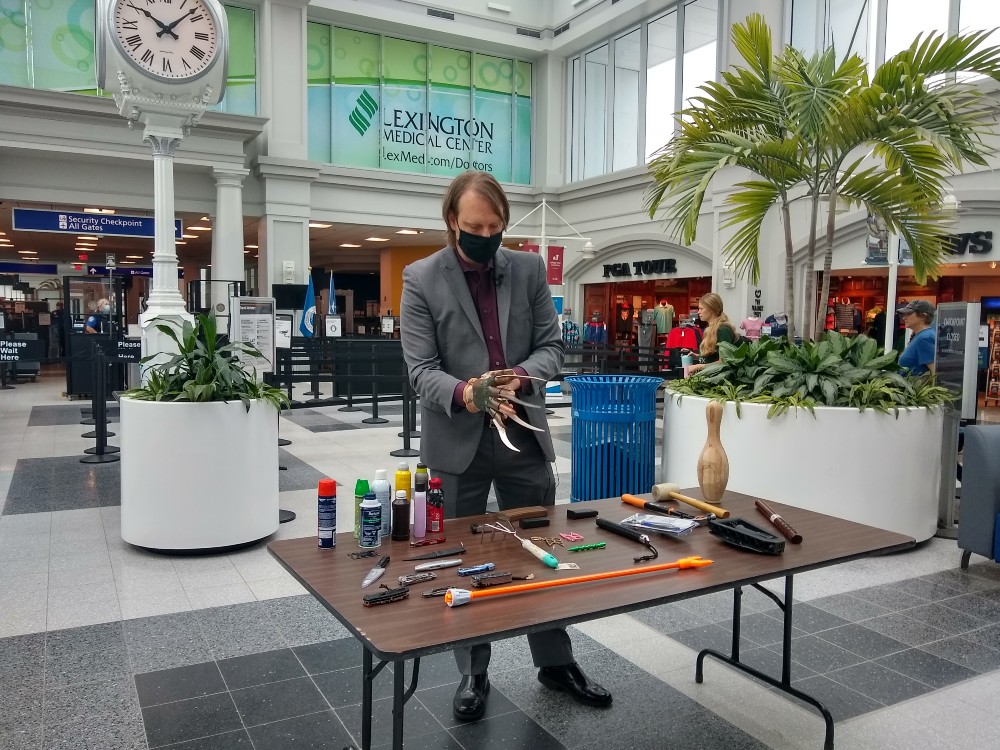 The Transportation Security Administration has some advice for travelers as Halloween approaches — leave the Freddy Krueger gloves out of your carry-on bags.

A homemade glove with blades for fingers, like the one worn by Kreuger of 1980s horror movie fame, was one of the items on display at Columbia Metropolitan Airport Tuesday as regional TSA officials held an information session to remind travelers what not to pack in carry-on bags.

The glove — part of a passenger’s homemade costume — was by far the strangest item on display, followed by a bright orange cattle prod.

Other items prohibited from carry-ons include sharp items like scissors, knives and certain tools, self-defense items such as pepper spray and Mace, and anything that could be used as a bludgeon, such as a billy club. The display included a bowling pin, which under TSA guidelines could also qualify under the bludgeon category.

Liquids, gels and aerosols are by far some of the most common items that make it into carry-ons by mistake, said Mark Howell, regional spokesperson for the Transportation Security Administration. He reminds travelers to follow the “3-1-1 Rule” — travel-sized containers (3.4 ounces or less) of these items packed in a quart-sized resealable bag are allowed in a carry-on, while larger sized liquids and gels should go in checked bags.

While pocketknives and wrong-size liquids are an ongoing problem, TSA officials are especially concerned with the number of passengers that still are trying to go through security with firearms in their carry-ons.

“We’ve got a rising number of firearms being discovered in carry-ons,” said David McMahon, federal security director for South Carolina.

Of the six airports with TSA screening in South Carolina, the largest number of guns was found at Greenville-Spartanburg International Airport, McMahon said.

McMahon is asking travelers to be more aware of what they are carrying with them.

“The main response we get from people when a gun is discovered is ‘I forgot,’” he said. “A lot of travelers get anxious in planning for a trip and don’t fully think through what they have in their bags. That’s why we ask people to empty out a bag they’re going to be taking on the plane with them, especially if it’s one they carry with them often or take somewhere like the shooting range, and then pack it again.”

TSA regulations require firearms to be secured in checked baggage.

Some items which are potentially flammable, like lithium batteries and e-cigarettes, should go in carry-ons rather than in checked baggage, Howell said.

McMahon reminds travelers that as more and more people return to traveling after the pandemic, any prohibited item in a carry-on is going to slow down the line at a security checkpoint.  Firearms will especially tie things up because if one is found in a carry-on, that entire screening lane shuts down, he said.

“We really need to get people with firearms to think about what’s in their bag, even if it means taking a few extra minutes to check and re-check that bag,” McMahon said. “We have to keep safety and security of all of our passengers in mind.”