Rubber meets the road for Be Pro Be Proud in S.C. 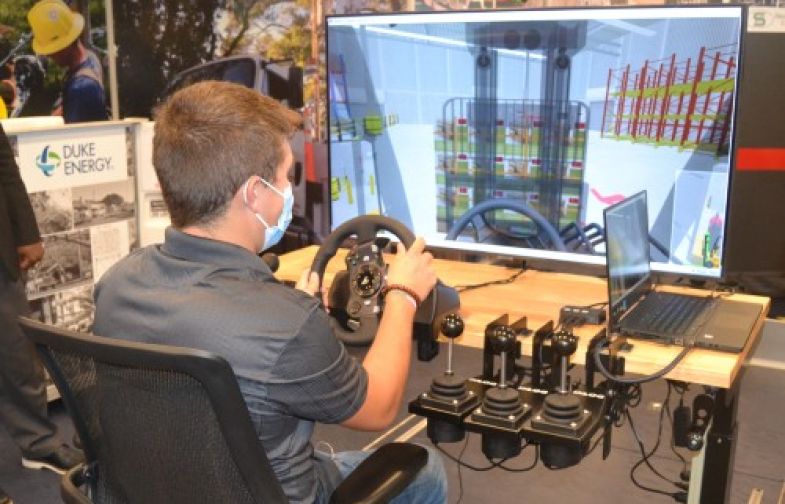 The custom-built Be Pro Be Proud 18-wheeler features state-of-the-art gaming simulation of skilled trades, such as forklift operators. (Photo/Melinda Waldrop) 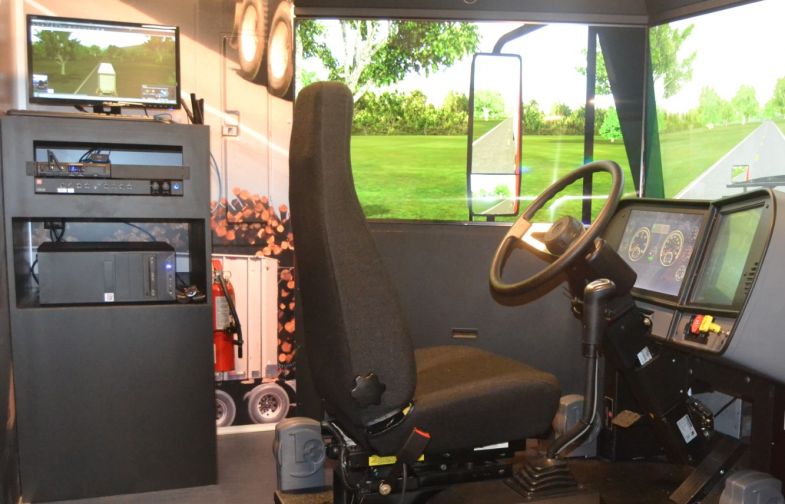 Visitors to the custom-built, 53-foot Be Pro Be Proud 18-wheeler can take a turn behind the wheel of a big rig. (Photo/Melinda Waldrop) 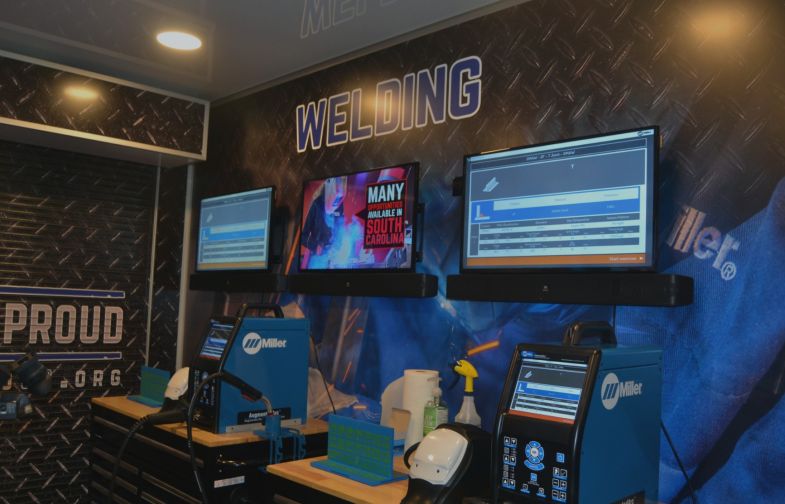 The Be Pro Be Proud workforce development program aims to attract students to skilled professions including welding. (Photo/Melinda Waldrop) 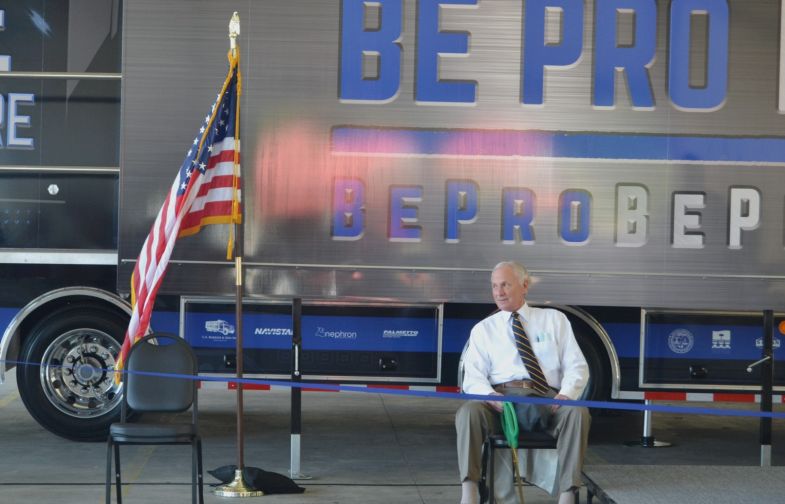 S.C. Gov. Henry McMaster waits to cut a ceremonial ribbon at the launch of the Be Pro Be Proud workforce development program. (Photo/Melinda Waldrop) 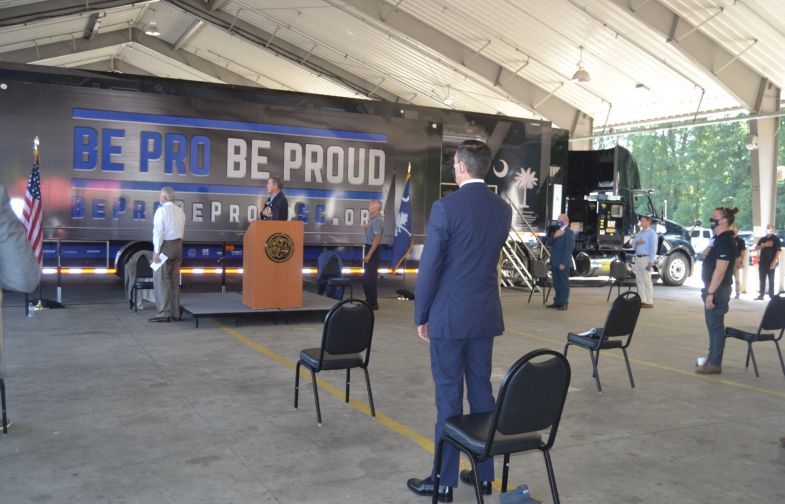 Attendees at the launch of the Be Pro Be Proud program recite the Pledge of Allegiance. (Photo/Melinda Waldrop)

Todd, president and CEO of the S.C. Trucking Association, was an early champion of the Be Pro Be Proud workforce development program pioneered in Arkansas in 2016, lobbying state legislators and private businesses to support the initiative that introduces middle and high school students to skilled trades such as construction, welding and electrical work.

Todd’s efforts, and those of others with a rooting interest in the program, paid off as Be Pro Be Proud launched in the Palmetto State. State dignitaries gathered in front of a custom-built, 53-foot 18-wheeler outfitted with state-of-the-art gaming simulations of in-demand jobs at the S.C. State Farmers Market to share their hopes about how the program will bolster the state’s workforce pipeline.

“It’s an exciting day just to show what the private sector working with the public sector and all the stakeholder agencies can do together,” Todd said after presiding over a ceremony which included S.C. Gov. Henry McMaster, S.C. Chamber of Commerce President Ted Pitts and representatives from the state’s home building, forestry and construction industries. “Now we just want to get it out there and see if we can help show some people what kind of future they might have.”

S.C. companies are also invested in those futures. More than 82% of S.C. employers in skilled professions report a moderate or serious shortage in workers, according to a fact sheet from BeProBeProudSC.org, and an estimated 2 million jobs will be left unfilled by 2025 because of an aging workforce with more than 24% of current workers at or near retirement age.

Be Pro Be Proud aims to address that workface gap by educating students about what those trades have to offer, including potentially lucrative salaries. According to online job site ZipRecruiter’s analysis of employment listings, construction workers in S.C. earn an average of $32,582 annually but can make up to $60,000. Journeyman electricians average $26 an hour, while truck drivers make an average of $48,324 a year and can earn nearly $70,000.

“These are good careers,” Wayne Moore, president of the Home Builders Association of S.C., told the crowd. “This is how you make your living. It’s not just a paycheck.”

A walk through the big rig, manufactured by N.C.-based specialty vehicle company Spevco, provides a hands-on, full-color glimpse at those careers. Students can practice the precision needed to drive a forklift, operate heavy equipment at the Caterpillar simulator, or take a spin in the driver’s seat of an 18-wheeler as screens flash facts about job availability and pay.

In April 2017, the original Arkansas truck made an appearance at the S.C. Statehouse as supporters lauded its benefits for South Carolina. But $950,000 earmarked for the program was cut from S.C.’s state budget that year. Last year, the state appropriated about $600,000 to the S.C. Department of Employment and Workforce to administer the program, and the private sector pledged to raise $2 million.

Andrew Parker is the executive director of the Associated Industries of Arkansas Foundation Inc., which runs that state’s Be Pro Be Proud program. He was there for the truck’s 2017 appearance in S.C. and on hand for the unveiling of South Carolina’s version.

“The same folks that are here today were there. This has been a long time coming, but it’s exceptional,” Parker said. “We created it thinking it could be a national effort, but you never really know. You don’t know if anybody’s going to bite. South Carolina bit and held on to it.”

Of the 98,000 students who have toured the truck since its launch, Parker said 20,000 have expressed interest in one of the featured careers. At the end of 2019, he said the program had 400 pending request for visits.

While the COVID-19 pandemic has limited the number of visitors who can walk through the truck at one time and necessitated increased cleaning measures, he said the big rig is still on the road three to four days out of each school week, rolling into venues which have booked a spot.

“When the two-year college presidents are saying this is affecting our enrollment numbers, and teachers are saying that kid is not going to drop out because of this experience, and the kid that’s on the other end of spectrum is saying I now have a way to figure out how to pay for med school … it’s terrific,” he said.

The South Carolina truck is already scheduled for 33 appearances for the 2020-21 school year, according to BeProudBeProudSC.org. The truck is projected to engage 50,000 students during a 48-week tour in its first year, and the program’s goal is to produce 100,000 new skilled workers in five years.

“Without this work, without these skills, nothing else in the state will work,” McMaster said. “Everything depends on these skills, this education, this training.”