When D. Nichole Davis decided to go to law school, the firm where she worked as a paralegal rallied around her, handwriting letters of support.

Both women persevered through individual challenges to establish successful careers, and both recently received the University of South Carolina School of Law’s highest honor.

Davis received a 2018 Compleat Lawyer silver award, while Leverette received platinum recognition. The awards, established in 1992, are given in three categories: platinum (31 years or more in practice), gold (16 to 30 years) and silver (15 years or less).

Recipients are nominated by members of the South Carolina Bar or the public and are chosen by a committee that includes the chief justice of the S.C. Supreme Court, the chief judge of the state Court of Appeals and the president of the S.C. Bar.

“To me, that’s one of the highest awards anybody can get, because it involves your brethren,” said Leverette, 98, who, after becoming the third woman to graduate from USC’s law school in 1943, worked for a quarter-century as the first woman on its faculty.

Davis, 40, a 2011 USC law school graduate who is the risk management director at the South Carolina Bar, was equally excited — once she realized why dean Robert Wilcox was calling her.

“I was like, ‘I know I don’t owe the law school any money,’ ” she said. “But then he told me I won the award. Of course, you’re talking to the dean of your law school, so you want to maintain professionalism, but as soon as I hung up the phone, I screamed and ran up the hall to our financial director. I was like: ‘Guess what? Guess what?’ I was elated.”

While Davis didn’t have to deal with a dean who questioned her presence in law school, she had obstacles of her own to overcome. After having her son, Michael, at 20, Davis attended night classes at South University while working the graveyard shift at Kroger, where she met her husband. When a proposed change in hours at the store would have conflicted with her class schedule, Davis quit her job. 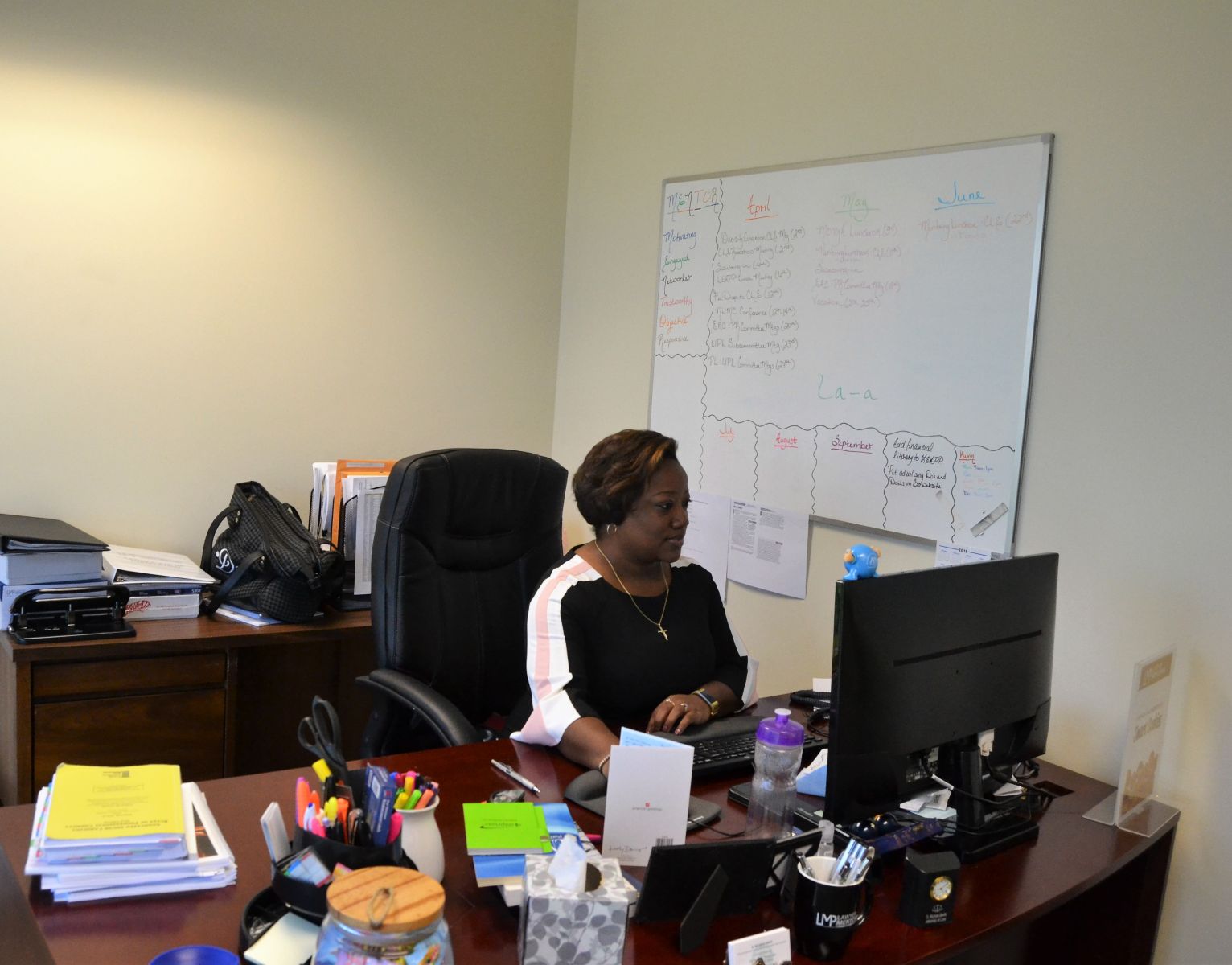 After three years in that job, Davis moved on to a paralegal position at McWhirter, Bellinger & Associates. Two years into that, she mentioned the idea that had been bouncing around the back of her brain: She thought she might want to go to law school.

Originally wait-listed at USC, Davis enrolled in law school in Charlotte, though “Pat (McWhirter) was not happy about that,” she said. “(He) started having all of the attorneys in the office handwrite letters of support – ‘She’s smart, she’s this, she’s that, you really need to let her in.’ ”

Driving home one weekend on Interstate 77, Davis got a call from USC and was soon attending law school in her native Columbia.

“Law school is a different kind of beast,” she said. “I remember when I got those first-semester grades. I was like, ‘What is this? A C! I don’t do C’s!’ I actually considered dropping out, (but) I learned to cope.

“The most difficult part of it, for me, was the fact that I didn’t have people in my immediate circle as far as family that had gone after that level of education, so I did feel like I was kind of at a disadvantage there. But being where I am now, I think that makes it even more awesome.”

Named the S.C. Young Lawyer of the Year in 2016, Davis is no longer in rarefied educational air in her family. Inspired by her example, a cousin became a nurse, and her father, after returning to college to get his degree, is now in a doctoral program for theology.

“I have a lot of younger cousins who I take to the (USC) campus, and they want to be Gamecocks,” she said. “It’s pretty cool to see that happen.”

Davis’ son, now 20, is in his second year at Midlands Tech and contemplating a medical career. And Davis still enjoys the support of the people who first believed in her.

“The McWhirters have been really good to me for a long time. They check on me on a regular basis,” she said. “It’s so cool to have what I feel is an extended family that still feels invested in my career and me as a person. I will always love them for that.”

Leverette, who traces her interest in law to following around her magistrate dad as a child, trod a slightly different path.

“The dean did not want me there. He did not want women in law school,” she said. “He was a very sedate gentleman, a good fellow, but he would ask me every semester: ‘Ms. Leverette, are you still with us?’ I’d say ‘Yes, I am.’ I wanted to say, ‘I plan to stay with you, too,’ but I didn’t.” 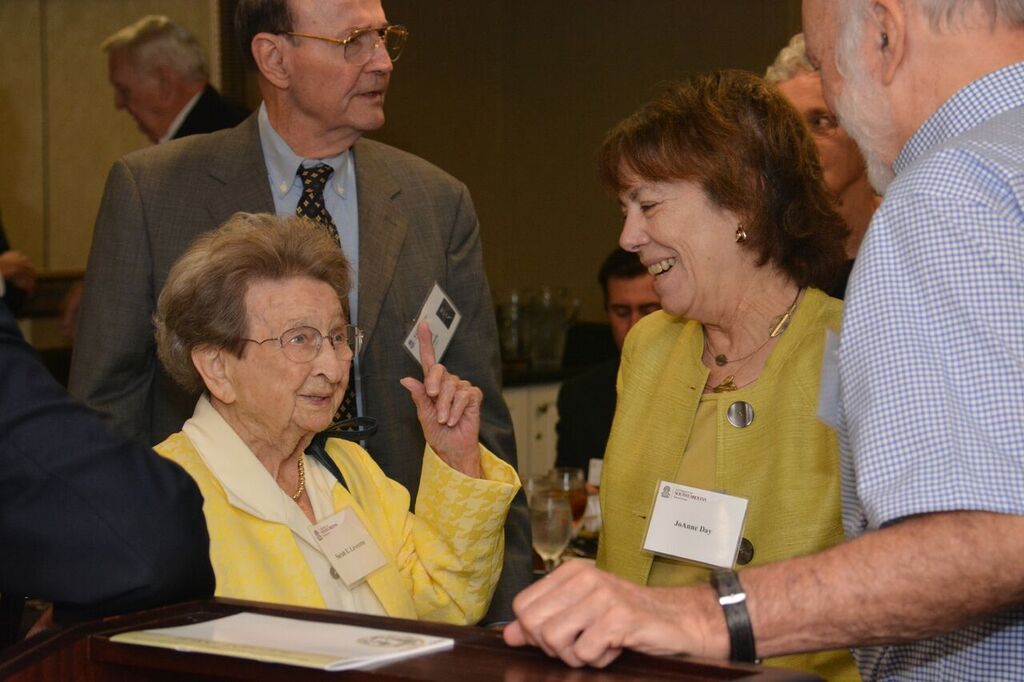 Her male classmates were gentlemanly, Leverette said, though she did take them aback once when she popped up unannounced at a fraternity house study session.

“I understood they were having a study group, so I went charging over there,” Leverette said. “It was in the summertime, and they were all sitting around in their shorts. They weren’t expecting me to appear.”

Leverette doesn’t remember the dean having much to say when she graduated, thought she was told to be sure to wear a black dress to her swearing-in ceremony.

To her surprise, she was quickly hired into a practice, but that job proved short-lived.

“They invited me in, but I think they invited me for something other than law,” she said. “They told me one day, ‘Now, Sarah, the office has got to be very clean and neat. We’re looking for a new member to come in.’ I told them I didn’t go to law school to become a service person and I left.”

Leverette ended up back at USC, where she worked as a law librarian and taught legal research and writing for 25 years. She taught future influential figures such as I.S. Leevy Johnson, the first African-American to serve as president of the S.C. Bar, and Jean Toal, the first female justice of the S.C. Supreme Court.

Leverette also served as commissioner and chair of the S.C. Industrial Commission (now the Workers Compensation Commission) and led the League of Women Voters, which she joined in 1950, as president from 1958 to 1961, spearheading the fight to allow women to serve on state juries.

In 2017, she received the Rev. Sen. Clementa C. Pinckney Award for Justice from the S.C. Appleseed Legal Justice Center.

Bored in retirement, Leverette became a real estate agent with Russell and Jeffcoat, now Coldwell Banker. She still maintains an active license and continues to champion the profession to which she devoted decades.

“I was talking to somebody in the office, and he said nobody trusts a lawyer,” Leverette said. “I told him ‘OK, go out here and get in your car and go down the street and somebody runs into you. Are you going to go to court by yourself?’ …  Law is the foundation for everything. Without it, there would be no other professions.”

Recalcitrant deans and misguided employers aside, Leverette didn’t see her law school attendance as anything to kick up a fuss about.

“I didn’t think I was doing anything special. I just did what I wanted to do,” she said. “I wanted to go to law school and that’s what I tried to do. I don’t think I’m any trailblazer as far as courage was concerned.”

Davis would beg to differ.

“She is, though. She is, and she’s feisty,” Davis said. “I love interacting with her. She knows so much and she’s been through so much, yet she’s so graceful. Sometimes you just wish you could peek inside of her head and read her thoughts. She’s awesome. I’m definitely a fan, and I definitely look up to her.”

This article first appeared in the April 23 print edition of the Columbia Regional Business Report.