Palmetto State Armory has grown from an ammunition mail-order operation that founder Jamin McCallum operated as a sideline business from his Blythewood garage to a manufacturer and online seller of firearms and firearms parts.

The Midlands company is on track to record $250 million in sales this year with the goal — as McCallum puts it — to “make shooting affordable, make it fun, and create the best design.” 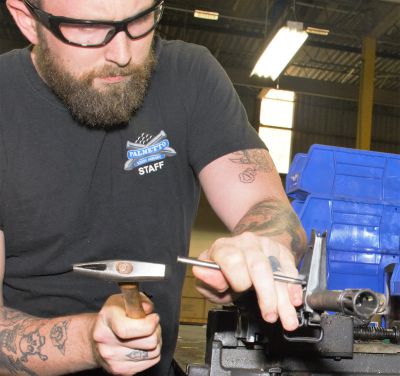 The company has two retail stores in Columbia, and one each in Greenville, Ridgeland and Mount Pleasant. On Sept. 24, PSA completed a multi-million-dollar expansion into the Charleston region with the grand opening of a 35,000-square-foot store in Summerville that once was a Kmart.

The stores sell a range of hunting gear plus coolers, fishing rods and reels, lures, sunglasses, clothing, sport cameras and knives as well as guns, ammunition and optics. Some of the stores, like PSA’s outlet on Fernandina Road, provide indoor shooting ranges for instruction and practice. The company’s efforts to promote the sport led to the acquisition of an outdoor range off Charleston Highway in Lexington County.

In 2014, the privately held company announced plans to invest $4.2 million and renovate and expand a 168,000-square-foot manufacturing facility in West Columbia. At the time, PSA had about 230 employees. Today, it has about 500.

The company has experienced average annual growth of 20%. Most of the company’s sales are online and more than half of its total sales come from its branded products.

At the West Columbia operation, PSA has a 25,000-square-foot distribution facility, where about 2,500 to 3,000 packages are shipped daily, Ruonala said.

McCallum attributes the company’s success to a strong workforce and a loyal customer base that believes it’s getting a good deal. “The reason why we are where we’re at is because of customers and our employees,” McCallum said.

About 25% of the company’s workforce are former members of the U.S. military or currently serve in the S.C. National Guard or Reserves. Hiring military veterans is a plus because they have shared experiences, similar work ethic and mutual relationships.

Before he entered the firearms business, McCallum served two deployments to Iraq as an officer in a S.C. Army National Guard engineer unit and suffered a traumatic brain injury.

When he was back home, McCallum decided to say good-bye to his career as a certified public accountant and enter the firearms business.

Initially, McCallum said, he sold ammunition online. But a vendor’s mistaken shipment sparked PSA’s transition to an ecommerce retailer of firearms and becoming a manufacturer of rifles and pistols.

What happened, McCallum said, is a supplier mistakenly shipped him a box of 25 buffer tubes for an AR-15 semi-automatic military assault rifle.

McCallum offered to return the buffer tubes but the vendor said it would cost too much and it was OK to keep them. So, it was decided to see if they could sell the buffer tubes online. “They just evaporated,” McCallum said of the quick sale.

That experience triggered an idea to try and sell more rifle parts, and soon McCallum and his staff realized that they were handling all the parts to make a rifle except the barrels and receivers.

In 2009, FN Manufacturing, located in Northeast Columbia, had its contract to make rifles for the U.S. military cut back. PSA worked out a deal to acquire barrels and receivers from FN and soon began assembling AR-15 rifles.

In 2014, the most recent year for which figures were available, PSA manufactured about 4,800 rifles and about 77,000 “miscellaneous firearms” or “receivers,” the serial numbered piece around which a gun is built, according to a report and agent at the U.S. Bureau of Alcohol, Tobacco, Firearms and Explosives.

As it has ramped up production, PSA now produces about 750 units — rifles and pistols — per day, Ruonala said.

Because of his commercial real estate experience, Wilson finds the retail and manufacturing locations and LaRocque handles the construction details, Ruonala said.

Being in the firearms business, PSA has dealt with controversy. However, the company hasn’t used a stealth approach to market its products.

Annual Christmas billboard ads have shown a pistol with a suppressor and the words “Silent Night,” or an open revolver’s bullets with the words “Five Golden Rings.” Another ad read “Jingle Bells, Shotgun Shells.”

“It was unbelievable,” Ruonala said. “There were people out there who said everything from ‘Guns are bad and they kill people’ to ‘How could they do this with a Christmas theme?’ ... Gun fans said, ‘This is no different from Macy’s sponsoring the (Christmas) parade.’”

“Controversy absolutely brings our business to the forefront, especially in states like South Carolina, and really across the country,” Ruonala said. “There’s a very pro-firearms, when handled responsibly and safely, movement across the country.”

South Carolina residents hold almost 288,000 current valid concealed weapons permits, according to the S.C. Law Enforcement Division. Applications for first-time concealed weapons permits have gone up in the last five years, from about 28,000 in 2010 to about 33,000 in 2015, according to SLED. More than 31,000 new permit applications had been submitted by mid-August this year, SLED said.

Gun sales typically go up during or after an election year.

“Right now with the political campaign, our ads are simply patriotic and expressing the (Second Amendment) rights,” Ruonala said. “We don’t think because we are a topic of concern in this election that we have the right to tell people who we think they should vote for.”

McCallum said that roughly 80% of PSA’s business is to customers who appreciate innovation and love the sport of shooting. The other 20% is what he calls fear-buying, which happens when people fear laws to restrict gun ownership are on the political horizon.

Added McCallum, “Our goal is to have 100% of our business driven by innovation and people’s love of the sport. We want to make the shooting sports fun and enjoyable and get it away from politics. I want Democrats and Republicans to shoot. The more people who do it, the less taboo it is.”

Harriet McLeod contributed to this report.

I have been buying from Palmetto ever since 2014. I have purchased quite a few rifles and receivers from them over the years. My experience with them has been nothing less than excellent. And it only gets better with each year. It's not to say there haven't been mistakes. Once a shipment was lost , and a few times I received a defective item, but customer service was always there and extremely pleasant to deal with and it was always resolved quickly. The only time I saw a delay from customer service was during the holiday season and that was many years ago. To me they are one of the supplies of quality goods at a great price.

Agree with last two posts. Customer service is horrible. They sent me the wrong package, but won't ship the item I paid for, until they receive the items they sent me due to their warehouse's incompetence.

Worst customer service I have ever encountered.

I have purchased their products, and the quality is first rate and prices are amazingly affordable. If this company ever goes public, I'm going to recommend it to everyone I know, because their basic marketing plan is an absolute winner.