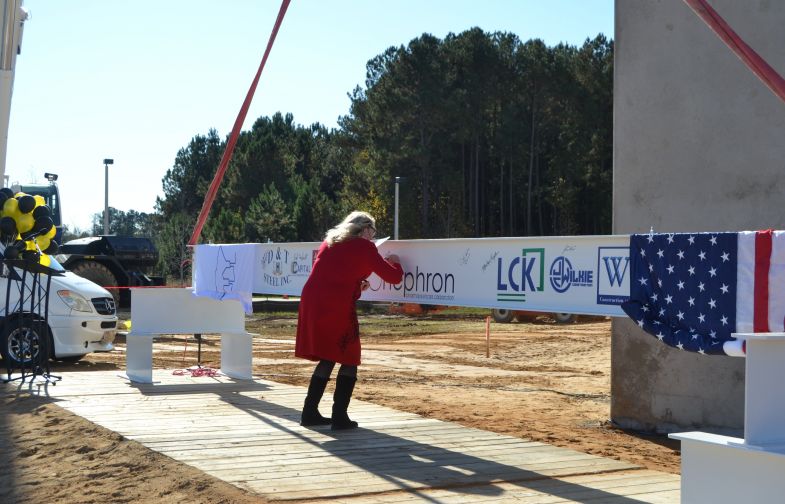 Nephron owner and CEO Lou Kennedy signs the final beam of a section of the company's $215.8 million expansion during a ceremony Tuesday. (Photo/Melinda Waldrop) 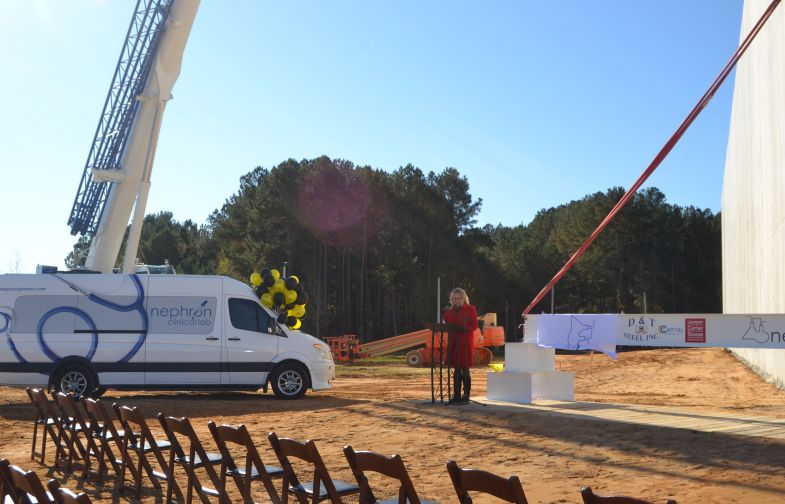 Nephron owner and CEO Lou Kennedy prepares to address a crowd assembled for a beam-raising ceremony on Tuesday. (Photo/Melinda Waldrop) 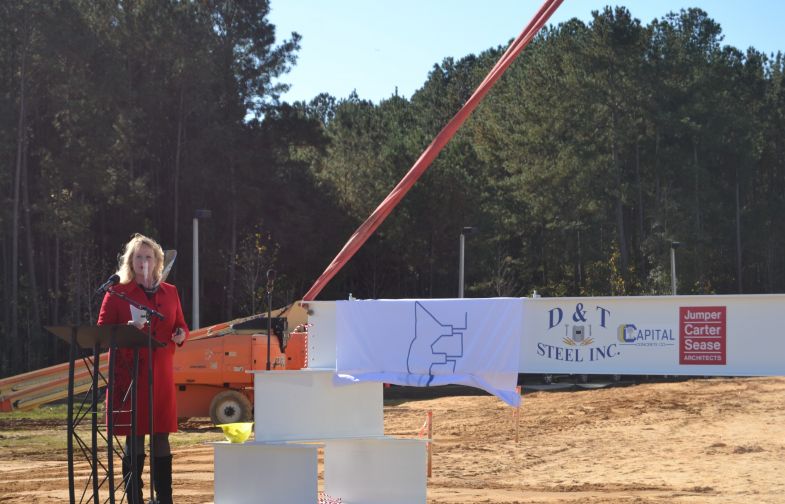 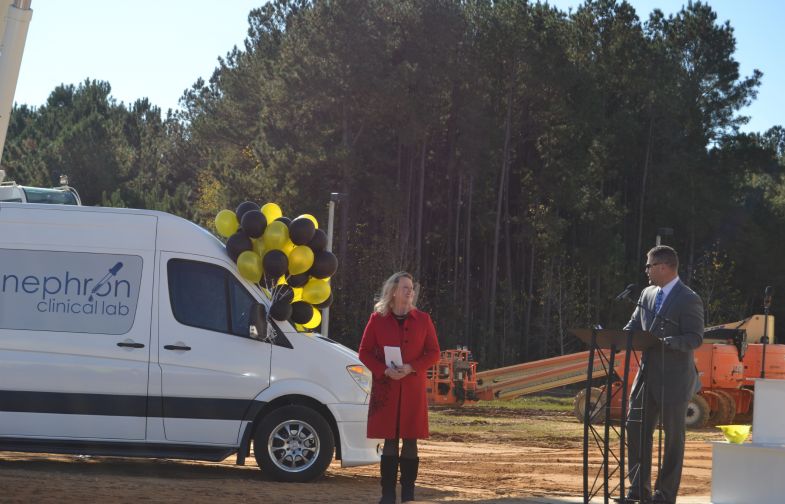 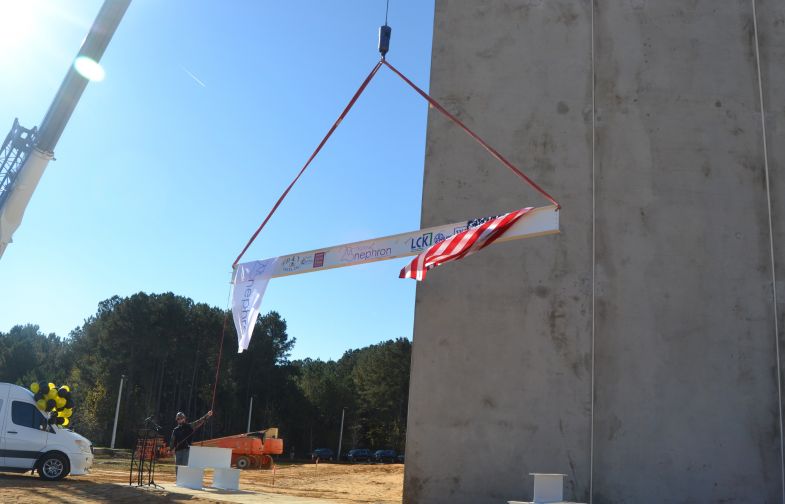 The final beam for a section of Nephron's $215.8 million expansion is raised into the air. (Photo/Melinda Waldrop) 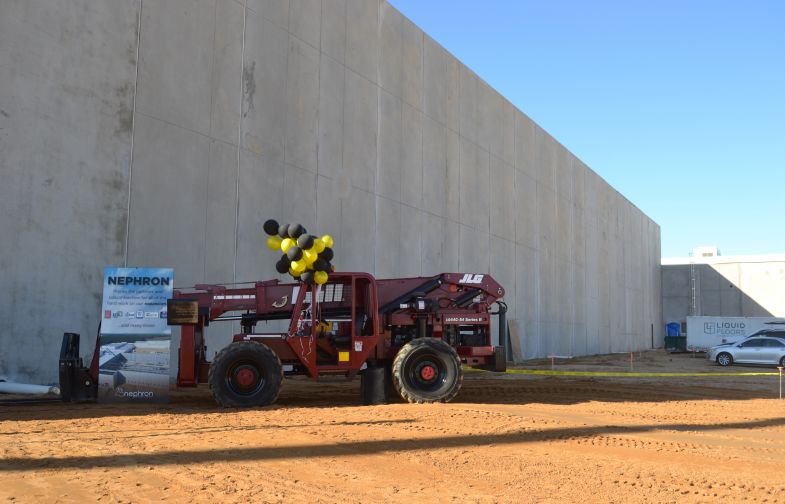 A banner on a piece of construction equipment thanks supporters for helping spur Nephron's $215.8 million expansion. (Photo/Melinda Waldrop) 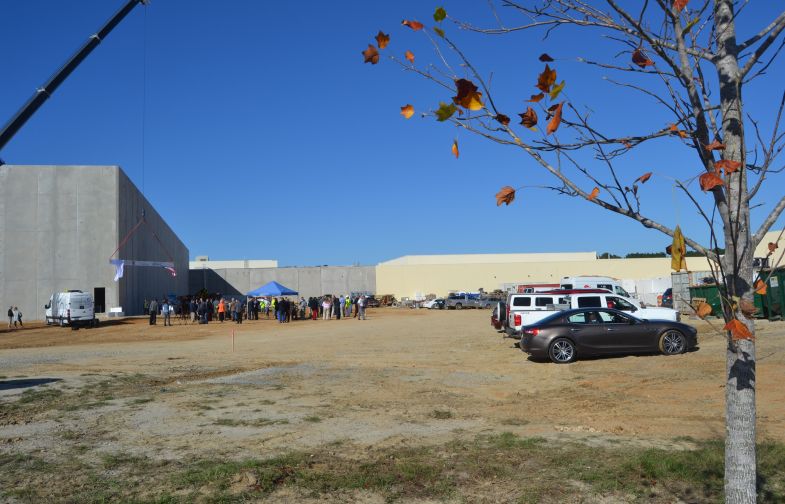 People mill about about after a beam-raising ceremony at Nephron's Saxe-Gotha Industrial Park campus on Tuesday. (Photo/Melinda Waldrop)

Part of the expansion is a 110,000-square-foot vaccine production, chemotherapy and antibiotic wing that Kennedy, Nephron owner and CEO, expects to be operational around March 2021. She said Nephron is actively looking for a vaccine production partner to provide the ammunition for the pre-filled sterile syringes that make up the booming 503B Outsourcing Facility arm of the company.

“It’s a Chamber of Commerce day,” Kennedy said after signing the final beam of the 240,000-square-foot Kennedy Innovation Center’s steel skeleton on a crisp, clear morning. “This marks a milestone in 2020. This is good news. This is giving us the space to continue to grow.”

The letter, sent to Nephron owner and CEO Lou Kennedy, referenced emails sent by Kennedy and a Nephron sales representative on July 7 and July 14 representing budesonide as a treatment for COVID-19. In the letter, the FDA’s Office of Prescription Drug Promotion said the drug is not approved for that use and called the emails “false or misleading” for presenting the drug’s benefits without including any risk information.

Nephron acknowledged receipt of the letter on Sept. 22.

“Nephron recognizes the importance of the issues raised by OPDP’s letter and is working diligently with the FDA on a comprehensive plan of action to ensure truthful and non-misleading communications regarding Budesonide,” the company said in a statement sent to the Columbia Regional Business Report. “Among other things, this includes a corrective communication that will address the approved use of Budesonide and associated risks.”

The West-Columbia based manufacturer of generic respiratory products received FDA approval to run all 12 of its production lines in response to increased demand for its inhalation solutions during the pandemic.

“Our products are not approved for the treatment of COVID-19 or its symptoms; however, in response to demands created by the pandemic, we have worked with the FDA to develop and obtain approval of additional prescription product lines, began manufacturing hand sanitizer, and recently opened a CLIA-certified diagnostics lab,” the statement said. “We take our regulatory obligations and commitment to public health seriously, and are proud to commit ourselves to these endeavors.”

Nephron develops and produces generic inhalation solutions and suspension products, including those used to treat respiratory distress symptoms. During the pandemic, the company has received Food and Drug Administration approval to develop and obtain additional prescription product lines.

Nephron’s outsourcing division produces syringes and IV bags for hospitals across the country in an effort to alleviate drug shortages — a function made all the more vital during the pandemic.

“We are proud to have Nephron Pharmaceuticals in South Carolina,” S.C. Gov. Henry McMaster said when the expansion was announced in July. “Since coming here, they have become an integral part of the community, and recently have been vital in the fight against COVID-19.”

On Tuesday, Kennedy was joined by local officials, including Lexington County Administrator Joe Mergo and representatives of the companies involved in the expansion’s construction and design, in signing the significant beam.

“As we get to leave our mark on this beam, what’s really important is the mark that Nephron continues to leave on our community,” Mergo said.

Carving that mark is a nonstop job that begins each day before 7 a.m. as Kennedy fields phone calls between sips of Chick-Fil-A tea. In an interview last month with the Columbia Regional Business Report, Kennedy said she is still learning how to anticipate ever-changing health care needs.

“The older part of my business, I keep lots of raw material. I keep it stocked. I know exactly what’s in demand every month of every year, now and forever,” Kennedy said. “This new division, the outsourcing, we didn’t know what drugs were going to be the hot 30 on the COVID list. All of a sudden something that I made this much of became this much. … There’s no real forecast. There’s no last month’s history when things like this are going on. All bets are off. You’re trying to stay ahead of it.

“We’ve adjusted and we think the sweet spot is 45 days of inventory for raw materials, but what if we have another spike like we saw in March? We just have to be savvy and watch carefully and don’t take our eyes off the ball.”

Nephron receives electronic orders 24/7. Tractor-trailers loaded with product for customers which include some of the country’s largest drug wholesalers pull of out the complex three times a day.

Demand has subsided from a “freakish” March that saw a 141% increase in Nephron’s monthly production of inhalation solutions from 80 million doses shipped to 193 million, Kennedy said. But the company is still operating all 12 production lines while adding new packaging lines and quality efficiency equipment.

“It is like a startup, because you’re adding a new drug every few weeks. You don’t know what the needs are going to be,” Kennedy said. “You’ve got to figure out how to get it made, how many to make. … It’s really hard to predict and get it right. Production scheduling here is Ph.D. work.”

The expansion, which is expected to create 380 jobs, will help strengthen Nephron’s vertical integration, allowing the company to produce more things it needs in-house as supply chain disruptions have exposed some vulnerabilities. At the height of the pandemic in March and April, Kennedy said, Nephron needed a component of active pharmaceutical ingredient only available in India.

“The plants were all shut down and nothing’s going between us and India,” Kennedy said. “Our UPS guy called India UPS, convinced the lead India guy to drive to the plant. The plant manager met him there, unlocked the doors, got our big blue drum of powder, gave it to the UPS guy and then they got it to us so we wouldn’t be without raw materials.”

Nephron has also had to shore up its procurement practices after running perilously low on personal protective equipment for its employees.

“I have been working for the last three or four months to build up new people and get them trained for procurement so that we are adding an extra layer,” Kennedy said. “I’ve had technology put into place to better assist me for when I’ve hit the watermark that’s too dangerous and to adjust those watermark levels.”

The Kennedy Innovation Center will house two businesses operated by Kennedy and her husband, Bill Kennedy, including a company that makes the hand-held nebulizers Nephron produces, in 80,000 square feet. The remaining 160,000 square feet will be marketed to state and county commerce departments for startup ideas, Kennedy said.

“It would be my personal dream for whoever goes in there to be PPE that I could benefit from and/or other health care or life sciences where we could say, ‘Oh, I’ve already got a lab that can do that. Can we help …?’ You know, build an ecosystem,” Kennedy said. “It’s like when I couldn’t get enough labels on time, we just set up our own print shop here. … I think every month that goes by with COVID still lingering, you realize, I hate to be dependent on X, Y, and Z. Could I bring that in-house? We’re trying to be even more vertically integrated so we’re not dependent on these outside partners as much.”

Kennedy is not revealing any details about the other business to be housed in the innovation center until next month but said the idea has been percolating for nearly a year.

“This COVID made everything come into laser focus. We cannot be dependent on the world for things that we need in our manufacturing process,” she said.

Nephron invested $313 million to move its headquarters from Florida to West Columbia in 2016. The company said more than 1,800 full- and part-time jobs have been created since that move as Nephron’s makeup has changed.

“We’re a much more diverse company than when we moved here,” said Kennedy, a native of Lexington. “We made respiratory meds only. We’ve added three new generics since then. We’ve added 60-some-odd products for outsourcing. Back then, we didn’t do IV bags. Now we do.

“This is such a different company than what I came to South Carolina to do originally. I’m proud of it.”