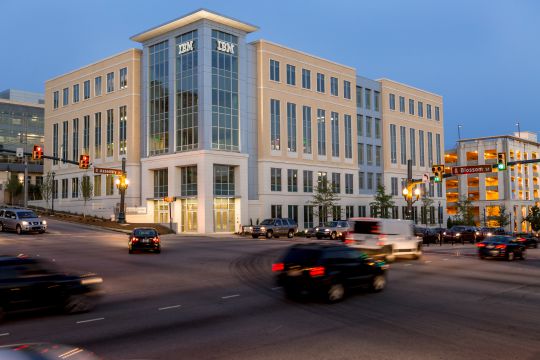 The five-story, 110,000-square-foot Class A office building at the corner of Assembly and Blossom streets was opened in April. Headquartered in Columbia, Electric Guard Dog, is considered the market leader in electric security fences and perimeter security in the country.

“We chose to move to get the space we needed to accommodate the major increase in support staff we’ve made,” said Jack DeMao, CEO of Electric Guard Dog. “Innovation Center has the capacity for our continued growth, and the proximity and relationship the building has with the University of South Carolina enables us to offer internships and job opportunities to students and graduates.”

DeMao added that the move to the Innovation Center “is a great strategic move for our customers, too. They will reap the benefits from increases in technology, speed and dexterity available at Electric Guard Dog in 2017 and in years to come.”

Electric Guard Dog will be located on the fifth floor of the building and is expected to move in by March, according to a press release from Holder Properties, a privately held full-service real estate developer. Rob Lapin with NAI Avant represented Electric Guard Dog in this transaction.

Electric Guard Dog was founded in 1991 by Bill Mullis, who conceived and designed the first solar-powered electric security fence. The company provides security for more than 3,600 commercial and industrial locations nationwide.

The company has been ranked as one of the top 30 security companies in the United States on the SDM 100 List since 2011. It also has been ranked on Inc. magazine’s INC 500/5000 list of fastest growing privately held companies, the last 3 years, ranked in the top 20 best-performing companies, Roaring Twenties by SC Biz News, parent of the Columbia Regional Business Report.

The company will be moving from 121 Executive Center Drive in the Congaree Building of Synergy Business Park where it has been based since 2011. Electric Guard Dog currently employs 60 people locally, and plans to double their size over the next year, according to the City of Columbia Office of Economic Development.

The Innovation Center was developed by Holder in conjunction with the University of South Carolina Development Foundation. Other downtown properties that Atlanta-based Holder has are the Main & Gervais office building, the Meridian office building, Adesso Condominiums, Aspyre Student Apartments and the 650 Lincoln Mixed-use Student Community.

Holder added the Innovation Center is 81% leased with space available on the fourth floor.