The Beach Company today announced plans to begin construction on Sola Station to complete the final phase of its CanalSide neighborhood in downtown Columbia.

Sola Station, named for the 19th-century railroad station that once connected the Port of Charleston to the state’s inland regions, will be a mixed-use community located on the edge of the The Vista neighborhood. The property is adjacent to the existing CanalSide Lofts, which was developed by the Charleston-based firm. 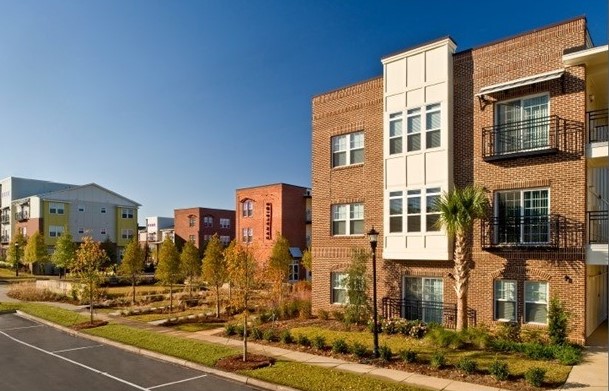 Plans for the $58 million project call for 339 multi-family rental units and 29,000 square feet of commercial space, according to a press release. An amenity package for residents will include a saltwater pool, fitness center and yoga studio, dog park and spa, bike shop, and clubroom overlooking a pool and outdoor kitchens.

Each new building will feature the same contemporary style consistent throughout the Canalside neighborhood, according to City of Columbia documents. Four of the buildings will be three stories, another will be five and a final construction will be four.

The latter is programmed with active retail and commercial office space, documents show, providing storefront and entries along the street. A restaurant is shown at the corner, and there is an opportunity for a prominent entrance and outdoor dining, the developer wrote.

Canalside took over the site that was occupied for more than a century by the Central Correctional Institution, the prison which included South Carolina’s death row until 1990. The prison closed in 2004 and the site was sold to the city of Columbia for $3.2 million.

The Canalside complex first opened in 2008 and the city-owned Three Rivers Greenway Esplande, a long public walkway along the water, was unveiled in 2009.  A second phase to the apartment complex was completed in 2013