Home on the range: Neighborhood has unusual past

Residents of a Richland County neighborhood recently received letters explaining their property is located on a World War II bombing site, but officials say they have nothing to worry about.

The Summit community, near Clemson and Hardscrabble roads, is the former Pontiac Bombing Range used during the 1940s to train the U.S. Army air forces. The range is one of 5,100 formerly used defense sites across the country.

The Army Corps of Engineers held a question-and-answer session earlier this month with neighborhood residents at Spring Valley High School. The Corps of Engineers is required to let people in the area know about the bombing range every five years. 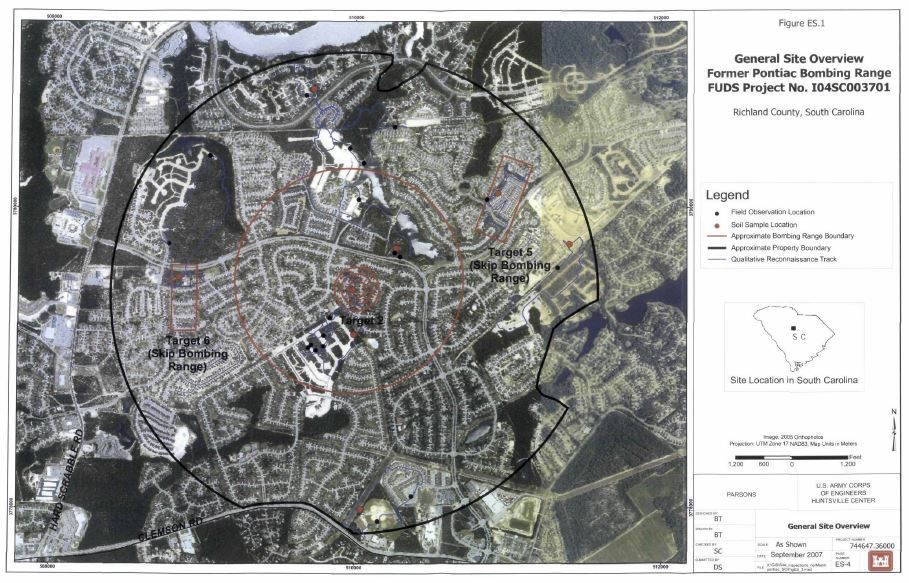 Brian Jordan with the Huntsville (Ala.) Corps of Engineers munitions center said the area was a munitions response site. The site is roughly 2,000 acres and contains three targets inside the area. The largest measures about one mile and encompasses 439 acres. The outer two are each 22 acres.

Bill Birdwell, senior public affairs specialist with the U.S. Army Corps of Engineers in Savannah, said the area once contained rural, forested land, but neighborhood development has made excavation necessary.

“It’s a heavily disturbed area,” Birdwell said. “Most of the munitions have been found and removed. In 1945 and ’46, we didn’t have a lot of good technology to find everything.”

Birdwell said the munitions had a spotting charge with black powder that was activated by something equivalent to a shotgun shell without pellets. He said the charge would emit a small explosion so pilots could see if a target was hit.

“It’s not a high-explosive bomb that would blow up a house,” Birdwell said.

The Corps of Engineers planned to send another letter later this month with specifics on each site and to hold another meeting.

“People move in and out,” Birdwell said. “It’s our responsibility to notify people and remind them. Sometimes people forget to mention the detail when selling their home. Our main purpose is to educate the community.”

Birdwell said the most common question he gets at the forums is: Am I safe?

“Safety is the main concern people have, and we address it carefully through our Three Rs program,” Birdwell said. “First, recognize. If something doesn’t look right, it probably doesn’t belong. Second, retreat. Don’t try to extract anything yourself. Lastly, report. It’s a simple 911 call and the police will rush out to your house to inspect.”

“My husband (Paul) and I knew about the bombing range because it was in the paperwork we signed when we built our house,” Jeanette Gambrell said. “But it’s always nice to have a review.”

Paul Gambrell was hoping to get more of a history lesson about the area after living in the neighborhood for the last 14 years.

“As a former military man, I was interested more in the history of the range and what types of planes were used,” Paul said. “They still gave us a lot of good information, but we knew what to do if we find something.”

Jim and Jennifer Corn also hoped to learn more about the area. They have lived in the neighborhood for 17 years, and Jim Corn said they are in the center of the main target area.

“We’ve been evacuated a couple of times,” Jim said. “A neighbor of ours found a large, fully intact sand bomb in his yard. The police cornered off the neighborhood, but the process only took a couple of hours. It wasn’t too bad.”

Jennifer Corn said she was happy to hear that everything is safe.

Summit resident Justin Martin has lived within the range for the last 20 years and said he was concerned about the information being given to newer residents.

“Some people who haven’t lived here are just now hearing about the range,” Martin said. “The meeting provided more information than I previously had. They are not doing this to raise hysteria, but rather get the right information out.”

Martin remembered a story about a plumber working in the area who came across a piece of metal and came down with a mysterious illness. It was later proven the metal was not dangerous, but Martin said selling a home in the neighborhood became difficult.

“I don’t want that type of hysteria to perpetrate again,” Martin said. “There are far worse things to be concerned about than some inert pieces of metal that may be underneath some property.”

For more information about the formerly used defense site program or safety protocol, call 1-855-765-FUDS or visit at www.fuds.mil.