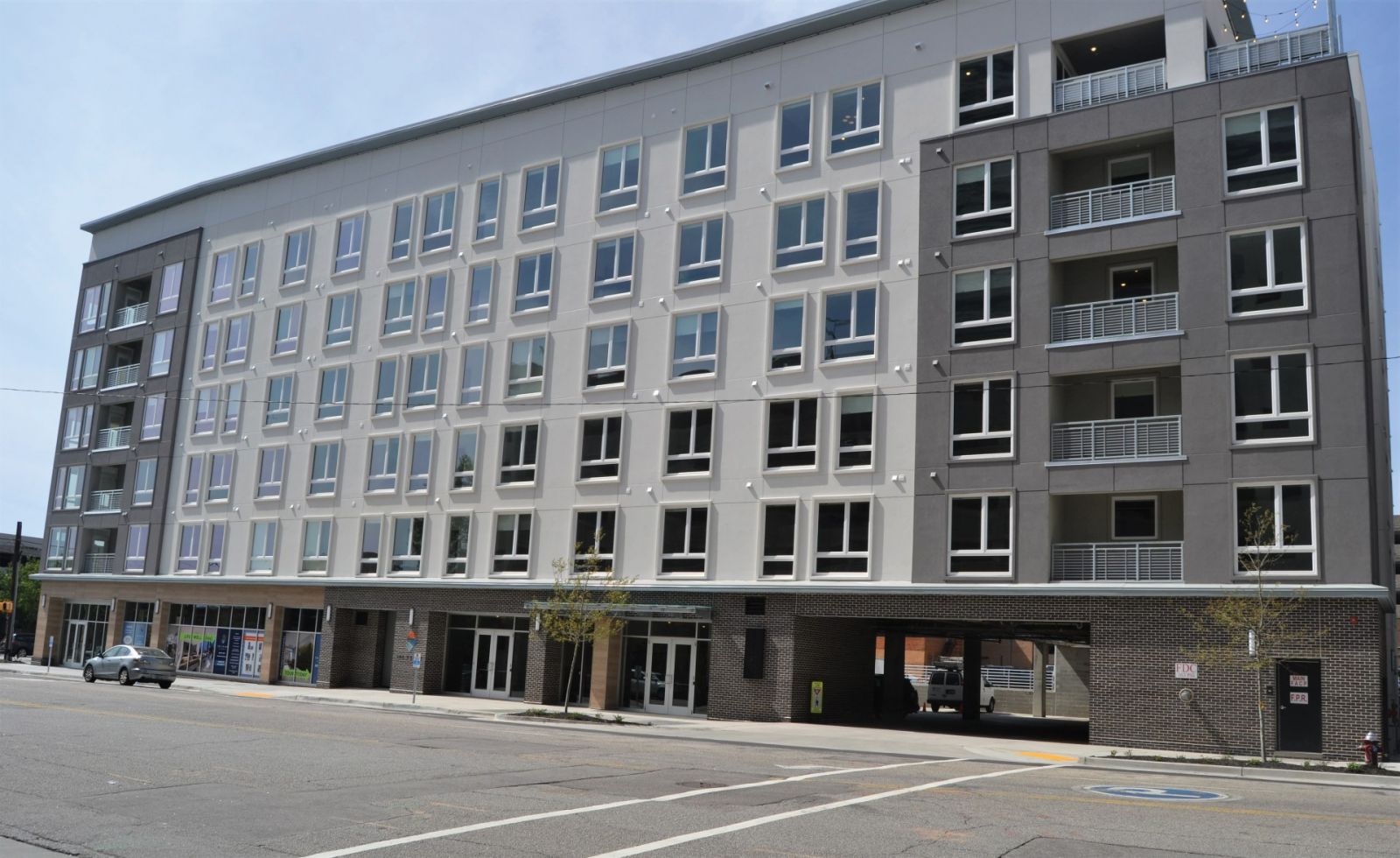 The Palms, an 83-unit luxury apartment building at the corner of Lady and Assembly streets, opened its glass doors to a group of invited guests on March 11. After a ceremonial ribbon cutting led by Ben Arnold, founder and CEO of Arnold Family Corp., attendees filed into the building and onto its elevators to explore model units on the fifth and sixth floors.

As folks mingled in the lobby before making their way to a rooftop resident lounge where a band played and hors d’oeuvres beckoned, Arnold watched from a well-positioned corner.

“We felt like we needed to bring something that was new, not just renovated existing. There’s a lot of that going on,” he told the Columbia Regional Business Report. “This was a great corner.”

“We’re looking to connect the Vista to Main Street, so the Lady Street connection and the streetscaping that is coming up Assembly is key to the area being connected,” he said. “Columbia tends to define itself in these districts — Five Points, BullStreet — when it’s really an urban downtown. We all need to share amenities and help the overall lifestyle of the area.”

The Palms’ amenities include a business center and a pet spa. Units range from 458-square-foot studios to 1,158-square-foot, two-bedroom units.

“It just raises the level of the residential development downtown,” said Matt Kennell, president and CEO of The Main Street District, a downtown economic development organization. “You’ve got a quality developer and proven developer and a very high market-rate project, which sort of raises the bar for other development in the future and brings new customer for downtown restaurants and shops.”

Kennell was on hand for the March ceremony as Arnold told the gathered crowd: “New construction just brings a different dimension” before hoisting a pair of oversized scissors to officially launch The Palms. 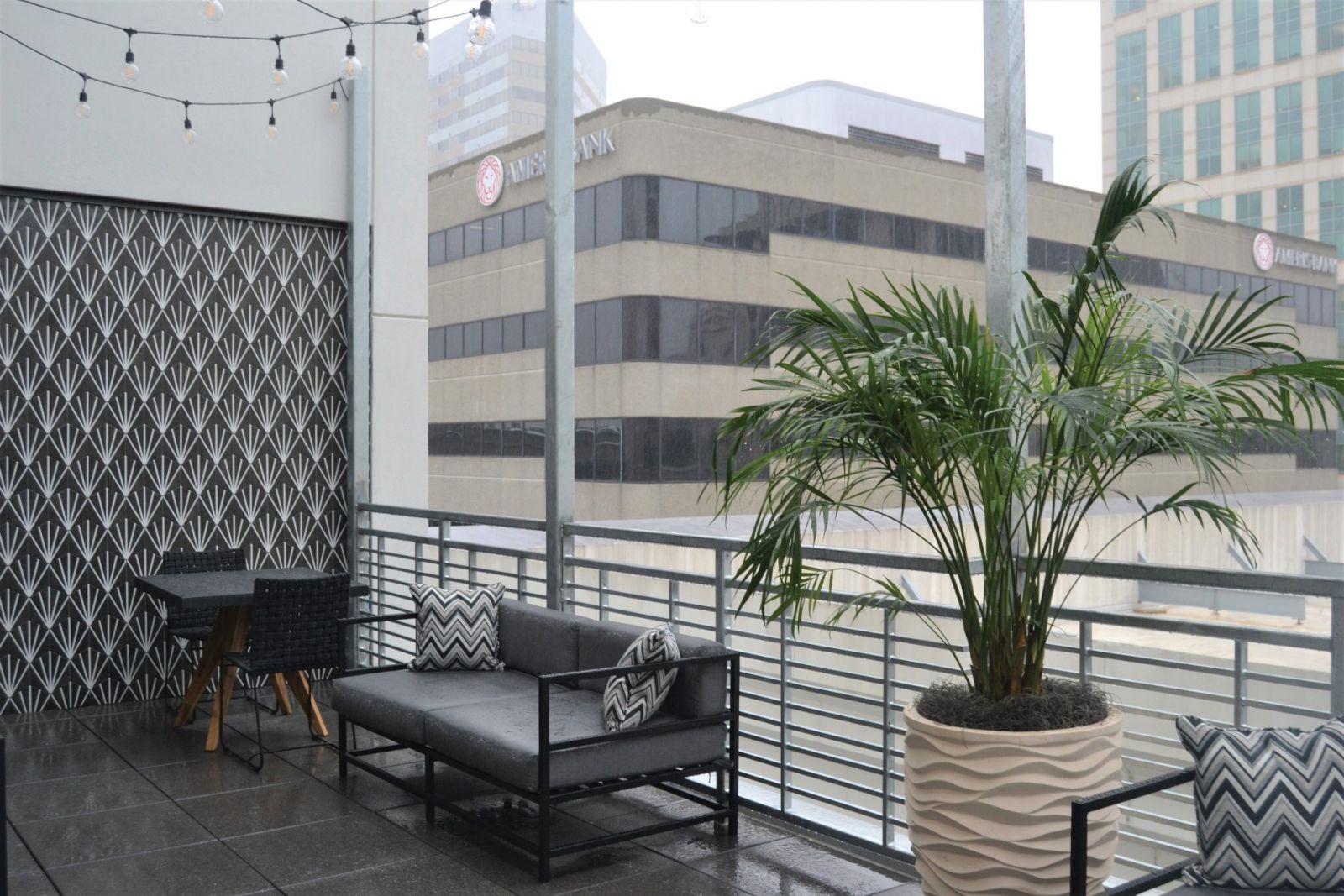 The Palms’ party came a day after Ben Arnold’s father, Norman Arnold, was inducted into the S.C. Business Hall of Fame. The elder Arnold’s name is well-known around Columbia, affixed to the Norman J. Arnold School of Public Health at the University of South Carolina thanks to a $17 million endowment and to exhibits at Riverbanks Zoo & Garden, which he founded and supported. It’s also on the Yaschik/Arnold School of Jewish Studies at the College of Charleston, whose endowment he and his wife matched in 1998.

Norman Arnold, who died in 2016 at age 87, inherited the Ben Arnold Beverage Co. from his father and learned the business from the ground up before taking it over in 1963. He served for 28 years as director of the Wine and Spirits Wholesalers Association, chaired the American Heart Association Heart Fund and served as trustee for Providence Hospital in Columbia and the Medical University of South Carolina in Charleston. In 1977, he earned a Time Magazine Distinguished Community Service Award.

Named for his grandfather, Ben Arnold feels a sense of responsibility as well as pride in continuing to advance the family name.

Noting that real estate is a different ballgame than beverage distribution, Arnold nonetheless credits his family’s drive and innovation with steering his career as a developer.

“I’ve been blessed in my life,” he said. “I’ve traveled a lot and I’ve always been cognizant when I go places of what’s working and what’s not, and my goal is just to bring new and unusual things to the Carolinas.”

Those new things include four- and five-star hotels such as Hotel Anthem and a long-planned hotel to anchor an expansion of the Columbia Metropolitan Convention Center and bolster the downtown area’s ability to play host to large events.

Before the addition of meeting rooms in 2018, the convention center could accommodate crowds of up to 2,100, and those attendees had around 1,500 hotel rooms within a mile of the center for lodging.

Arnold is involved in an expansion project that would add 675 hotel rooms and a couple hundred apartments.

“The problem with Columbia is we don’t have any above three-and-quarter-star hotels. Full-service hotels like the Marriott, built in ’83, and the Hilton, built in the early 90s, are not up to today’s standards,” he said. “And then we have a lot of limited-service hotels. There’s a big piece of the market missing that the business traveler wants.”

Plans for the convention center expansion are still somewhat up in the air, though other residential developments, including The Standard, a 17-story student housing tower, luxury apartments The Lady on Lady Street and a new Cason Development Group project at 1813 Main St., are adding definite density to downtown. Kennell said downtown Columbia’s residential population, currently around 2,000, could double in the next two to three years and keep driving the tried-and-true real estate adage that retail follows residential.

“It’s going to be a lot easier to fill up restaurants,” Kennell said. “I’m just very optimistic about how that’s going to be in the future. … You’ve got to have that residential density. Retail and restaurants are not pioneers. They’re not going to go in first. They go where the customers are.”

This article first appeared in the April 25 print edition of the Columbia Regional Business Report.