Whenever Mickey Layden looks at a chair in her kitchen, she will think of Cathy Novinger.

Every time JoAnn Turnquist makes an introduction, she will remember Judy Davis.

“They are both going to leave exactly the same kind of legacy of selfless community service,” said Mike Brenan, president of BB&T’s South Carolina region. “You can look up selfless in the dictionary, and there’s going to be a picture of Judy Davis and Cathy Novinger.”

Brenan, whose wife grew up with Davis in Mansfield, Ohio, is just one of many area business leaders who interacted with one or both of the women and came to cherish their leadership skills as well as their friendship.

Layden, president of project management company LCK, remarked during a visit to Novinger’s home on some antique kitchen chairs that reminded Layden of her grandmother’s house.

She soon found out how well her friend listened.

“It wasn’t long after I mentioned those to her that I got a call that there was a box for me downstairs,” Layden said.

Inside was a chair fashioned after the ones she had admired, ordered by Novinger.

“That chair is still sitting in my kitchen,” Layden said. “I told my husband, it will be a constant reminder of Cathy.”

Turnquist, president and CEO of the Central Carolina Community Foundation, where Davis served as board chair, said Davis also made a point of building up friends and colleagues and introduced them with a personal flourish. She’d mention how much enrollment at Columbia College (the board of which she also served on) had increased under president Beth Dinndorf, or how much money the United Way of the Midlands (which named her its Humanitarian of the Year in 2014) raised under the leadership of president and CEO Mac Bennett.

“Even though Judy herself was very accomplished, she always made a point of celebrating the accomplishments of those she cared about,” Turnquist said. “She always paid full attention to people when she was speaking with them, regardless of the situation. She made everyone feel critically important.”

Both women broke ground for area businesswomen. Layden often compared notes with Novinger about being a female leader in the corporate world, discussing clothing, conduct and challenges.

“She was able to operate and influence events in our community when she was the only woman at the table,” Layden said. “She operated in a man’s world and was totally comfortable in it, but she was also very interested in helping other women achieve the same goals that she had. She liked to connect the dots and connect women with opportunities.”

Novinger, from the small town of Portsmouth, Ohio, moved to Columbia in 1968. Mary Winter Teaster, senior brokerage associate at Colliers International and former senior managing director and principal of CBRE/Columbia, said Novinger worked to make such transitions seamless for other women.

“She did a tremendous job of welcoming new women to the area,” Teaster said. “She would arrange lunches or roundtables just to pull them in to other working, career women circles, because she knows it’s hard to break in. … What was intriguing about Cathy was, she was surrounded by men, but she was not one of the boys. (She) didn’t want to be.”

Novinger rose from a position as file clerk in SCE&G’s accounting department to become senior vice president for administration, government and public affairs for parent company SCANA. After retiring in 1999, she built her own consulting business and took on leadership roles in the Palmetto Agribusiness Council, the Midlands Business Leadership Group and the State Board of Technical and Comprehensive Education. The United Way of the Midlands selected Novinger its Humanitarian of the Year in 2010.

“It’s very hard to think of an individual who was as involved in every aspect of Columbia,” said Steve Benjamin, Columbia’s mayor, who first met Novinger in 1993 when he was a law student. A year later, Benjamin worked with Novinger on higher education reform.

“It was a wonderful opportunity for a young lawyer, a young African-American lawyer, at a large firm to see a woman in a position of power, calling the shots, directing the energy and leading us toward a strong legislative victory,” Benjamin said. “She left an impression.”

“She was able to bring a business perspective with a common sense of knowing how the political system worked,” Coble said. “You had to have the right ideas that made sense, but you also had to have the ideas that brought the community together.”

Davis’s community involvement included serving on the boards of the S.C. Governors School of Science and Mathematics Foundation, EngenuitySC and the Palmetto Conservation Foundation. She led the United Way’s $9.5 million fundraising campaign in the Midlands in 2006, and she helped launch the Central Carolina Community Foundation’s annual charity fundraiser, Midlands Gives, which has raised $3.8 million since its 2014 inception.

“She found all these things that had social value to the community, and she just lined them up and did them,” said Ed Sellers, chairman of the board of BlueCross BlueShield.

Anne Castro, vice president and chief design architect of the company’s IT operations, forged a fast friendship with Davis, marveling at her quick grasp of complicated technical issues.

“She was just one of those people that you spend your life saying, ‘I want to be like her when I grow up,’ ” Castro said. “She’s just someone you want to emulate – philanthropically, professionally. You want to talk like her in a meeting.”

Sellers, who retired in 2010 after 18 years as BlueCross BlueShield CEO, recruited Davis to the company in 1995 – a fact noted in an internal memo lauding Davis’ contributions sent to employees by current CEO David Pankau on Monday. The memo credited Davis with transforming the organization’s corporate law department.

Sellers remembered how Davis assigned in-house lawyers from 10 or 15 separate business units to different divisions, telling them,“ ‘You’re going to act as their general counsel. I want you to come back in 30 days and write a paper on what their business strategy is – products, markets, competition – and then you’re going to tell me how you’re going to help them.’ …. She had a sense of the role and the strategy of the whole entity,” Sellers said. “It was an extraordinary move.”

Pankau said Davis also led BlueCross BlueShield’s mergers and acquisitions, and Sellers said her generous nature did not always extend to business dealings if a hardline approach was in order.

“Imagine a very pleasant person coming into the room, all smiles and gracious, and she wants to know how you’re doing – very outwardly focused, rarely talking about herself,” Sellers said. “You’re thinking, ‘She's really nice,’ right? Tough as nails. If you tried to pull a trick on her, I hope your will is in good shape, because you’re gone. It was this fascinating sort of velvet glove thing. She didn’t have to stomp about and act tough. She just was.”

Novinger’s gracious demeanor also cloaked a steel backbone. The United Way’s Bennett remembers being tossed out of her office after a disagreement, but harboring no ill will.

“You could disagree about something, but that didn’t make you enemies,” Bennett said. “She was able to work with so many different people coming from different places and wanting different things. Cathy was just incredible at finding common ground.”

“She had the cohesive ability to pull all the people together in the room and solve problems, and not just anybody could do that,” Rawl said. “She had some of the best people skills of anybody that I know. She could deliver a tough message to you without you getting mad. She could take you to the woodshed, and you’d understand that what she was saying was exactly right.”

Novinger brought the same determination to her fight against ovarian cancer after being diagnosed in August 2005.

“Cathy’s gone through this a long, long time,” said BB&T’s Brenan, who came to know Novinger through various community initiatives and learned that he had worked early in his career in her Ohio hometown. “This would have defeated others a lot sooner than it defeated Cathy.”

Said Pankau: “They were both extremely strong individuals, probably among the strongest people that I’ve ever met, and it was that strength that allowed them both to fight for a very long period – in Cathy’s case for years and Judy’s a little over a year. They both, as far as I can tell, never gave up.” 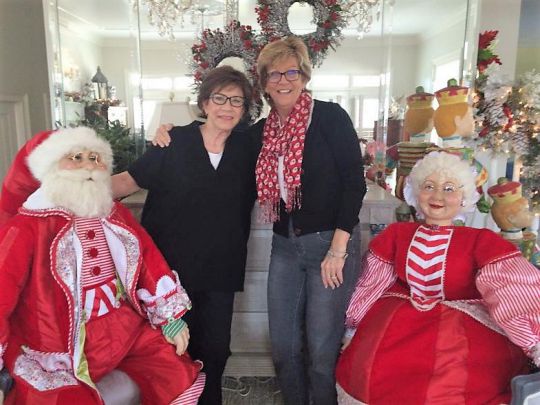 After Novinger’s diagnosis, she founded what is now the Ovarian Cancer Coalition of Central S.C. and established the organization’s signature event, the annual Ovarian Cancer Butterfly Release at the Statehouse.

Novinger was named one of Columbia Metropolitan Magazine’s Five Women of the Decade and received the Order of the Palmetto in 1999.

“About both of them, I would sometimes wonder, when do they sleep? When do they cut the lights out and just take a break?” Bennett said. “They were both just so driven to get things done. … Everyone that knew them, who came in contact with them, was made better by that connection. These are two women that helped, maybe not eliminate, but certainly helped put some cracks in the glass ceiling.”

While intently focused on her career, Davis was also a “Renaissance woman,” said Turnquist, with an impressive art collection and a love of traveling with her husband of 30 years, Jerry. Co-worker Castro tried to join Davis’s book club, “but I hated the books,” she said. “They were just too upper-crust for me.”

Novinger also had a creative side, running a West Columbia antique shop while building her consulting business, Novinger QTR Inc.

“She was always looking to the future. She was not averse to change,” Teaster said. “She truly is irreplaceable.”

Teaster said she feels Novinger’s presence encouraging her daily, and Castro has concrete evidence that Davis is still involved in her life. Castro is retiring from BlueCross BlueShield after 35 years, and Davis had already planned her year-end retirement party.

“That’s like her – the last two months, to be thinking about somebody else,” Castro said.

Layden witnessed a striking example of Novinger’s devotion to her friends this past September when she received an award from Transitions, the downtown homeless center Novinger was instrumental in creating.

Novinger, in the latter stages of her cancer fight, presented the award – named in her honor – to Layden in person.

“I can’t tell you what it meant to me,” Layden said. “… She could hardly get up out of the bed (and) left straight from there and went to the hospital. It just speaks volumes of what she would do for her friends.”

In addition to her husband, Davis is survived by her parents and brother. A reception for friends and colleagues will be held Dec. 15 from 4 p.m. to 6 p.m. at the new United Way of the Midlands Center at 1818 Blanding St. A private family interment service will be held later in Ohio.

Novinger is survived by her husband of 48 years, Robert Novinger, as well as her mother, her sister, her son and two grandchildren. A visitation will be held Dec. 3 from 5:30 p.m. to 8 p.m. and a funeral service Dec. 4 at 3 p.m. at Trinity Baptist Church in Cayce.

“They set a standard of grace of how women could be in the corporate world and be influential but still be women of grace and power,” Layden said. “There is a hole and a vacuum that’s been left.”