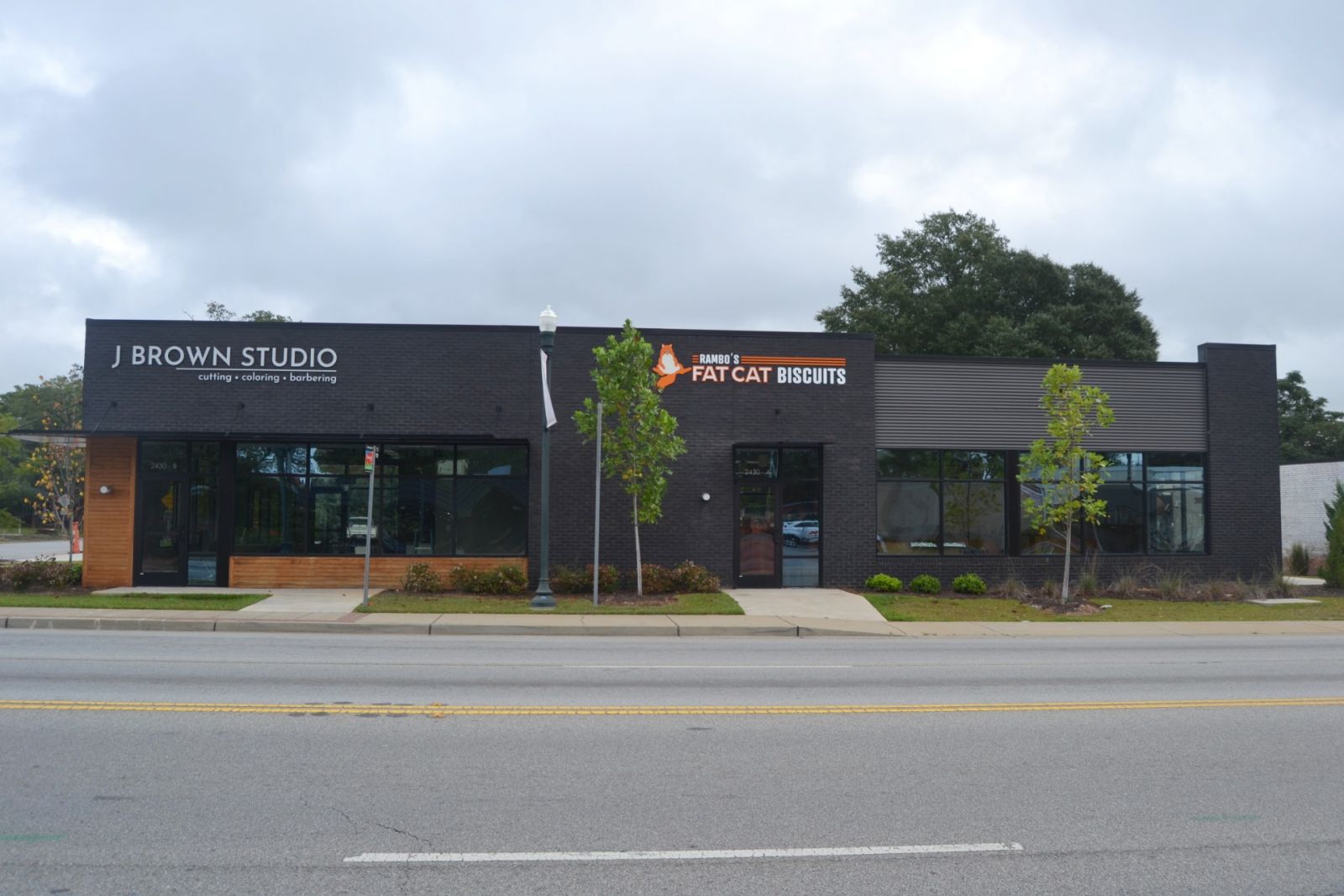 Todd Adams paused midsentence as an older gentleman poked his head in the door.

“Y’all ain’t open yet,” the man said with obvious disappointment.

Stop back by in two weeks, Adams advised the man, drawn to the still-unfinished counter of Rambo’s Fat Cat Biscuits in Cottontown by a new sign freshly affixed to the NOMA Station building that houses the brick-and-mortar manifestation of the popular popup gourmet biscuit business.

Such enthusiasm is one reason Adams remains optimistic about opening a stationary location for Rambo’s Fat Cat Biscuits even as the COVID-19 health crisis stretches months past what he and Renee Adams, his wife and business partner, expected when they signed the lease in the two-unit building at 2430 Main St. in Cottontown.

“We signed our lease like two weeks after the city closed down” in mid-March, Adams said. “The ball was just rolling. At that point, the expectation was this (pandemic) might last a couple months. We’ll get this taken care of. We’ll be back to normal by the end of summer. And that’s clearly not the case.

“It was very nerve-wracking. We just decided that we were in it to win it.”

Adams will have company in the 2,500-square-foot shell building architecture firm Studio 2LR built on the lot at the corner of Main and Confederate Streets as part of its 2016 relocation from the Vista. Hair salon J Brown Studio is now open in the 1,000-square-foot Suite B after moving from Garners Ferry Road.

Suite A will house Rambo’s Fat Cat Biscuits’ 1,500-square-foot operation, including a full kitchen. Adams' goal is to open the first week of November.

“We’re thrilled to have these local businesses that decided to set up shop over here,” said Tripp Riley, Studio 2LR vice president and project lead architect. “There’s been a lot of interest to move out here. The neighborhoods have been extremely supportive — Earlewood, Elmwood Park. All of them are just extremely supportive, and our North Columbia Business Association has been very excited about the growth and opportunity and helping promote as well. We’ve been welcomed with open arms over here, and we feel that way with all the new businesses coming this way, too.”

Adams said he looked at several locations, including ones in Rosewood, Cayce and Forest Acres, before deciding on the Cottontown building.

“The chance to get into a great neighborhood like this, in a brand-new shell building, build it out as we would like to — it’s just the best of all worlds,” he said.

A brick-and-mortar home was a back-of-mind goal since Rambo’s Fat Cat Biscuits began, Adams said, but “it was probably more of a pipe dream at the time.”

Originally from Connecticut, Todd Adams had noticed a breakfast biscuit niche that needed filling in the Columbia community he’s called home for 30 years. Inspiration came from a long-time love of wife Renee, a local for a decade after moving from Michigan.

“My wife had a cat named Rambo” since middle school, Adams said. “He was a fatty. He looked just like (the logo). At one point, he was up to 25 pounds. When I knew him, he was a little lighter. He was around 18, 19. … We just liked the visual of the fat cat, and then the play on the cathead biscuits — in Southern culinary terminology, a big biscuit.”

The business was born when Adams lost a previous gig.

“I had been in the food sales industry and got let go due to some economy issues, and just kind of took a chance and did something that I wanted to do,” he said. “We started working on recipes at the house, and we got pretty good at it. … We just tried, and we ended up having some luck and having a pretty good following around the town.”

With offerings such as chipotle pimento cheese and sausage and smoked brisket, the biscuit buzz built from a Saturday booth at Soda City Market into popups around town at places such as Cottontown Brew Lab, Curiosity Coffee Shop and Craft and Draft. The husband-and-wife team began looking for a permanent home last summer, though the search for funding proved patience-testing.

“I got turned down for several loans, and I just had to keep being persistent with it,” Adams said. “It took us a while to get funded. We finally got a loan roughly last holiday season, and NOMA Station here was still open, so we started negotiating.”

At the time, “we really did think that we’d be back to a regular type of business by the end of the summer, and maybe back to full capacity at some point in the fall,” Adams said.

While those expectations have not been fully realized, other distribution avenues, such as catering and especially delivery and pickup, have taken off.

“When Soda City Market closed down (from March until late June), we did deliveries on the weekends, Saturdays and Sundays, and we saw that there was just a huge market for it,” Adams said. “We were busier than we were at Soda City Market. A lot of people were losing money. We were actually making money, and it was kind of surprising. It was still the time when people were not going out at all, and if you could get a non-contact delivery to your house on a Saturday or Sunday morning, people were jumping on it, and I don’t think that is going to go away.”

Adams plans to be open Tuesday through Friday from 7 a.m. until 2 p.m. and from 9 a.m. until 3 p.m. on weekends. A breakfast menu will be available all day, with a limited lunch menu offering items such as an heirloom tomato BLT. Expanded brunch options on the weekends will include in-the-works delicacies such as crab cake Benedict as well as mimosas.

A longtime friend and business partner makes most of the food now, Adams said, while one or two more kitchen staff members will likely be brought on soon.

“We’re super-excited,” said Adams before heading to Charleston to pick up a load of dining room supplies just purchased at auction. “In the last two weeks, we’ve seen just incredible feedback. There are a lot of people that are looking forward to something new. It’s just a time where people are looking to see some good news in the business and in the industry.”