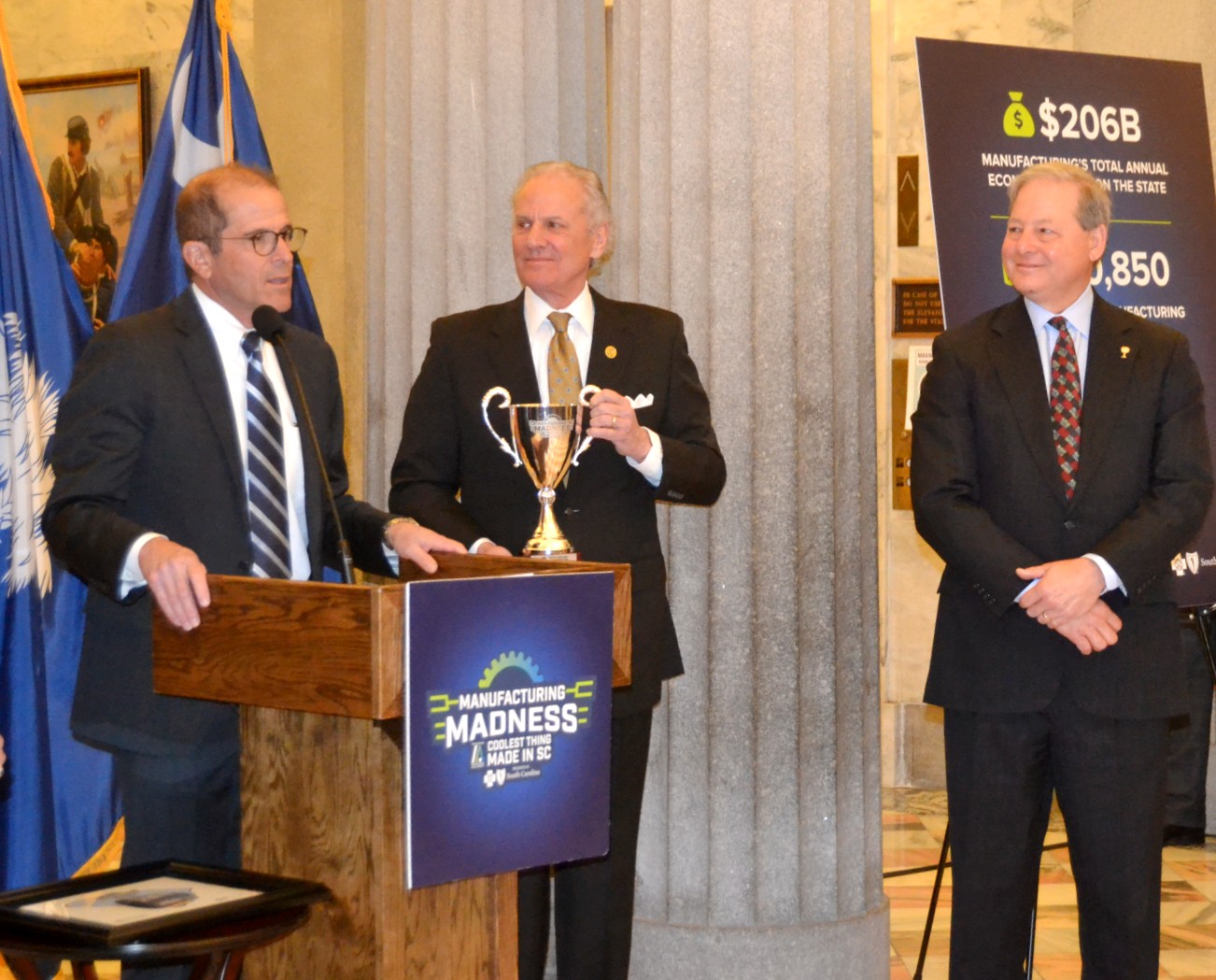 With the annual NCAA March Madness basketball tournament wrapping up this weekend, Manufacturing Madness crowned a state champion on Wednesday.

Steel beat out three other contenders to be named “The Coolest Thing Made in SC,” with Nucor Steel Berkeley in Huger winning the inaugural statewide contest launched in February by the S.C. Manufacturers Alliance along with corporate partner Blue Cross Blue Shield of South Carolina.

“We knew we wanted to celebrate the manufacturing industry in South Carolina. We’re always looking for new and creative and innovative ways to do that,” Sara Hazzard, president and CEO of SCMA, told the Columbia Regional Business Report.

The organization asked the general public to suggest S.C.-made products for the honor and received 175 nominations, Hazzard said. Voting narrowed that field to a 16-competitor bracket, trimmed in half each week before the final four, honored in a ceremony at the S.C. Statehouse, were decided.

More than 110,000 votes were cast on the contest website, scmanufacturingmadness.com, during the competition, Hazzard said.

“We were blown away by the response. The general public really got excited about the contest,” she said. “The employees within each of the manufacturing companies that were participating got very excited about their product being nominated, their company being recognized. It made it really clear how proud South Carolina manufacturing workers are of what they do every day and the products that they make.”

“What a great idea to showcase what we do in our state,” Lee said. “There’s so many incredible things we make in South Carolina that nobody knew we ever did that not just impact South Carolina but impact our country and the world.”

The other three finalists were: the Electrolux and Frigidaire single-door refrigerator and freezer, made by Electrolux Home Products in Anderson; the F-16 Fighting Falcon, made by Lockheed Martin in Greenville; and the Talon 1,000 X-4 side-by-side all-terrain vehicle, made by American Honda Motor Co. Inc. South Carolina Manufacturing in Timmonsville.

“The four finalists are trendsetters,” Hazzard said in presenting the finalists, who each received a plaque from Lightsey. “They’re game-changers.”

The Berkeley County plant’s greenhouse gas emissions are also less than half the average for all global steel manufacturers, according to SCMA.

“South Carolina’s manufacturing industry is a leader for advancing prosperity and opportunities in every corner of the state,” said Michael Harris, vice president of sales for major group, chamber, associations and student health plans at BlueCross BlueShield of South Carolina. “What this industry does in our state is transformational not just economically but in giving paths for our citizens a better future that has generational impacts.”

Lee said his facility’s product can be found coast to coast, from automobiles manufactured by BMW at its Spartanburg plant to SoFi Stadium in Los Angeles, which played host to this year’s Super Bowl.

“Our stainless steel products are in many of the amazing things that are made in this state and this country,” Lee said. “I thank everyone who participated in the Manufacturing Madness event, including all our Nucor teammates, because they are the ones who are making the coolest thing made in South Carolina day in and day out, day shift and night shift, 24 hours a day, seven days a week, and they’re doing it very, very safely.”

Lockheed Martin’s Greenville facility, which plans to expand from 850 to more than 1,000 employees by 2023, has been in operation since 1984, providing aircraft modification, maintenance and repair services for military and civil aircraft.

“As manufacturing flourishes in South Carolina, so do the people,” McMaster said. “This kind of contest brings the kind of recognition that just makes us stop and think for a minute about what a great place this is.”

It also illustrates the resiliency of the manufacturing industry in the midst of ongoing supply chain delays and other workforce complications stemming from the COVID-19 pandemic, Hazzard said.