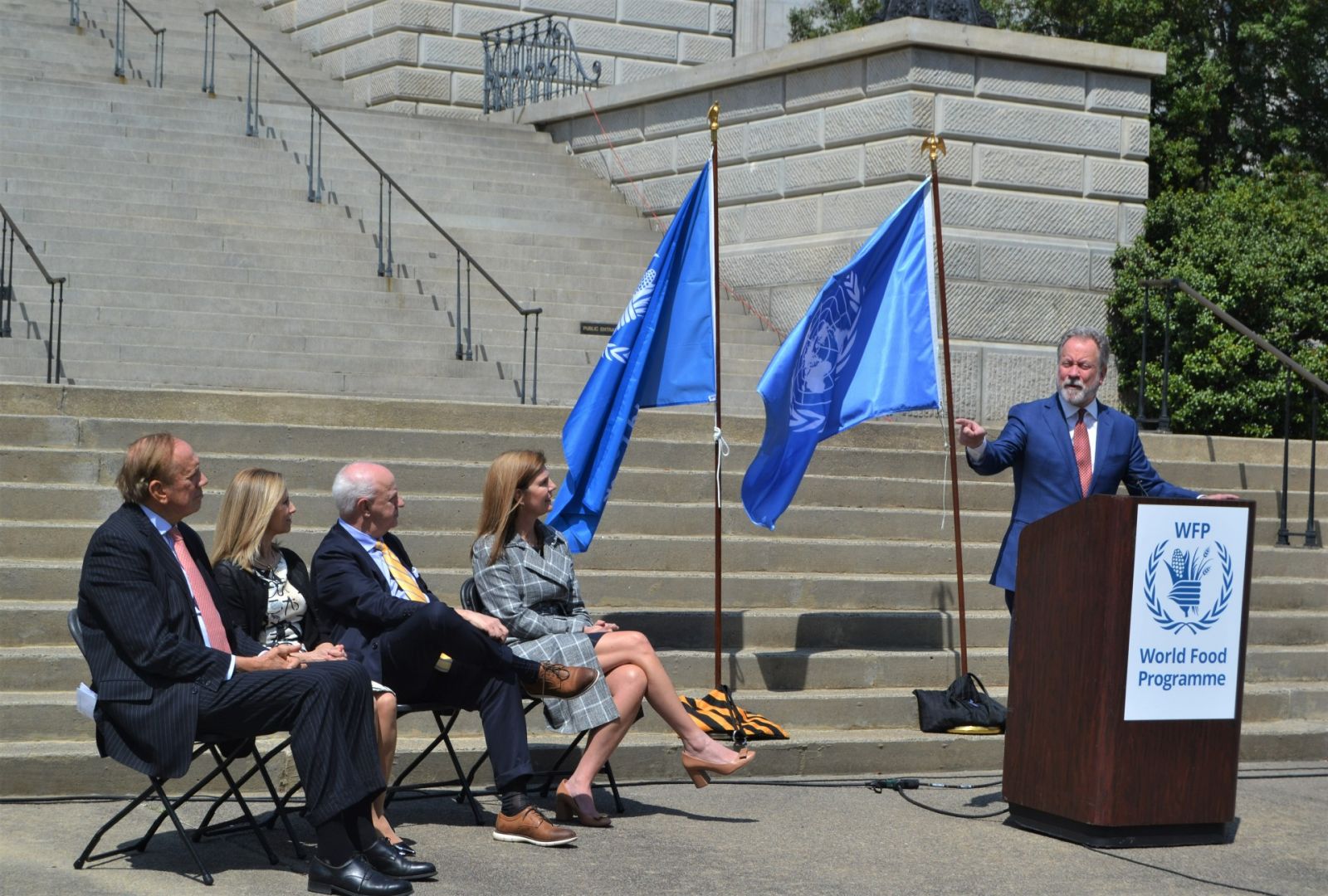 Former S.C. Gov. David Beasley descended the steps of his old office building on Tuesday to appeal to the private sector for donations to stave off a humanitarian crisis he warned could rapidly spiral beyond Ukraine.

Citing 40 million people still inside the country at risk of severe food insecurity after the Russian invasion of Feb. 24, Beasley, now the executive director of the United Nations’ World Food Programme, called upon corporations and individuals to help curtail what he called the “worst crisis Europe has faced in a decade” during a news conference at the S.C. Statehouse.

Beasley has led the WFP, awarded the Nobel Peace Prize in October 2020 for its work providing lifesaving food to millions worldwide, since April 2017. He emphasized Tuesday that the looming crisis in Ukraine will soon be a global one if the WFP cannot raise $850 million in additional costs it will need by the end of this year to try to mitigate the damage.

“The last thing we want to do is take food from a child in Ethiopia to give to a child in Ukraine,” he said.

Beasley, who said he’s been in Ukraine three times in the last three weeks, was joined Tuesday by former N.Y. Gov. George Pataki, who has also visited the country through his George E. Pataki Leadership and Learning Center. The nonprofit is collecting funds for a Ukrainian refugee camp in Hungary, from which Pataki’s grandparents emigrated.

Pataki said that while news cycles are full of announcements of billions in aid to Ukraine, “you don’t see it on the ground. You don’t see food, medicine, clothing, health care needs being delivered directly to those refuges in Ukraine,” he said. “We’re going to continue to look to do as much as we can through the Pataki Leadership Center, but I can tell you, what we can do is nothing compared to what David Beasley and the World Food Programme can do.”

Echoing Beasley’s call to help were former S.C. Gov. Jim Hodges and Lt. Gov. Pamela Evette. The guests who made the biggest impact, however, were not on the official agenda.

Liliya Kimbrell, wife of S.C. Sen. Josh Kimbrell, is a native of Ukraine. She was on hand to welcome her sister and niece, who fled the country through Poland and joined Beasley at the podium.

“She escaped with her two little kids, but our parents are still there,” said Liliya Kimbrell, who said she talks to her parents three times a day. “We’re really worried about the situation, the critical time. It’s so devastating. We never thought this was going to happen in 2022. But I was just so glad she could escape. She went through a nightmare to get where she’s at right now. … We don’t know what the future holds for them right now, but at least they’re safe.”

Stories such as those are what helps drive Beasley, who said that when he joined WFP, 80,000 million people faced starvation globally. That had grown to 135 million before COVID, he said, largely because of manmade conflict and climate shock.

Since the pandemic, 276 million people don’t know where their next meal is coming from, he said. Those numbers will only grow if timely aid can’t reach Ukraine, where farmers are “on the frontlines fighting when they need to be in the fields planting corn” with wheat harvesting season less than three months away.

As of now, WFP has reached a million people in the country and hopes to reach two and a half million in April, four million in May and six million in June, Beasley said. He appealed for donations at wfp.org of $5 but also said: “Those of wealth, who’ve made millions during COVID, it’s time to step up in ways you never could have imagined. The world needs you now more than ever.”

Beasley, who said he’s in close contact with Andres, said such initiatives are crucial to prevent the “absolute devastation” of global destabilization and famine the Ukrainian crisis could trigger.

“We can’t afford for Ukraine to collapse. … You’ve got almost four million people who have already fled the country, and they’re the lucky ones,” he said. “They’re the ones who are being met at the border with loving arms of strangers and neighbors and friends and family. They’ve got shelter and food and they’ve escaped harm’s way. But you have 40 million still inside Ukraine that are still struggling.”