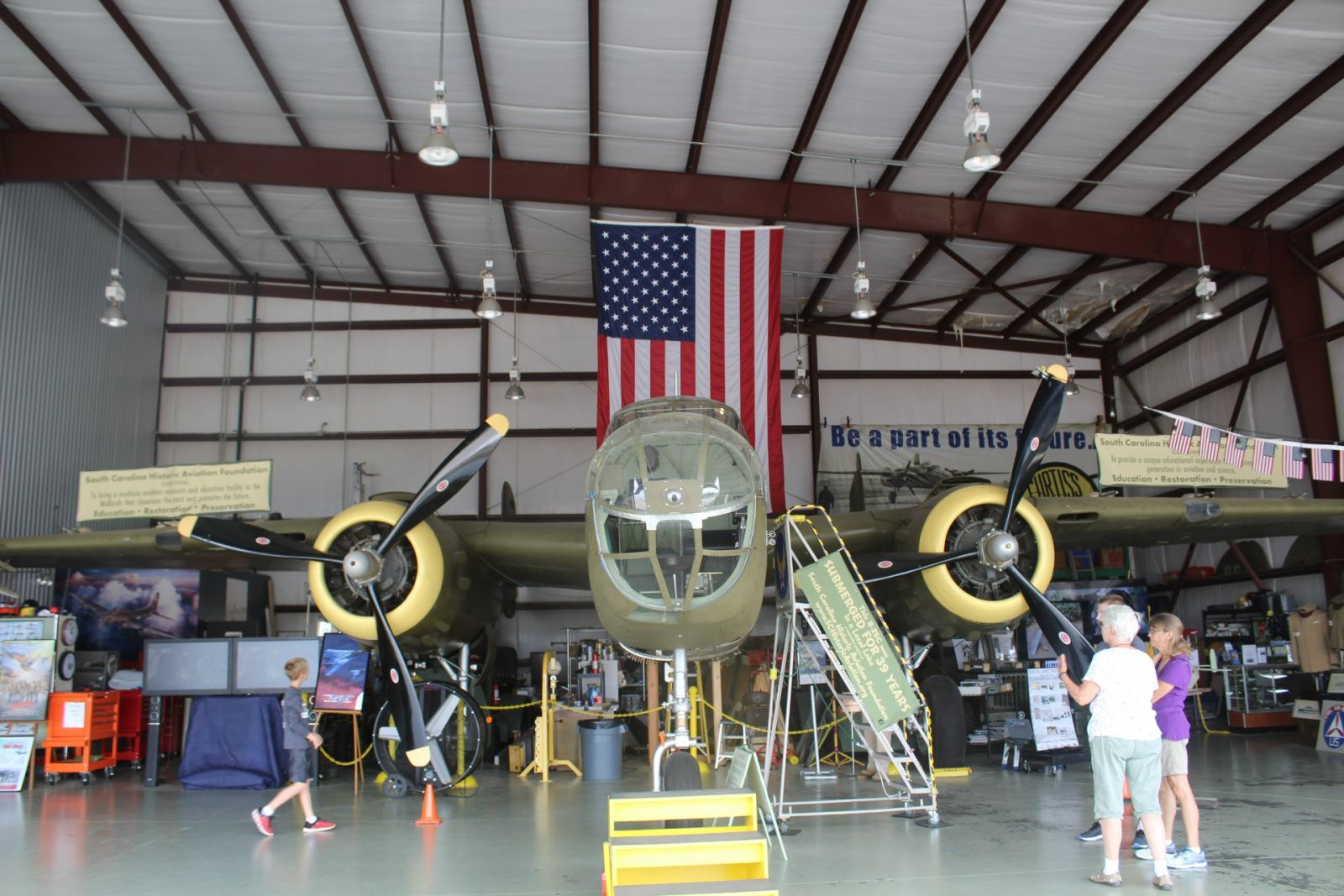 An irreplaceable piece of South Carolina’s aviation history sits in a rented corporate hangar in Columbia, being restored to its former glory by volunteers while it waits for a permanent home.

The B-25C Mitchell Medium Bomber, fished from the depths of Lake Greenwood back in 1983 where it sat for 39 years after it was lost on a practice run in 1944, is believed to be one of only three B-25Cs still in existence.

The plane bounced from place to place for years and its chances of remaining in the Midlands were in jeopardy until a group called the South Carolina Historic Aviation Foundation formed in 2010 with the goal of restoring the bomber and using it as a way to teach people about S.C.’s long history of aviation.

Now, SCHAF volunteers spend two nights a week working on the plane to restore it to its original condition, and on the second Saturday of every month the group’s members hold an open house at its hanger at Jim Hamilton – L.B. Owens Airport near Columbia’s Rosewood neighborhood to let the public view the plane and learn more about the restoration efforts.

The goal, according to SCHAF president Kenneth Berry, is to eventually build a permanent aviation museum to house the plane and other artifacts the organization has collected over the years, many of which are on display at the hangar.

“This plane is an important part not only of the state’s aviation history but as a symbol of the history of the state and the nation, and what folks did for us back during World War II so we could live the lives we have today,” Berry said. “This plane has really taken on a life of its own since we bought it. The airport likes having it here because it attracts visitors and people, especially kids, like being able to see it and to visit the displays.”

B25s play a special role in the World War II history of the Midlands because pilots trained on the bombers at the Columbia Army air base, best known for producing the famous volunteer crews known as “Doolittle’s Raiders” who trained under Lt. Col James “Jimmy” Doolittle and bombed Tokyo in 1942, the first retaliatory attack by the U.S. on Japan after the bombing of Pearl Harbor.

Pilots trained on the B-25 in South Carolina played key roles in air battles overseas throughout the war. The plane currently owned by the SCHAF was stationed at the Greenville Army Air Base. On June 6, 1944, it was on a training run over Lake Greenwood when the instructor pilot swooped too low and was forced to ditch in the lake when the propellers touched the water. The five-man crew survived but the plane sank.

Fast forward to 1983 when the plane was recovered, in an effort aided by several local women who witnessed when it went down and were able to pinpoint exactly where in the lake to find it. After that, the plane was owned by several different groups and eventually made its way back to Columbia, where it was first housed in the historic Curtiss Wright Hanger at the Owens airport. The bomber made appearances in 1992 at the 50threunion of the Doolittle Raiders and again in 2002 in front of the State Museum at the group’s 60th reunion.

Many people get the SCHAF’s B-25C mixed up with another B-25 which crashed in Lake Murray in 1943 and was recovered in 2005. That plane has since been relocated to an aviation museum in Alabama.

Berry said the restoration’s goal is not to restore the plane to the point where it can be flown but to make it as authentic as possible for viewing on the ground. He said the SCHAF is always seeking sponsorships from both individuals and businesses to continue the work on the plane and to build the eventual museum.

Over the years, volunteers have combed the internet and gone through other networks to obtain rare original parts for the plane. Some other components have been built by hand, a process aided by hours on the internet and many trips out of state to get original parts such as those that can be found in the meticulously reconstructed cockpit and the bombing turret in the plane’s nose.

Berry said the plane has proved to be an important way to get young people interested in aviation. Some youth who participate in the Young Eagles aviation program at Owens have signed up to volunteer to work on the plane, and others gain interest after seeing the bomber on school field trips. Berry said one student who helped to work on the plane is now attending the U.S. Air Force Academy in Colorado, and another got into aviation after joining the U.S. Navy.

“Seeing something like this is a great way to get kids interested in aviation and also in the science and technology surrounding it, especially because a lot of kids aren’t exposed to the field these days,” he said. “Every once in a while, we’ll get a student in here and you can see the interest spark as they’re looking at the plane. You can see that light go on in their eyes.”