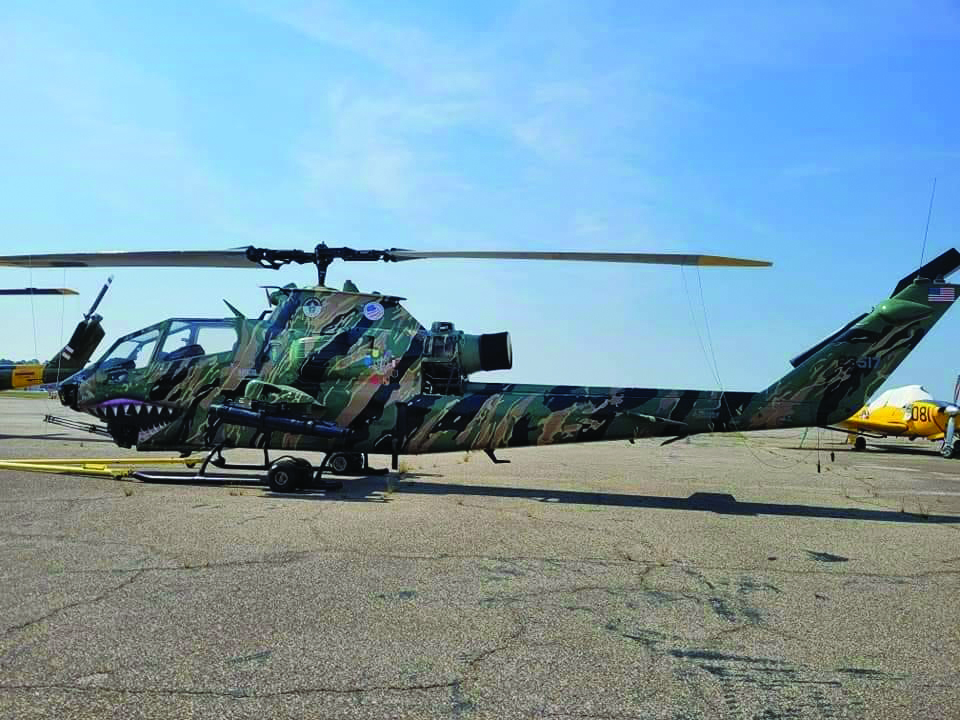 Lori Wicker is likely one of the only people you will ever meet who regularly shows up at public schools with a helicopter or an airplane in tow.

As executive vice president and director of science, technology, engineering and math education outreach with Columbia-based nonprofit Celebrate Freedom Foundation, she and others with the organization regularly travel the state, teaching students from elementary through high school about STEM skills such as science and math using aviation as a tool. When they visit a school, Wicker and the other CFF members also bring with them one of the aircraft the organization owns. These include a T34-B navy flight trainer as well as retired Huey and Cobra helicopters.

The goal, Wicker says, is not only to develop STEM skills but to inspire the next generation of young people to get interested in careers related to aviation and aeronautics.

It’s an important goal in a state where the aerospace industry is growing by leaps and bounds, with no end in sight.

South Carolina is currently home to two important aircraft production facilities, with Boeing building its 787 Dreamliner line in Charleston and Lockheed Martin producing F-16s on its new assembly line in Greenville. Dozens of other companies around the state produce everything from aircraft parts to composite materials used to build aircraft.

Aerospace both directly and indirectly has an impact of $28.8 billion annually on the state’s economy, according to a 2020 study by SC Aerospace, an initiative of the South Carolina Council on Competitiveness. There were 136,244 aerospace employees statewide in 2019, according to the study, a number that has likely grown since then because the aerospace sector is also adding employees at a faster rate than other industries.

The study showed that aerospace employment grew by 10.7% from 2009-19, compared to a 2.2% increase in state employment as a whole.

“We’re doing whatever we can to connect, support and grow the aerospace industry in South Carolina,” said Stephen Astemborski, director of SC Aerospace. “Aerospace has such a huge impact on our economy not only because of the aerospace jobs themselves, but because with every new aerospace job 1.7 additional jobs are created in other sectors. We also want people to know that the industry’s jobs as a whole are very well paid.”

According to the SC Aerospace study, average employee compensation in the aerospace industry in South Carolina is $81,114, compared to an average $59,609 in manufacturing and the state’s overall average salary of $44,986.

With the industry’s huge rate of growth, SC Aerospace is pulling out all the stops to promote aviation careers to everyone from youth to adults looking to change careers. Astemborski said the effort extends from promoting aviation-based curriculum in high school classrooms and at technical colleges to spreading the aviation message at baseball games.

On June 22, SC Aerospace hosted its second annual SC Aerospace Night at a Greenville Drive minor league game. The event included interactive displays set up in the stadium’s concourse by aerospace companies from around the state and focused on every aspect of the industry, from piloting to maintenance and manufacturing. Outreach to area students was fueled by distributing 695 free tickets to the game.

Wicker said CFF’s programs also stress the wide range of jobs available in aerospace. In the past, the organization has hosted summer camps that help teens get their pilot licenses, while its workforce development program in 2019 enabled 12 students to learn how to restore an aircraft which is now on display at Patriots Point in Charleston.

The STEM school program also stresses the full spectrum of aviation careers at the 50 schools it visits on average each year.

“We even focus on the unusual jobs,” Wicker said. “At one school I had a student tell me he wanted to pump gas when he grew up. We were able to do research and learn that an aircraft refueling specialist can earn on average $44,000 a year. The focus is on opening their eyes to the difference between just a job and a career, which means doing something you love.

“There’s a world of careers available in aviation. We’ve had students who go through our programs go into aviation in the military, while others are now working for Boeing and Lockheed Martin.”

Statewide, other volunteer programs are working to get youth of all ages interested in aviation.

Through the Young Eagles program, kids ages 8 through 17 can take airplane rides with experienced pilots on the second Saturday of each month thanks to volunteers at chapters in Columbia, Conway, Greenville, Walterboro, Rock Hill and other locations.

The South Carolina Historic Aviation Foundation, also based in Columbia, works with some youth from Young Eagles and other programs on the ongoing restoration of a World War II-era B-25C Mitchell Medium Bomber that the organization owns.

Schools are doing what they can to promote interest in the aerospace field as well. In 2017, SC Aerospace worked with the Southeast Regional Education Board to launch an aerospace engineering curriculum currently in use in 10 schools around the state, including R.B. Stall High School in North Charleston. Other schools including Greenville Tech Charter High School in Greenville offer curriculum that is more geared toward the piloting side of the aviation industry, but still provides coursework that could be useful in other aerospace sectors.

Boeing South Carolina, meanwhile, is promoting STEM education and interest in aerospace statewide through its DreamLearners program, which targets fifth graders and older students enrolled in STEM programs statewide. Participants not only learn about aerospace topics in the classroom, but also have the opportunity to visit Boeing facilities and meet workers to learn about the industry. DreamLearners is currently virtual because of the pandemic.

The next generations of workers in advanced aeronautics manufacturing, meanwhile, are being trained at the $80 million, 218,000-square foot South Carolina Aeronautical Training Center on the Thornley Campus of Trident Technical College in North Charleston.

Astemborski hopes all of these programs will drive home the message that the aerospace industry offers a future worth exploring.

“Aside from the fact that aeronautics is a lucrative industry and also very exciting and challenging, it’s also a pretty noble profession to go into,” Astemborski said. “Whether you’re flying the aircraft, building it or making the parts that go on it, you’re producing a product that is helping people by getting them where they need to go or delivering goods and services that they might need. You’re working on a world-class, safe product that people can use to see who they love and do what they love.”