At its monthly conference call this week, the S.C. Drought Response Committee determined that drought conditions have improved statewide and lowered or removed the drought status for 38 counties.

Hope Mizzell, state climatologist, said most of the state has received normal to above normal rainfall during the past 60 days, even though October and November typically are S.C.’s driest months.

“Normal-to-above-normal rainfall totals and cooler temperatures have been sufficient to lower the threat for wildfires, improve soil moisture conditions, and increase streamflow, lake levels and groundwater,” she said.

An incipient drought designation, the first level of draught, was removed from 14 counties, placing them at normal status. The committee downgraded 24 counties from moderate to incipient draught status, including Richland and Lexington. Three counties were maintained at moderate drought status. 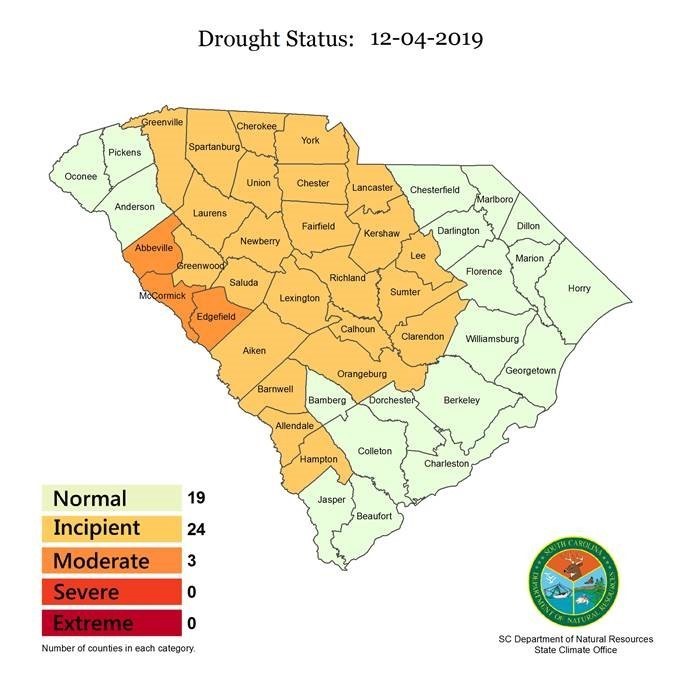 A representative from the S.C. Department of Agriculture told the committee that agricultural conditions have improved from previous months. The soybean harvest is underway while the cotton harvest is winding down. Some winter wheat has begun sprouting thanks to improved soil moisture conditions and recent rainfall, said marketing specialist Katherine Helms.

Livestock producers with grazing stock have planted grazing pasture, but the agricultural department said farmers won’t see any major improvements throughout the winter. In previous months, some livestock producers they had to purchase hay and feed or sell some of their animals because the drought depleted pasture grazing over the summer. The U.S. Department of Agriculture designated six Midlands counties as drought disaster areas in November.

Improved streamflow conditions and groundwater levels contributed to the downgrading of drought conditions in many counties, but those conditions remain below normal in Abbeville, McCormick and Edgefield counties.

Since the committee met at the end of October, S.C. Forestry Commission Forest Protection Program chief Darryl Jones said wildfire conditions have improved dramatically. The commission does not expect any short-term wildfire threat.

“Wildfire activity in November was less than half of what the state normally experiences, compared to the five-year average,” he said.

The committee will meet again in mid-January.