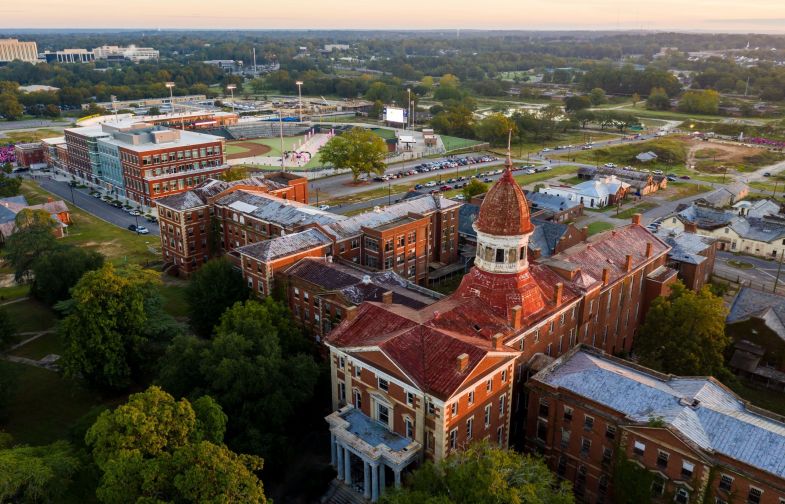 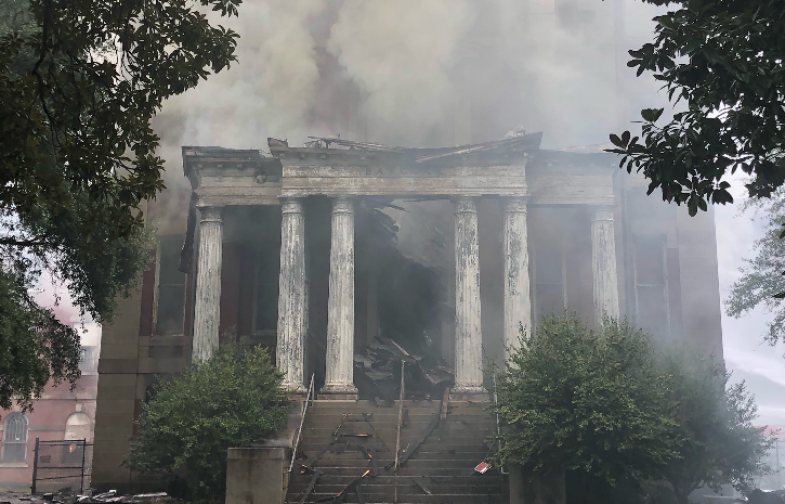 The Babcock building smolders in the aftermath of a Sept. 12 fire. (Photo/John Sherrer)

The fire destroyed the iconic cupola of the building, which once housed S.C. State Hospital patients and was being redeveloped into luxury apartments by Richmond, Va.-based developer Clachan Properties, as well as central portions of the structure.

“Though the iconic dome and the central portions of the interior are destroyed, we are thankful that the Columbia Fire Department was able to contain most of the damage to the central portion of the building,” Robert Hughes, president of Greenville-based Hughes Development Corp., said in a statement Saturday. “We are working closely with various law enforcement agencies to help determine the cause of the fire and will support Clachan as they move forward. ... Progress will continue at The BullStreet District.”

Clachan, which owns the building after a title transfer from Hughes Corp. in January, “was in the final stages of preparation to renovate it for future generations,” according to Hughes’ statement. “Site cleanup had begun.”

Hugh Shytle, Clachan Properties president, said in a statement that the developer is assessing the damage and formulating a plan.

"It will take time to know the extent of the damage, but we have a great project team skilled in historic preservation to help us make an assessment," Shytle's statement said. "Our assumption at this time is that we will be able to go forward because of the rapid response of the Columbia Fire Department. ... Clachan Properties undertook the renovation of the Babcock Building knowing its significance to the community. Our commitment is not diminished. Our enthusiasm is solid."

“It’s a terrific building,” Shytle told the commission. “There is no other Babcock. It is unique.”

John Sherrer, director of cultural resources at nonprofit preservation organization Historic Columbia, was devastated by initial images of smoke billowing from the building, but tours of the site in the past few days have left him cautiously optimistic about what remains.

“I’m not a structural engineer, but I know that the building was built very robustly, and while there’s been a tremendous amount of loss right in that area, to the wood timbers and structural members, the load-bearing masonry seems to be, at least, visually, in good shape,” Sherrer said. “That’s something that the structural engineers will have to suss out and go from there, but I am hopeful. I think others are hopeful. … It’s the last thing you want to see, (but) I’m really hopeful that this will prove to be just a hiccup albeit it a big one, in the project.”

Sherrer is eager to hear Clachan’s assessment of the damage and said he doesn’t foresee any necessary repairs disqualifying the project from historic tax credits the developers worked to obtain.

“I think it’ll go hand in glove,” he said. “There are areas of the building that would have to be repaired anyway — the roof and floors, in addition to windows. … It’s a project that was teed up to begin, within this next month, and it’s been the product of a lot of people from a variety of different municipal, state and local entities working together to ensure these tax credits could propel this project forward.”

From its inception, the project faced challenges detailed by Hughes in a news release announcing the title transfer.

“The difficulty of renovating the Babcock building cannot be overstated because of its cost, size, historic legacy and extremely poor condition,” Hughes said in the release. “Clachan is one of the few companies in the United States that has the craftsmanship, experience, and historic sensitivity to breathe new life into it.”

Built between 1857 and 1885, the Babcock building was formerly called the S.C. Lunatic Asylum and later the S.C. State Hospital, which operated until the late 1990s. The building, added to National Register of Historic Places in 1981, had not been in use since 1996.

“It’s both an imposing landmark and certainly an architectural treasure, but it’s also the physical manifestation of the state’s efforts to take care of mental health patients from before the Civil War all the way up through the third quarter of the 20th century,” Sherrer said.

The fire, which is under investigation, was the second in as many years to strike the Babcock building. In December 2018, a blaze broke out on the top floor and spread to the attic and roof.

“For many decades, the community has worked together to preserve one of South Carolina’s most iconic buildings,” Hughes said. “It is a labor of love for so many people who cherish its historical significance.”