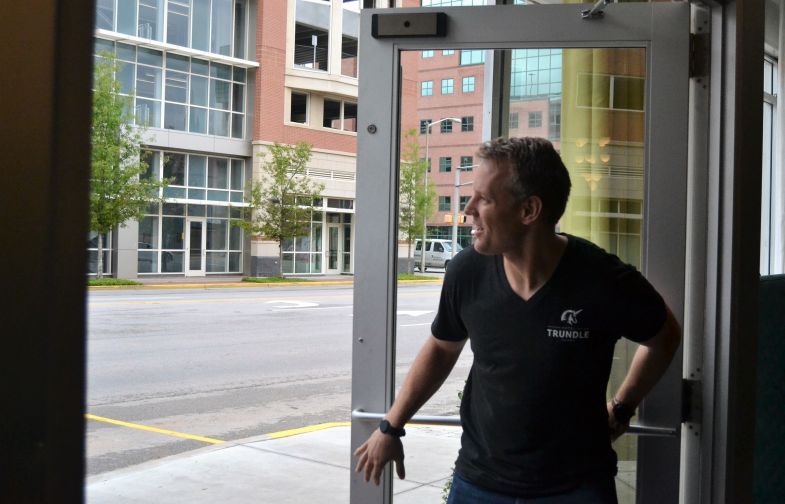 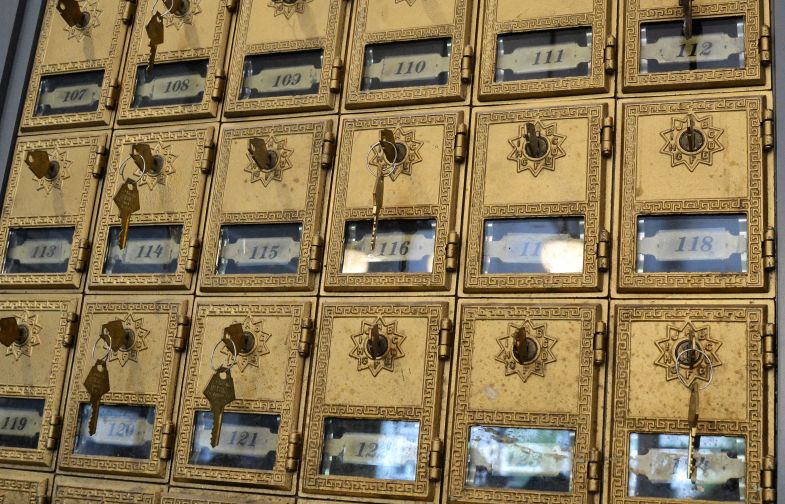 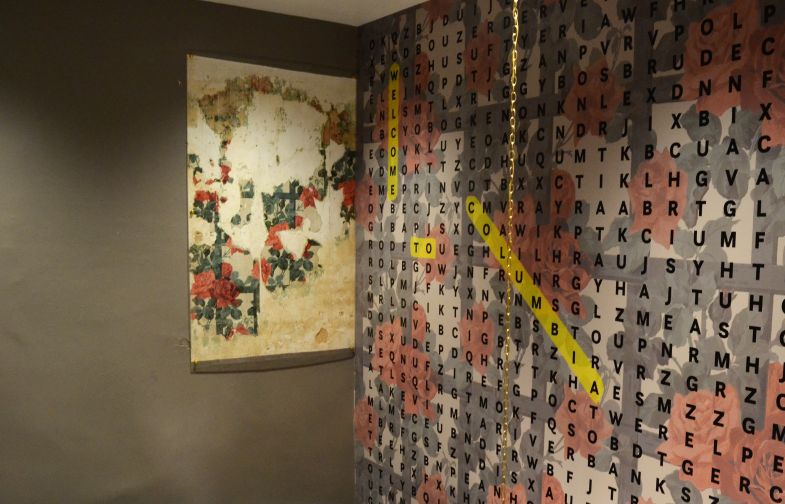 A painted search-a-word is next to a piece of wallpaper preserved from the original Rose Talbert building. (Photo/Melinda Waldrop) 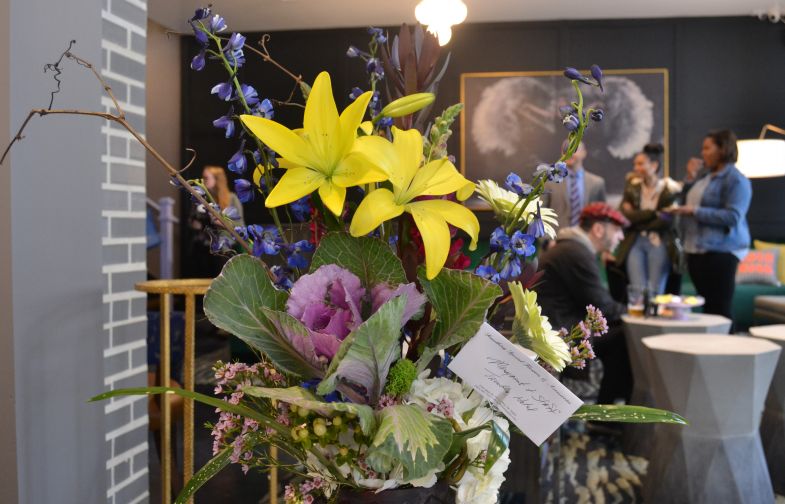 Guests mingle in the lobby of Hotel Trundle during its soft opening on Monday. (Photo/Melinda Waldrop) 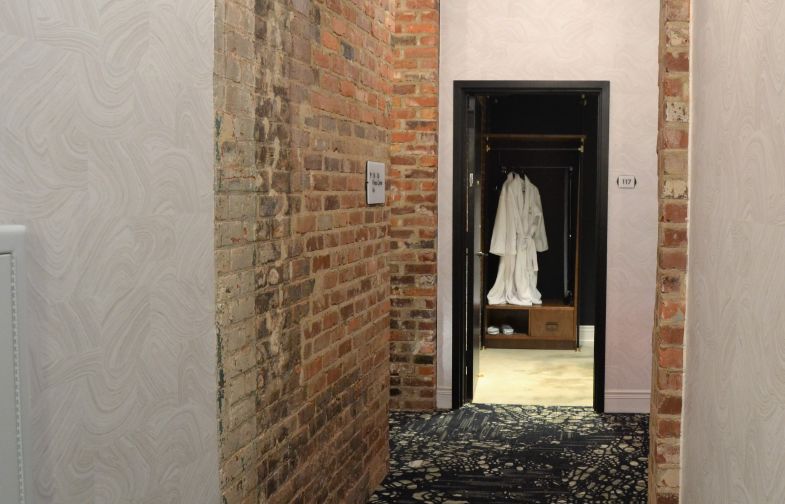 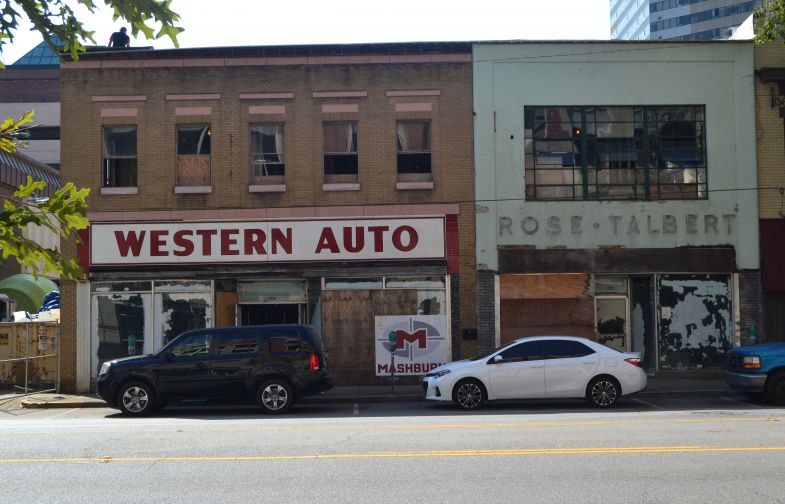 Hotel Trundle has rejuvenated a downtown block once occupied by the Western Auto and Rose Talbert buildings. (Photo/Melinda Waldrop) 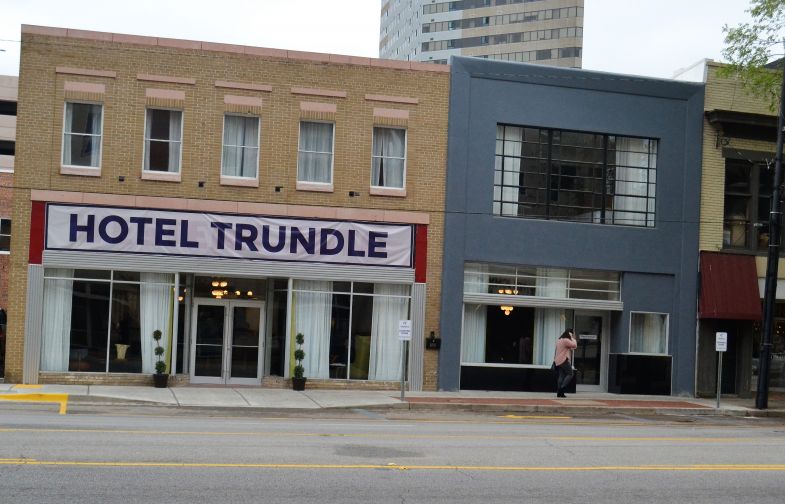 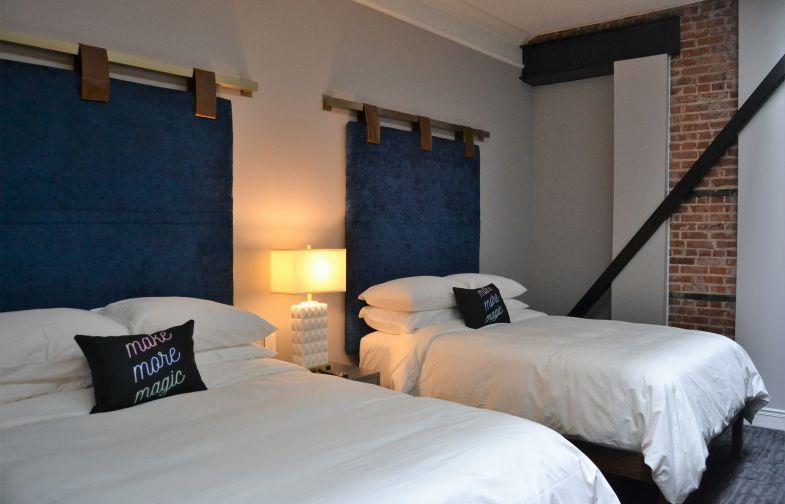 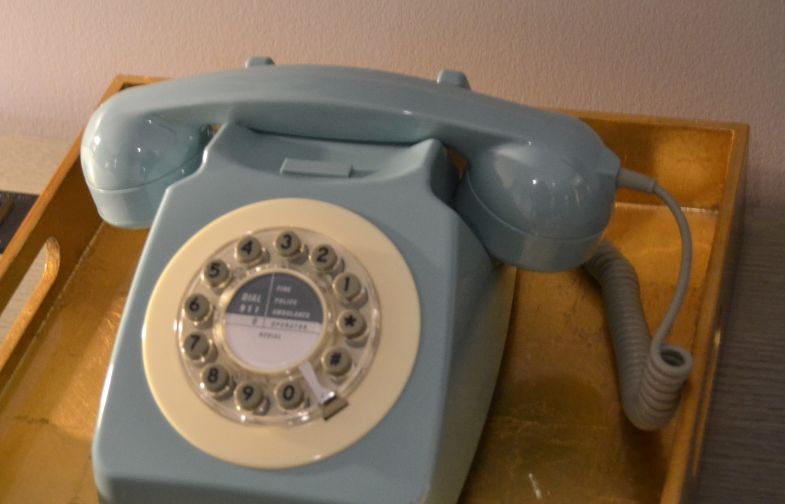 A rotary phone is one of the distinctive touches in guest rooms at Hotel Trundle. (Photo/Melinda Waldrop) 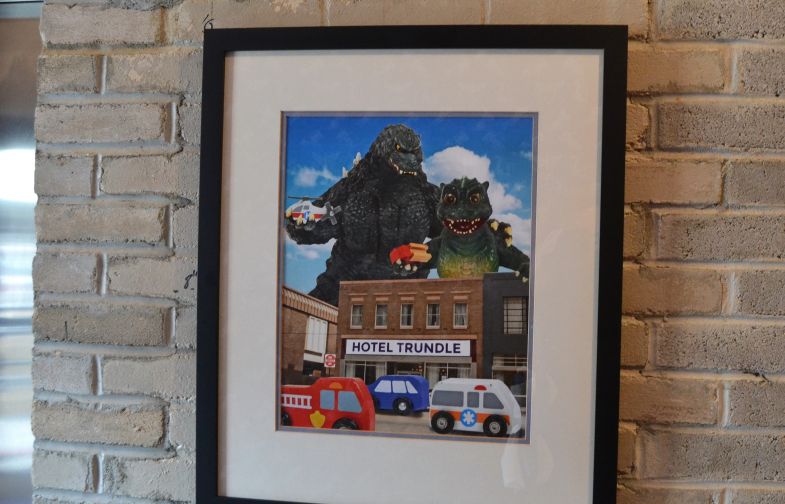 A sample of the quirky artwork lining the hallways of Hotel Trundle. (Photo/Melinda Waldrop) 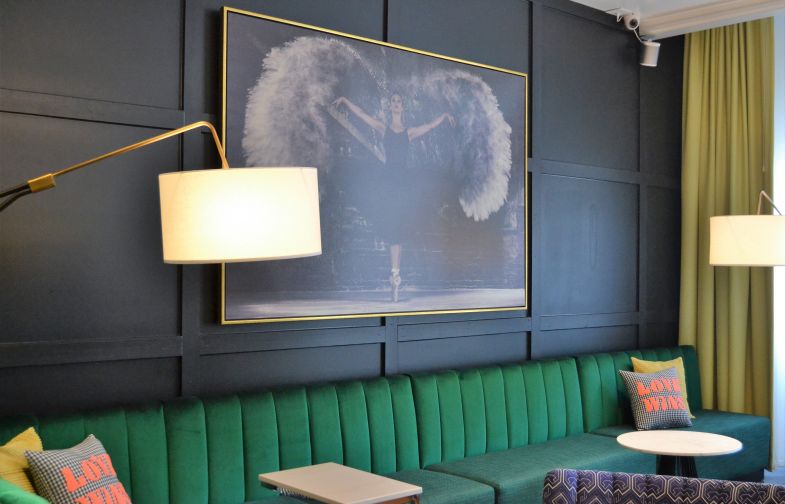 An example of the artwork on display in the lobby of Hotel Trundle. (Photo/Melinda Waldrop) 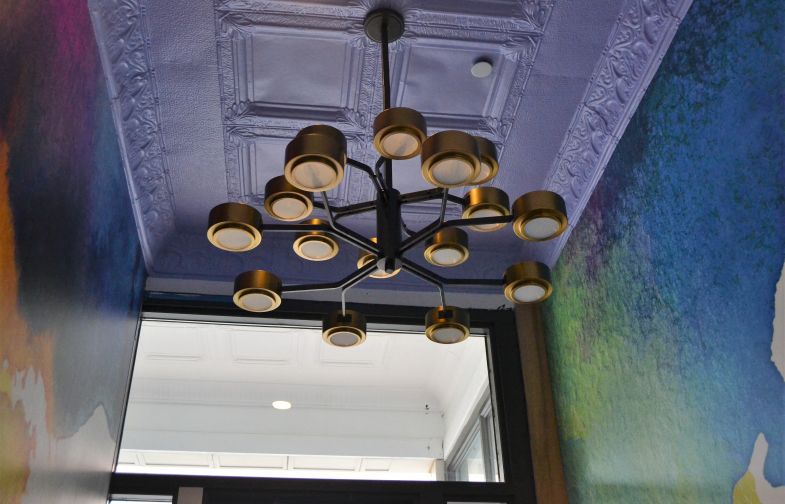 A splash of color near the Sumter Street guest entrance. (Photo/Melinda Waldrop) 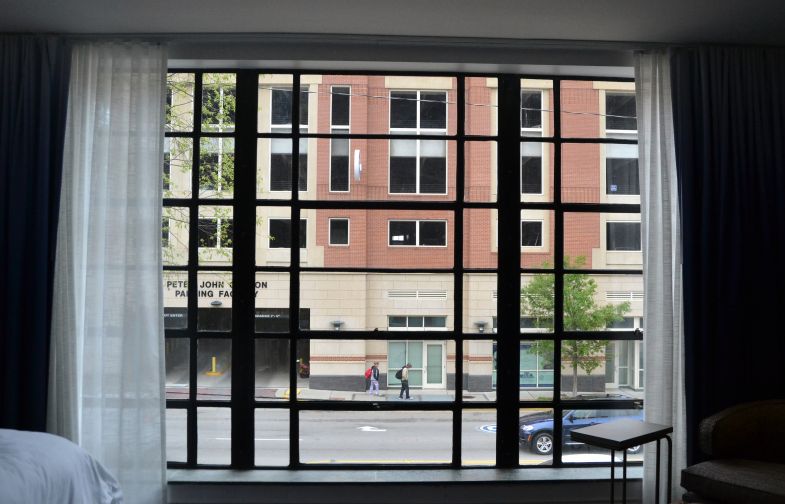 An expansive view of Taylor Street from the master suite. (Photo/Melinda Waldrop) 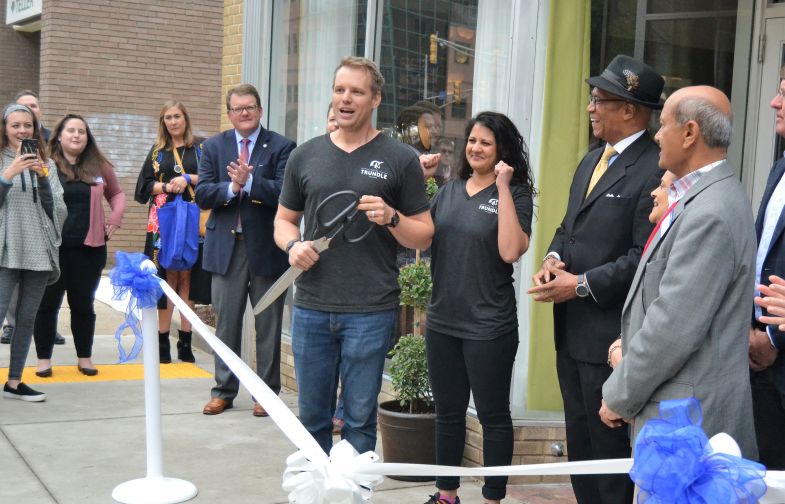 Marcus Munse (with scissors) and co-owner Rita Patel (behind him) prepare to cut the ribbon during Monday's soft opening of Hotel Trundle. (Photo/Melinda Waldrop) 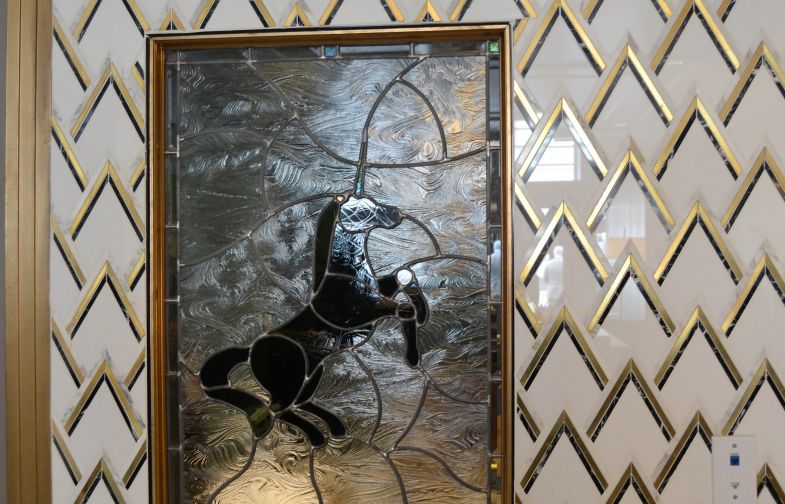 Hotel Trundle co-owner Rita Patel said unicorns are the hotel's spirit animal because it was a dream she wished would come true. (Photo/Melinda Waldrop)

For a moment, Rita Patel had to fight back tears.

Seeing a dream become reality can have that effect on a person.

Patel and her husband and investment partner, Marcus Munse, celebrated the soft opening of Hotel Trundle, a 41-room boutique establishment in downtown Columbia, on Monday afternoon. Located at renovated adjacent buildings at 1519 Sumter St., former home of Powell Furniture, and 1222 and 1224 Taylor St., former sites of Rose-Talbert Paints and Western Auto, respectively, the hotel has transformed a block that had fallen into disrepair. 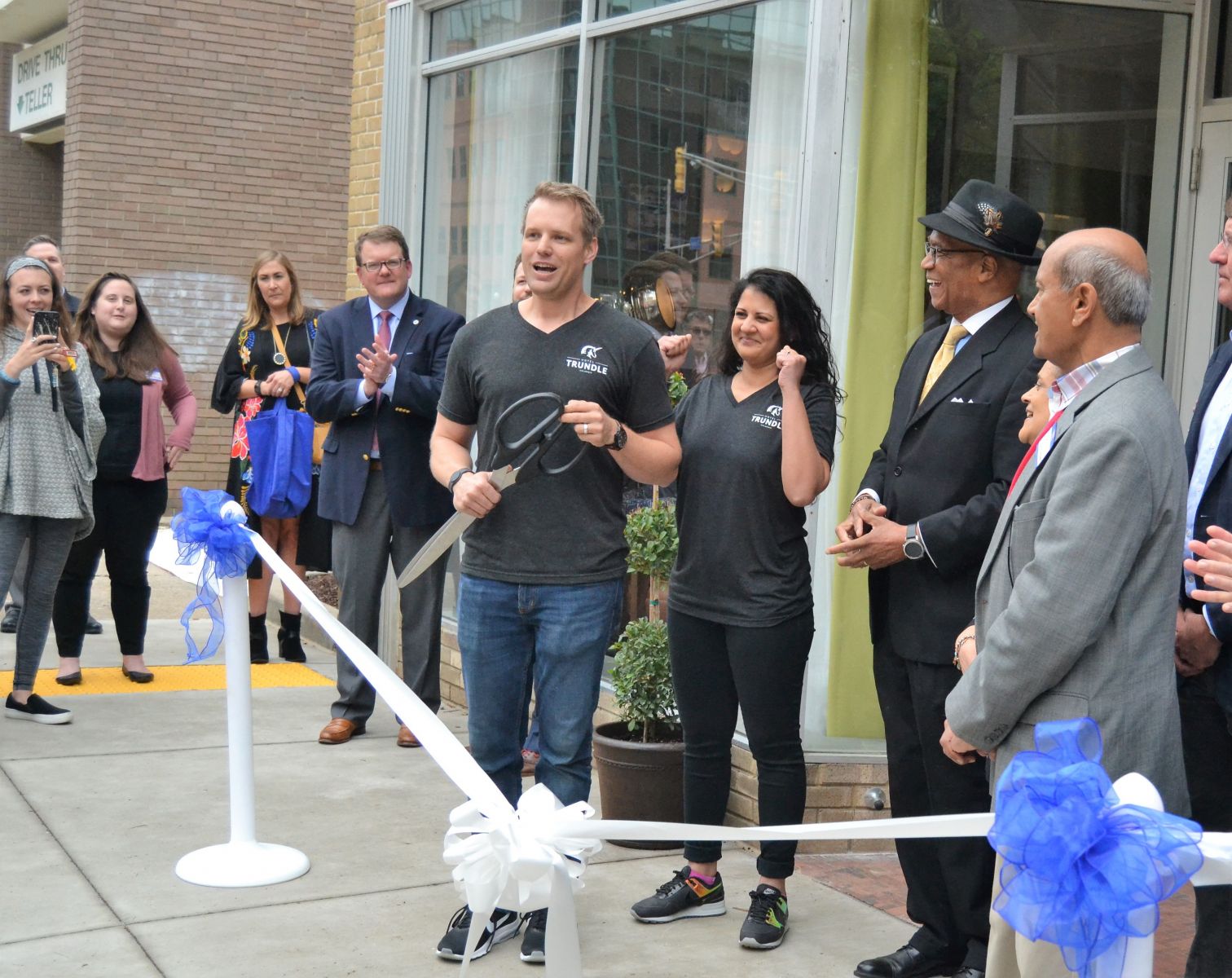 “Hotel Trundle is our unicorn opportunity,” Patel said. “It was always something that we were dreaming of and just never thought would ever become real. With everything that aligned and worked out, here we are.”

Patel and Munse were announced in November 2016 as the investment partners behind Hotel Trundle. In July 2016, design firm The Boudreaux Group teamed with Robert Lewis and Chris Rogers of Rogers, Lewis, Jackson, Mann and Quinn Attorneys at Law and a silent partner to form Sumter LLC to rehabilitate and market the buildings in conjunction with NAI Avant.

For more than a year, passing pedestrians caught glimpses of the extreme makeover going on inside the property as decades of neglect were hammered away. A combined 23,000-square-foot project with The Boudreaux Group’s new offices at 1519 Sumter St., the renovations followed painstaking guidelines to qualify for historical tax credits and preserve as much of the buildings’ original features as possible.

New offices of the Boudreaux Group, which served as the project architect, sit above nine hotel rooms on the first floor of the Sumter Street building, and a corridor winds in an L shape to two stories of rooms facing Taylor Street. Mashburn Construction was the project contractor, and Pond and Co. Interiors handled the interior design.

On Monday, the months of work took center stage. Guests milled about a spacious lobby decorated with paintings by local artists and peeked into rooms open for display. From the unicorn mural on one wall to the plush, embroidered bathrobes hanging in closets to the tin ceiling tiles, rescued when possible from the original buildings and painted lavender, attention to detail was on display. 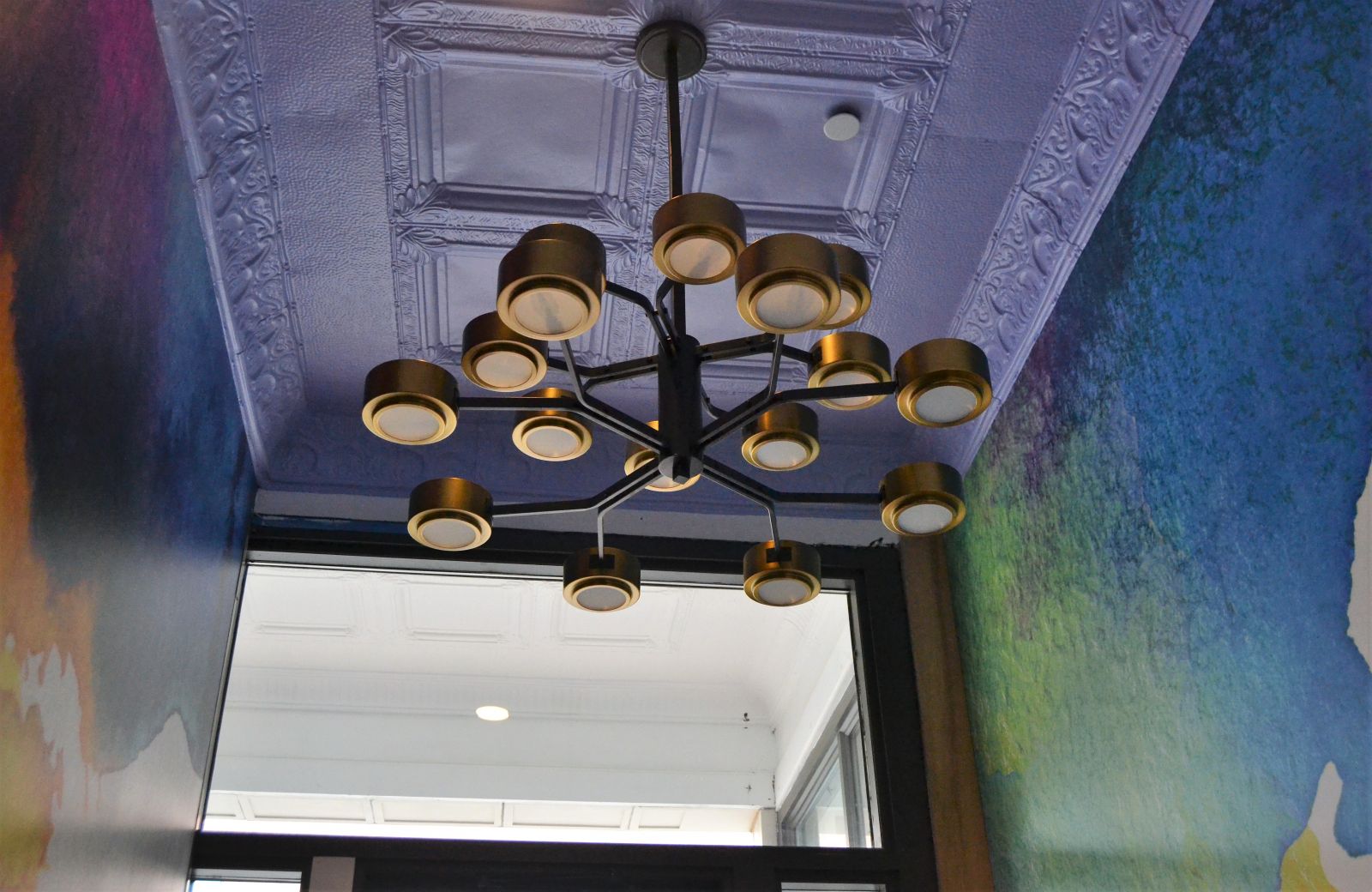 Munse understands how guests feel. “I have a favorite piece in every room,” he said.

Rooms with one large or two smaller beds, some featuring roomy seating areas, drew oohs and ahs when visitors took in large skylights and other distinct touches, such as sky blue rotary phones and rainbow-hued toiletry trays. In the master suite on the second floor, a huge picture window opened onto an expansive view of Taylor Street. 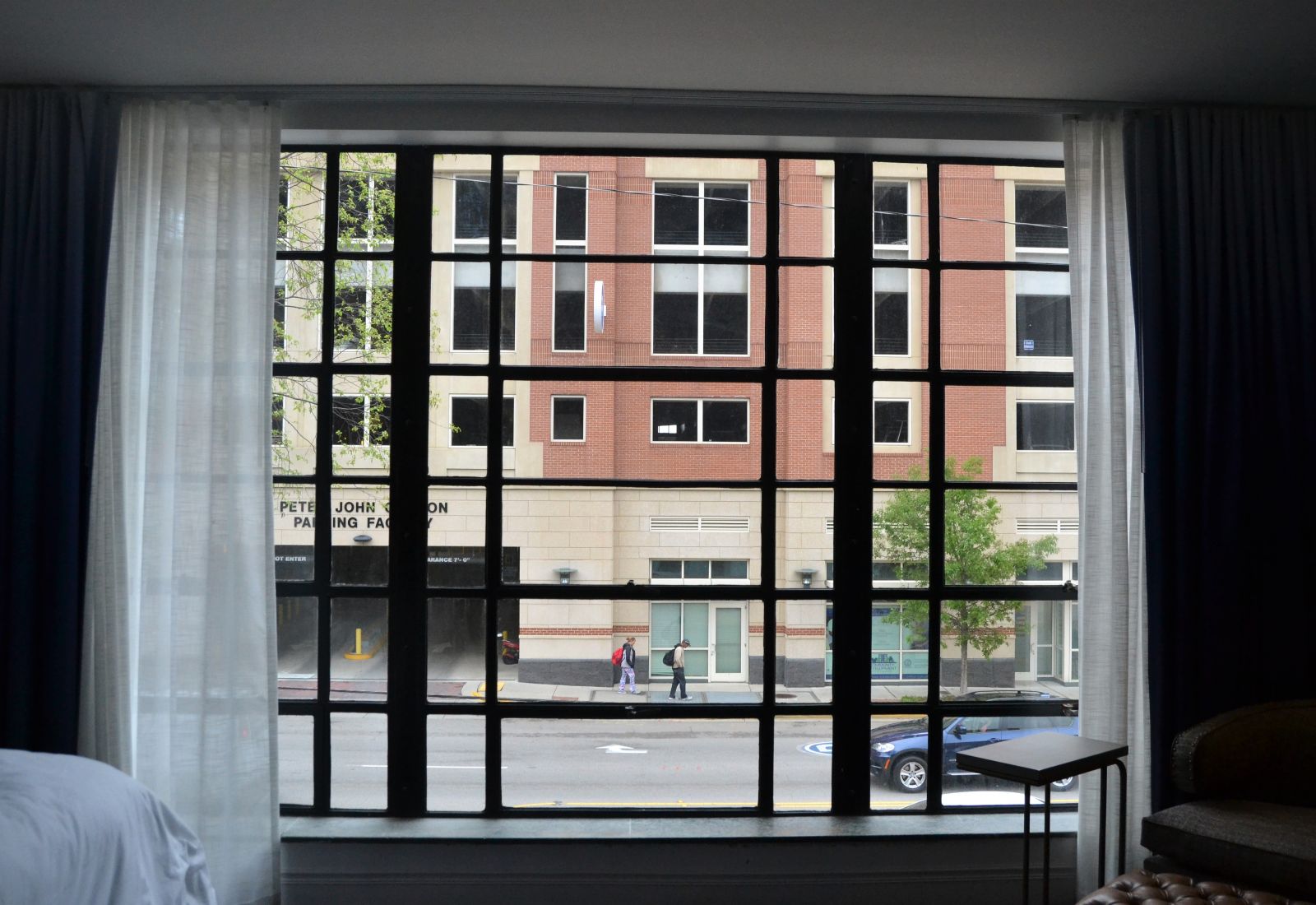 But it was far from an easy decision.

“I love all of the artwork that Lauren Dillon did,” Patel said. “I love Cedric Umoja’s mural. I just can’t decide. I love the emerald green banquette and the beautiful photo that Ashley Concannon did. I mean, it just all flows so well and seamlessly together.” 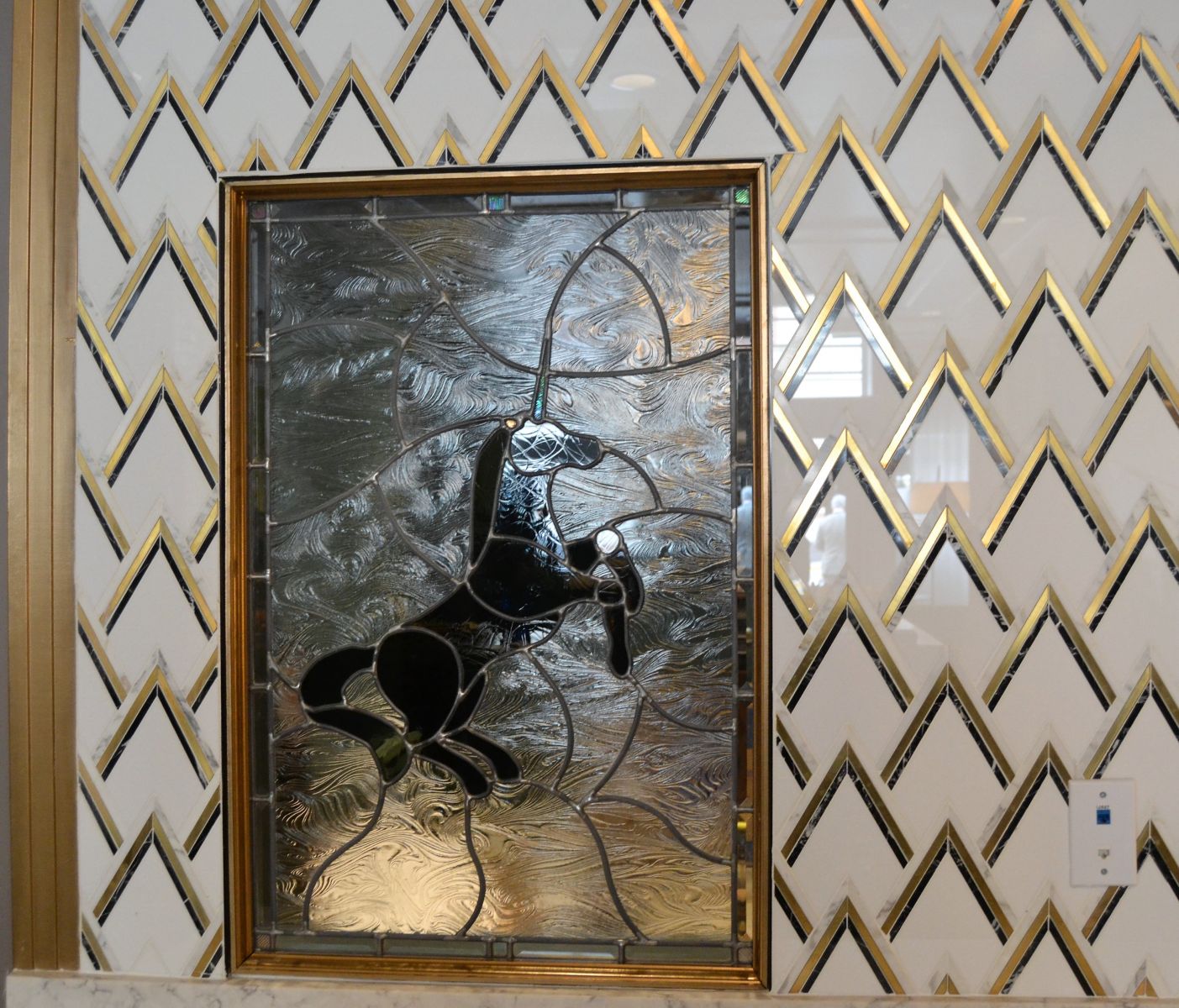 On the back wall of the staircase, the words “Welcome to Columbia South Carolina” are highlighted in a painted search-a-word puzzle that also contains the names of Patel and Munse’s children, Easton and Nevaan.

Hotel Trundle was set to welcome its first guest, complete with champagne and confetti, later Monday evening. Others would clearly follow in short order, as visitors stopped Munse to inquire about rooms for a bridal party.

“We’re very excited,” Patel said, pausing to remember the 2016 night when she and her husband described their vision to an audience at the Capital City Club. “At that time, it was an idea, and to have it come to this point and be exactly what I envisioned it to be … it’s just awesome.”